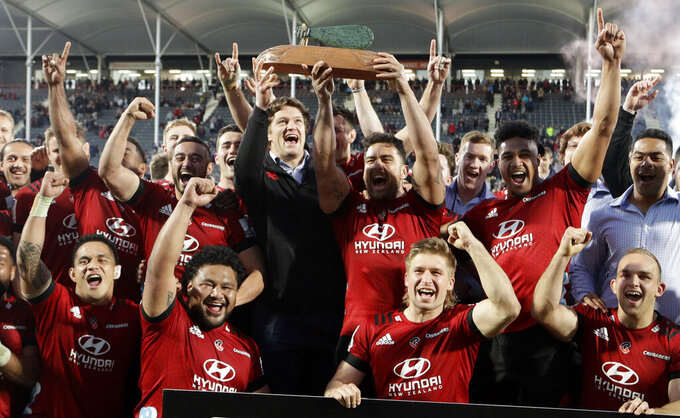 WELLINGTON, New Zealand (AP) — An outbreak of COVID-19 in New Zealand’s largest city has affected the last round of matches in Super Rugby Aotearoa.

Sunday’s scheduled match between the Blues and Crusaders, the newly-crowned champions, has been canceled because Auckland will be at lockdown Level 3 under which major sports events are prohibited.

The Blues been set to host the Crusaders in front of a crowd of 43,000 at Auckland’s Eden Park.

The match between the Highlanders and Hurricanes on Saturday will go ahead without fans at Dunedin’s indoor stadium.

Until this week, New Zealand had been one of a few countries in which sports events were able to go ahead with full crowds in stadiums.

New Zealand went 102 days without a case of community transmission of COVID-19 until the first of the new Auckland cases were detected.

Prime Minister Jacinda Ardern announced Friday that a Level 3 lockdown in Auckland and Level 2 restrictions imposed on the rest of New Zealand in the middle of the week will continue for 12 days. The limited lockdowns were initially imposed for 72 hours and were due to expire Friday.

The Auckland outbreak currently involves 29 cases which are thought to be part of a single cluster of related individuals. Ardern said the number of infections is expected to grow and the lockdown has been extended to allow health officials to trace and isolate new cases.

The cancellation of the match between the Crusaders and the Blues has no effect on the outcome of the competition. The Christchurch-based Crusaders clinched the title with a round to spare when they beat the Dunedin-based Highlanders last weekend.

But the capacity crowd at Eden Park would have been a major financial boost to the hosts. The Blues said earlier this week they might have faced insolvency if Super Rugby Aotearoa matches had not been able to go ahead with crowds. More than 43,000 fans watched the match between the Blues and Hurricanes at Eden Park in the tournament’s opening round.

Super Rugby Aotearoa featured New Zealand’s five Super Rugby teams playing each other on a home-and-away basis over a 10-week season, without playoffs. The tournament was hastily organized when the full Super Rugby competition — involving teams from South Africa, Argentina, Australia, Japan and New Zealand — was abandoned in March because of the coronavirus pandemic.