COVID-19 testing in Fargo scrubbed due to supply shortage 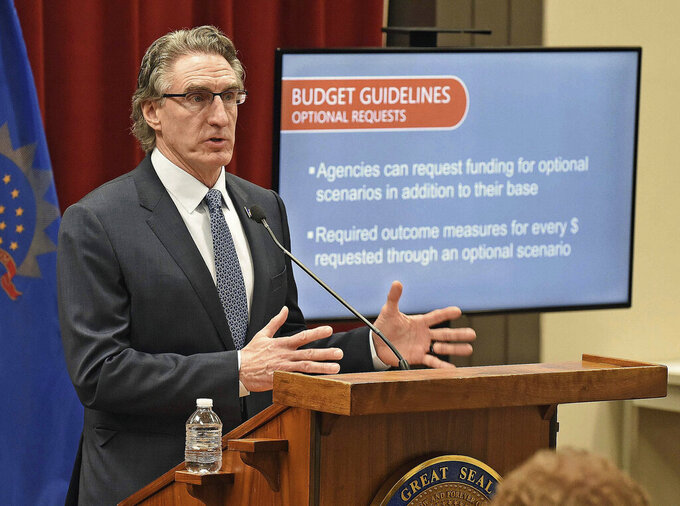 North Dakota Governor Doug Burgum issues budget guidelines to North Dakota state agencies for the 2021-23 biennium at a press briefing on Friday morning, May 1, 2020 at the state capitol in Bismarck, N.D.. Gov. Burgum was joined at the briefing by Office of Management & Budget director Joe Morrissette. (Tom Stromme/The Bismarck Tribune via AP)

BISMARCK, N.D. (AP) — A lack of testing supplies for COVID-19 forced a cancellation of mass screenings Monday in Fargo, which is North Dakota’s largest metropolitan area and the state’s biggest coronavirus hot spot.

Gov. Doug Burgum said at his daily briefing that events planned Monday at the Fargodome and in Williston on Tuesday were postponed due to a temporary shortage of consumable components for machines needed to analyze the tests at the state Department of Health’s microbiology lab in Bismarck.

Burgum blamed the “frustrating interruption” on a supply chain issue that has caused a backlog of about 5,000 tests over the past few days.

About 80% of coronavirus tests are conducted at the state lab, Burgum said.

“No (mass) testing has been cancelled,” Burgum said. “(Mass) Testing only has been postponed.”

He did not know when the mass testing events would be rescheduled or when the backlog would be caught up. He said the testing equipment at the state lab that can handle increased testing should be online Tuesday.

“We have plenty of kits and plenty of people collecting,” he said.

Burgum has said the state’s increased testing capacity, its low positive test rate for the coronavirus and the existing hospital bed capacity to handle patients were among the positive signs for reopening businesses with precautions on Friday. The plan’s been dubbed “ND Smart Restart.”

Burgum has said the state likely will have the capacity for 4,000 tests daily in May, and 6,000 in June. Only 1,401 tests were conducted on Sunday, health officials reported.

“We remain completely and totally committed to expanding our testing capacity,” he said.

The mass screenings were set for Sunday and Monday afternoons at the Fargodome and were reserved for the close contacts of people who have tested positive for COVID-19 and for essential workers.

Fargo Cass Public Health said “the goal of 500 tests” was reached on Sunday at the Fargodome.

Health officials on Monday reported the number of people in the state testing positive for COVID-19 has grown to 1,225, up 34 from the day before.

Cass County reports 25 new positive cases of the coronavirus, bringing the county’s total to 630 cases, more than double any other county in North Dakota.

North Dakota has reported 25 deaths from COVID-19 complications but none were reported on Monday.

Burgum also said he will limit press conferences to three times a week instead of five, on Monday, Wednesday and Friday. Burgum said Monday was his 44th press conference on the coronavirus since March.