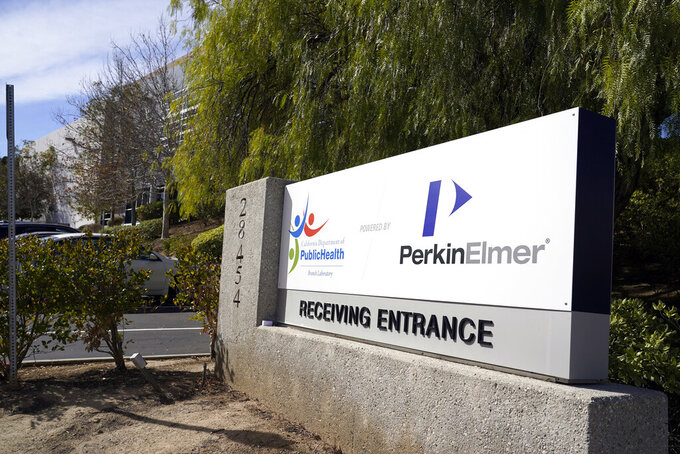 FILE - In this Feb. 11, 2021, file photo is the exterior of the PerkinElmer lab in Valencia, Calif. A whistleblower who accused the COVID-19 testing lab in California of improper work is being sued by the company for violating a confidentiality agreement. (AP Photo/Marcio Jose Sanchez, File)

LOS ANGELES (AP) — A whistleblower who accused a COVID-19 testing lab she managed in California of improper work is being sued by the company for violating a confidentiality agreement.

PerkinElmer Inc. sued Mahnaz Salem in federal court in Los Angeles on Monday, alleging she breached her contract that barred her from disclosing confidential or proprietary information including “COVID-19 testing results, testing procedures and protocol, and testing equipment capabilities and performance.”

The Massachusetts-based diagnostics company has a $1.4-billion COVID-19 testing contract with the state.

Salem was laboratory services manager for about a month at PerkinElmer's testing laboratory in Valencia, north of Los Angeles.

She was among employees who told Sacramento TV station CBS13 this month that the laboratory was making unauthorized changes to improve its FDA-approved testing procedures, using patient samples.

“We cannot do experiments while we are testing patient samples,” Dr. Salem told the station.

The California Department of Public Health is investigating that and other whistleblower allegations, which included reports of inaccurate results sent to patients, contaminated tests and workers sleeping on the job. The health department acknowledged then that at least “38 samples were reported incorrectly” because of mix-ups in samples, but it said patients were promptly notified.

PerkinElmer's lawsuit doesn’t make any specific mention of those allegations. It alleges that Salem unlawfully accessed the company computer system and forwarded information to her personal email account this month on “testing procedures, protocol, and results.”

The lawsuit also contends that in January, Salem had accepted a job with a different competitor laboratory, although the lawsuit doesn’t contend that she passed on any confidential information to the firm.

On Monday state officials said an inspection of the laboratory in December — before the other allegations came up — found “significant deficiencies” at the laboratory, blaming them, in part, on the rapid ramp-up they required under the terms of the state contract.

Based on findings from an inspection in early September, a fraction of 1% of the more than 1.5 million tests processed at the Valencia Branch Laboratory had problems, the state said in a preliminary report. The $25 million lab that opened in October north of Los Angeles was unable to test about 250 samples (0.017%) due to lab errors, the state said. It issued corrected reports for about 60 (0.0039%) samples.

“We have already addressed the issues that emerged in the early days since the Valencia testing site was established,” Prahlad Singh, the company’s president and chief executive officer, said in a statement Monday.