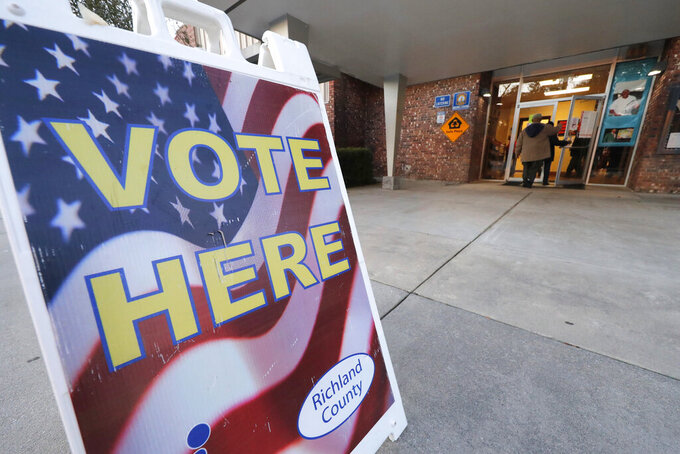 People people enter a polling station to vote as the polls open in the morning, in the Greenview section of Columbia, S.C., Saturday, Feb. 29, 2020. (AP Photo/Gerald Herbert)

COLUMBIA, S.C. (AP) — Election day is going to be a little different in South Carolina because of COVID-19.

About 250 polling places had to be moved for Tuesday's primaries because buildings were still closed or did not want to host large groups of people because of the pandemic, said state Election Commission spokesman Chris Whitmire.

About 150 members of the South Carolina State Guard will help out in some polling places to make up for the absence of poll workers, many of whom are staying home because they are older or otherwise vulnerable to developing complications from the virus, officials said.

Thanks to extra money given to the state Election Commission by lawmakers, poll workers will be paid $165 for a day of training and a day of voting, up from $135, Whitmire said.

Reduced polling staff could slow the voting process, along with extra steps that are being taken to sanitize balloting locations. Workers will be provided with protective masks and face shields and voters will likely be given cotton swabs to press buttons on voting machines that also will be sanitized.

COVID-19 could also mean a longer election night. Returns may be slower to come in than usual because of a surge in mailed-in absentee ballots. The General Assembly decided last month to allow any voter to cast an absentee ballot by mail because of the pandemic.

State election officials mailed out about 167,000 absentee ballots and had 121,000 of them returned as of last week. The record for mailed-in ballots in a South Carolina election was nearly 140,000 in the 2016 general election, when 2.1 million people voted. In June 2016, the most recent primaries, fewer than 418,000 people voted.

The state Election Commission has told counties that if counting extends to the early morning hours Wednesday, they can secure the ballots, get some sleep and come back later.

Also up for election this year are all 170 General Assembly seats. Only 1 in 5 South Carolina House and Senate members face primary opposition, including just 21 of 124 House members.

The most interesting contest is in Anderson County, where the state Republican Party is campaigning against one of its own members, Rep. Jonathon Hill. The party sent mailers backing Hill’s opponent for the GOP nomination, optometrist Vaughn Parfitt.

Hill, who is seeking a fourth term, often rankles members of his own party and has spent several years tangling with House Majority Leader Gary Simrill. He is the only Republican House member not in the House Republican Caucus.

Simrill led an effort to suspend Hill after Hill shared details of what were supposed to be private conversations and gave lawmakers’ cellphone numbers to his upset constituents.