Cowboys' Prescott has eye on present without long-term deal 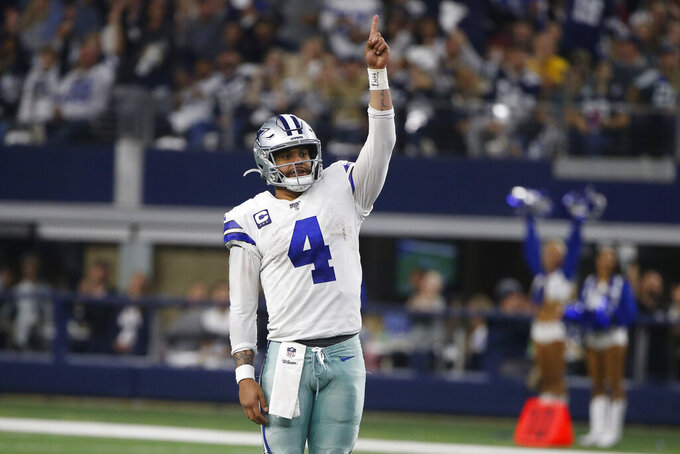 FILE-Dallas Cowboys quarterback Dak Prescott (4) celebrates a touchdown against the Washington Redskins during the second half of an NFL football game in Arlington, Texas, Sunday, Dec. 15, 2019. Prescott stuck with his virtual hiatus trying to get a long-term contract that never came during the offseason. Now that the star quarterback of the Dallas Cowboys is in the building preparing to play on the $31.4 million franchise tag, Prescott doesn't see an immediate need for questions about his future with America's Team. (AP Photo/Ron Jenkins, File)

Dak Prescott stuck with his virtual hiatus trying to get a long-term contract that never came during the offseason.

Now that the star quarterback of the Dallas Cowboys is in the building preparing to play on the $31.4 million franchise tag, Prescott doesn't see an immediate need for questions about his future with America's Team.

“I’m not a guy that looks at my future to be honest,” Prescott said Wednesday, two days before the first practice of training camp for the Cowboys.

“With things that have happened to me personally, with the place this world is in, with the crisis we’re in with COVID, with social injustice, I don’t look too far ahead.”

To be clear, Prescott found several ways to say negotiations that went on for more than a year without a deal didn't change his desire to stay.

He was an almost instant star with the Cowboys, winning 2016 NFL Offensive Rookie of the Year as a fourth-round pick who replaced injured 10-year starter Tony Romo during his first preseason. Prescott led a franchise-record 11-game winning streak that carried Dallas to the No. 1 seed in the NFC.

After three years of enjoying one of the best bargains in the NFL — but capped by a season that started with high expectations and ended without a trip to the playoffs — owner Jerry Jones is similarly unconcerned about whether a long-term deal can get done. Prescott can't sign for more than one year until after the 2020 season.

“We think he’s the quarterback of the future,” Jones said in his annual pre-camp news conference, held virtually from offices at team headquarters rather than sunny, cool Oxnard, California, site of the previous eight camps before the pandemic led the NFL to order all teams to stay home for preseason training. “We just couldn’t get together at this particular point.”

Jones said the uncertainty of the pandemic played a role in an agreement not being reached, noting that only two of 14 players with franchise tags signed long-term contracts.

Executive vice president of personnel Stephen Jones talked to Prescott the day of the deadline in a last-ditch effort to get a long-term deal done, but it was too late for an agreement. Still, Stephen Jones said there aren't hard feelings.

“He’s so fired up about this team, about this season and about our future,” Stephen Jones said. “We ultimately know that we’re going to have to figure out how to get this done. I’m more convinced than ever that we will get it done.”

It was an important offseason for Prescott because of coach Mike McCarthy replacing Jason Garrett.

The pandemic prevented face-to-face meetings of the coach who won a Super Bowl with Aaron Rodgers and his new quarterback, and the contract situation kept them from having virtual meetings. Now they're making up for lost time.

“With us being around each other for the first time, I’ve really enjoyed his personality,” McCarthy said. “He’s very upbeat, very driven. So I’d say he’s kind of picked up where he left off based on what I’ve been told about him as far as how he operates.”

Prescott had a football field put in the backyard of his Dallas-area home during the offseason, allowing plenty of time to work with receivers Amari Cooper, Michael Gallup and CeeDee Lamb, the rookie first-round pick.

And now Prescott has moved into the hotel that's part of team headquarters, right next to the indoor practice field and a few extra paces from the outdoor fields where most of the camp practices will be held starting Friday morning.

Pandemic-related NFL guidelines prohibited teams from sequestering players at camp without their consent. The Cowboys made the hotel available to their players, and Prescott estimated 90% of them had essentially agreed to create their own bubble.

“For me it’s about trying to stay as safe as I can, as healthy as I can without knowing the true future of where this season’s going to go,” Prescott said. “Because as this season gets to playing out, I think part of it is: The healthiest team wins.”

Prescott's financial health is better than ever, now that he has a top salary to go with the numerous endorsements that started flowing as soon as he started winning four years ago. As for the long-term financial health, that's a chat for another day for a two-time Pro Bowler who got his first playoff victory in his second postseason trip in 2018.

“I’ve got dreams of being a Dallas Cowboy till I’m done throwing the football,” Prescott said. “None of that’s going to change just because we couldn’t reach an agreement there for this season. But as I said I’m a Cowboy right now, and that’s all that matters and that’s my whole focus.”

NOTES: Jerry Jones says he anticipates the Cowboys playing in front of fans this season. He wouldn't speculate on a number. AT&T Stadium's seating capacity is about 80,000, and coronavirus guidelines in Texas allow for 50% capacity. The Cowboys cleared their COVID-19 reserve list early this week by activating WR Jon'Vea Johnson and CB Saivion Smith.