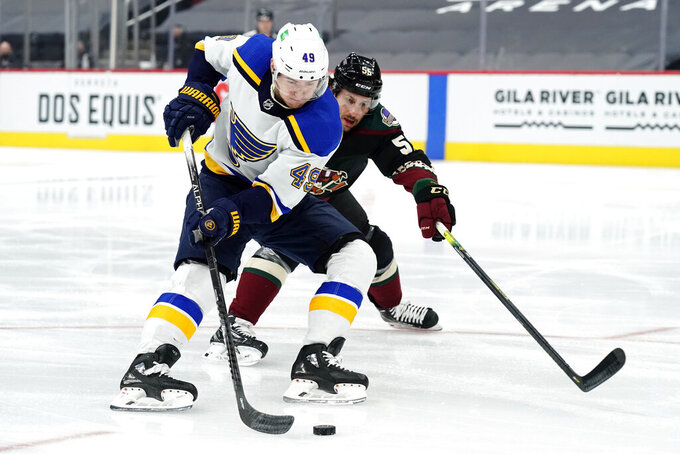 GLENDALE, Ariz. (AP) — The Arizona Coyotes won Game 7 and will not move on to the next round.

Strange as it sounds, that's life in a pandemic-altered NHL season.

Darcy Kuemper stopped 24 shots, Clayton Keller scored and the Coyotes closed out their seven-game series against the St. Louis Blues with a 1-0 win Monday.

“It was a fun series,” Keller said. “Almost every game was tight and it had a playoff-like atmosphere. It was a step in the right direction and we finally get to play another team.”

The shifting dynamics of playing hockey in a pandemic led to the Blues and Coyotes playing seven straight games against each other, a first in NHL or NBA regular-season history.

The teams split the first six games, and the Coyotes were at their shutdown best in Game 7.

Keller scored in the second period. Kuemper, making his fifth start in the series, earned his first shutout this season and No. 19 for his career.

“If you're going to win in the playoffs, you've got to win ugly games,” Coyotes coach Rick Tocchet said. “The puck was bouncing a little bit tonight, it was a mucking type of game. You've got to win these games, close them out, and we did.”

The Blues had been on a roll since the series shifted to the desert, scoring eight goals in two games. They bogged down in the finale, unable to get many good scoring chances or solve Kuemper.

“We've got to find a way to create some good chances,” Blues center Ryan O'Reilly said. “I felt we were to the outside too much, just shooting and not really getting good looks.”

Home ice was not been much of an advantage in this seven-game series.

Kuemper and Binnington were sharp after getting Saturday's game off, each making some tough saves in the first period.

Arizona's Derick Brassard was the closest to breaking through in the first when a wraparound attempt popped up and hit Binnington on the back before bouncing away.

St. Louis ramped up the pressure to start the second period, but the Coyotes scored when Keller beat Binnington on the glove side from the left circle for his fifth of the season.

The Blues kept buzzing in the period and Kuemper made some difficult saves, shutting them down during a 5-on-3 power play. Conor Garland nearly put the Coyotes up 2-0 late in the period after a slick move, but he hit the far post.

Kuemper made a good positional save midway through the third period, sliding over to stop Vince Dunn on an odd-man rush, and another after the Blues pulled Binnington with a minute left.

“There wasn't a whole lot of room on either side tonight,” Blues center Brayden Schenn said. "Didn't get the result tonight and I think for both teams, we're looking forward to moving on and playing different teams.

KELLER AND THE BLUES

Keller grew up in Chesterfield, Missouri, so he has a strong connection to the Blues. He also seems to play his best against his hometown team.

Keller has five goals and 10 assists against the Blues, the most points he has scored against any NHL team.

“It's the little things, details, playing good defense,” he said. “Toc always says situational hockey and I think we did a good job of that tonight.”

The Blues open a two-game home series against San Jose on Thursday.

The Coyotes host the Los Angeles Kings in the first of two games on Thursday.