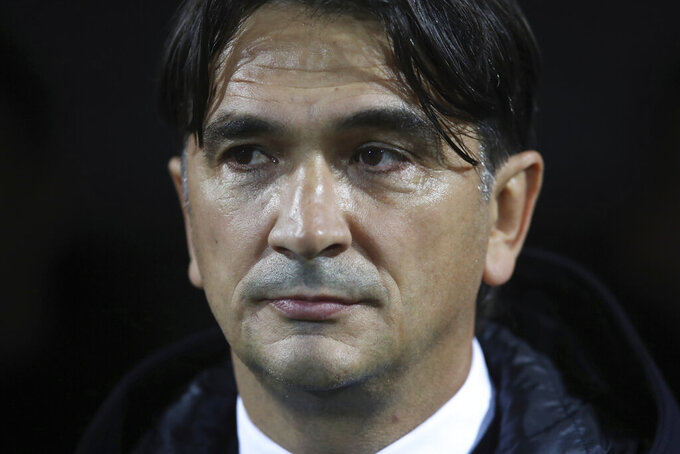 FILE - In this Saturday, Nov. 16, 2019 file photo, Croatia coach Zlatko Dalic looks at the field prior to the Euro 2020 group E qualifying soccer match between Croatia and Slovakia at the Rujevica stadium in Rijeka, Croatia. The last two World Cup winners (Joachim Loew of Germany and Didier Deschamps of France). The defending European champion (Fernando Santos of Portugal). And a World Cup finalist (Zlatko Dalić of Croatia). Not to mention a Champions League winner (Luis Enrique of Spain) and a Premier League champion (Roberto Mancini of Italy). There is no shortage of accomplished coaches at the European Championship. (AP Photo/Daniel Kasap, File)

The Croatian delegation had planned to stay and train in St. Andrews, the east-coast town that's the traditional home of golf, to prepare for two group-stage games in Glasgow and one in London.

Citing “a recommendation from UEFA to change the location of its team base camp, due to the potential impact of the Scottish COVID-19 regulations on the national team’s daily routines,” the federation said it will now stay at home in Croatia.

Officials were “unwilling to risk the possibility of positive PCR results causing a large part of the team and team staff to be issued mandatory self-isolation orders,” the federation said.

The Czech team had booked a camp at the national training center in Edinburgh but decided to stay in Prague and only fly to Britain for its matches.

The Czechs left for a training camp in northern Italy on Monday after all players and staff members tested negative. They play a warm up against Italy in Bologna on Friday.

UEFA has allowed teams to name 26-man squads instead of 23 to protect against disruption from infections before games.

Croatia will now continue training at its pre-tournament base in Rovinj and fly in for games.

“This is the best outcome that we could reach in these strange times,” coach Zlatko Dalić said, “and we now have a unique opportunity to spend this tournament in our own country.”

The Scotland team, which qualified for the postponed tournament one year after its group rivals, is staying in the north-east of England at Middlesbrough's training base.