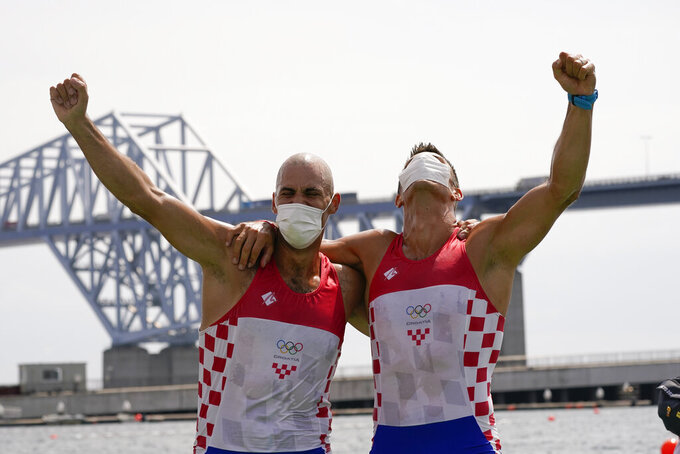 The sweep pair looked pretty good. Two oars instead of four, one for each brother, with a different rhythm to the precision and teamwork.

Five years later, the new boat in the new Games produced the same dominating result. The Sinkovic duo charged to an early lead and held on for an easy victory Thursday in the men's pair at Sea Forest Waterway.

Now, having conquered two different boat classes — and won a silver in quadruple sculls in 2012 — they need a new challenge. Or maybe even back to an old one: the double sculls may be calling them back next year, Valent Sinkovic said.

“The plan now is to rest,” said Valent, who at 32 is one year older than his brother. “We don't do pairs anymore. Five years is enough. We are satisfied to close it ... We are better scullers.”

When they stepped on the podium, the brothers draped their gold medals on each other. Martin first put his in his teeth, then kissed it. They are the first men's duo to win gold in the pairs and double sculls events. Kathleen Heddle and Marnie McBean of Canada did it in 1992 and 1996.

The duo had made quick work of learning the pairs, and won the 2019 world championship title. But Martin said the adjustment from the sculls to a sweep boat was much harder than they made it look.

“It was really difficult to adapt,” Martin said. “We had a lot of of challenges. I think we managed it good, psychologically. It helps that we are brothers because if we are not, I think we have much more fighting. I'm happy we've done it .... No more pairs."

The only question Thursday was whether a strong break ahead of the 1,000-meter mark might have been too early. Romanian pair Marius Cozmiuc and Ciprian Tudosa kept the Croatians within sight, but they could never pull within a half boat length of the lead before taking the silver medal.

“We executed the plan exactly as we talked with our coach,” Valent said. “We wanted to be really fast from 250 to 1,000 meters, to be in front to see everyone. We knew Romania would be our toughest competition. We just raced on what they are doing.”

The Croatians were heavily favored and everything went to plan in their race. The semifinals in the singles sculls saw the biggest upsets of the day.

Defending Olympic champion Sanita Puspure of Ireland failed to advance to Friday's final when she faded to fifth in her semifinal heat. The 39-year-old Puspure won world championship titles in 2018 and 2019 and European championship titles in 2019 and 2020. The next women's semifinal saw Kara Kohler of the United States eliminated when she finished fourth. The U.S. had won five silver medals in the event in Olympic history.

On the men's side, reigning world and European champion Oliver Zeidler was knocked out of the final when he finished fourth in his semifinal heat.

In Thursday's other medal events, Grace Pendergrast and Kerri Gowler of New Zealand won gold in the women’s pair, the country's first gold medal at the Tokyo Games. The Kiwis became only the third non-European team to win the Olympic event, and the first since Australia in 1996.

Ireland’s duo of Fintan McCarthy and Paul O’Donovan held off a late charge from Jonathan Rommelmann and Jason Osborne of Germany to win gold in the men’s lightweight double sculls.

The Irish came in as the favorite after winning the world championship title in 2019 and the European title in 2021. O'Donovan won silver in the same event with brother Gary in Rio in 2016, which was Ireland's first rowing medal.

Valentina Rodini and Federica Cesarini of Italy surged over the final 50 meters to snatch the gold medal in the women’s lightweight double sculls as the Dutch team of Marieke Keiser and Ilse Paulis collapsed.

It was Italy's first gold medal in women's rowing and Cesarini knew just how to celebrate, Tokyo style.

“First I will eat a big portion of sushi, then I will go to Casa Italia, the Italian team’s celebration place," she said.

The Dutch boat had led nearly the entire race, only to fall to third in the final 20 meters as the French team of Laura Tarantola and Claire Bove took the silver medal. The Dutch team nearly slipped out of the medals entirely, and it made the podium by only 0.01 seconds ahead of Britain.