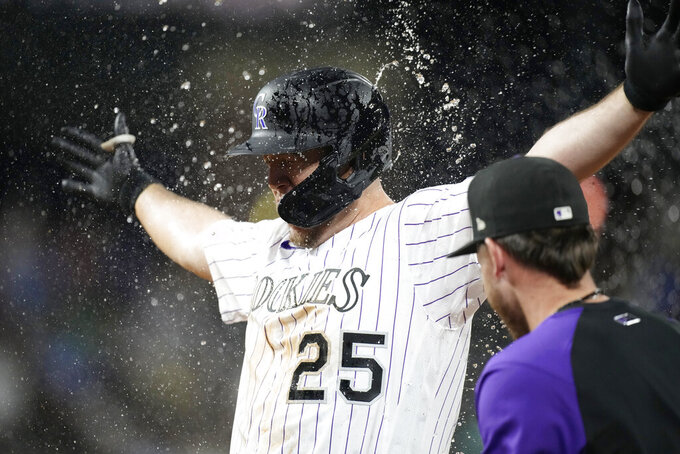 Teammates shower Colorado Rockies' C.J. Cron after he drove in the winning run against the Milwaukee Brewers in the 10th inning of a baseball game Friday, June 18, 2021, in Denver. The Rockies won 6-5. (AP Photo/David Zalubowski)

DENVER (AP) — C.J. Cron hit a game-ending single in the 10th inning, and the Colorado Rockies beat the Milwaukee Brewers 6-5 Friday night to extend their winning streak to a season-high five.

All five wins have come in the thin air of mile-high Coors Field, where the Rockies are 25-14 and batting a major league-high .281. Colorado is a major league-worst 5-27 on the road and hitting a big league-low .200.

With Ryan McMahon starting the 10th on second base under pandemic rules, Cron singled off Devin Williams (2-1).

Milwaukee has lost five in a row after winning 14 of 16, and the Brewers have lost seven straight to the Rockies, matching their most against Colorado.

The Brewers hit into four double plays and went 2 for 12 with runners in scoring position.

Colorado trailed 4-1 deficit before Trevor Story's sacrifice fly in the fifth. Pinch-hitter Yonathan Daza chased starter Corbin Burnes with an RBI double in the sixth and scored on Hampson's double off Brent Suter, and Brendan Rodgers' second double of the game gave Colorado a 5-4 lead against Brad Boxberger in the seventh.

Narváez and Willy Adames hit successive doubles in the ninth off Daniel Bard, who blew a save for the fourth time in 13 chances.

Kolten Wong led off for Milwaukee and went 1 for 5 in his first game since June 3 after missing time while on the injured list with a left oblique strain.

Brewers: RHP Adrian Houser (4-5, 3.62 ERA) is slated to start Saturday night in the third of a four-game set with the Rockies.

Rockies: LHP Austin Gomber (6-5, 3.54 ERA) has emerged as a cornerstone of the Rockies’ rotation since his acquisition from the Cardinals as part of the trade that sent Nolan Arenado to St. Louis. He has not allowed an earned run in his last 23 1/3 innings at Coors Field, the second longest such streak ever at the hitter friendly park.