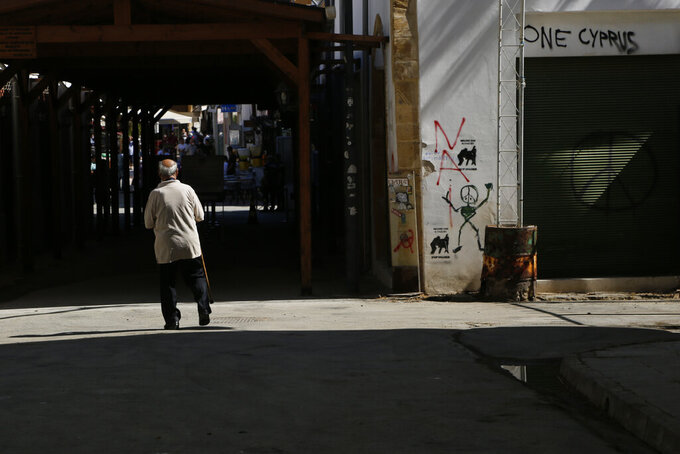 An elderly man crosses from the Geek Cypriot south, to the Turkish occupied north, at Ledra checkpoint in divided capital Nicosia, Cyprus, Friday, June 4, 2021. Ethnically split Cyprus took a key step toward a return to its normal rhythms of life amid the pandemic on Friday when nine crossing points along a United Nations-controlled buffer zone were reopened, enabling ordinary Cypriots to cross the divide. (AP Photo/Petros Karadjias)

NICOSIA, Cyprus (AP) — Ethnically split Cyprus took a key step toward a return to its routine rhythms of life amid the pandemic on Friday when nine crossing points along a United Nations-controlled buffer zone were reopened, enabling ordinary Cypriots to cross the divide.

A trickle of people began crossing on foot at the checkpoint along Ledra Street, a busy pedestrian thoroughfare that bisects the medieval center of the capital, Nicosia. Most of the crossing points are open to vehicles, but everyone crossing either northward or southward must display a negative COVID-19 test taken in the previous seven days.

Officials said the openings became possible after a significant drop in confirmed coronavirus cases on both sides.

Turkish Cypriot Djan Kaptanoglu said it was “a little bit emotional” for him to cross southward again after so many months of being unable to do so.

“I miss it so much,” he told the Associated Press as he walked past a police checkpoint after displaying COVID-19 test results that enabled him to cross.

“I wish to see a united Cyprus after all without showing our passport and IDs, but it’s OK right now, we can have free movement.”

With a digital camera dangling around his neck, Kaptanoglu said he would meet up with three friends and take plenty of photos of Eleftheria Square, a multimillion-euro project designed by the late architect Zaha Hadid that was finished earlier this year.

Nicosia municipal authorities hope the redesigned square will draw more pedestrian traffic to the old city’s core, which is encircled by a wall built by Cyprus’ Venetian rulers in the 16th century to thwart Ottoman invaders.

“Today is just for discovering again, seeing again the other half of my country,” Kaptanoglu said.

The crossings have been shut to pedestrian and vehicular traffic for more than a year following concerns that they would fan the spread of COVID-19 to either side. Since June of last year, crossings were only permitted for Turkish Cypriots working in the south, patients requiring medical treatment and diplomats.

Cyprus' Interior Ministry said that citizens from European Union member countries and the U.K., as well as foreign nationals who hold either a Cypriot or an EU visa, can also cross now.

The closings had caused much controversy as peace activists denounced the move as politically motivated. But the Cypriot government insisted it was strictly a health issue and had nothing to do with politics.

The buffer zone extends the entire 180-kilometer (120-mile) length of the east Mediterranean island nation and has been in place since 1974, when Turkey invaded in the wake of a coup aiming at union with Greece.

Both Cypriot President Nicos Anastasiades and Ersin Tatar, the leader of the breakaway Turkish Cypriots, hailed the agreement to reopen the crossing points, which the United Nations helped broker.