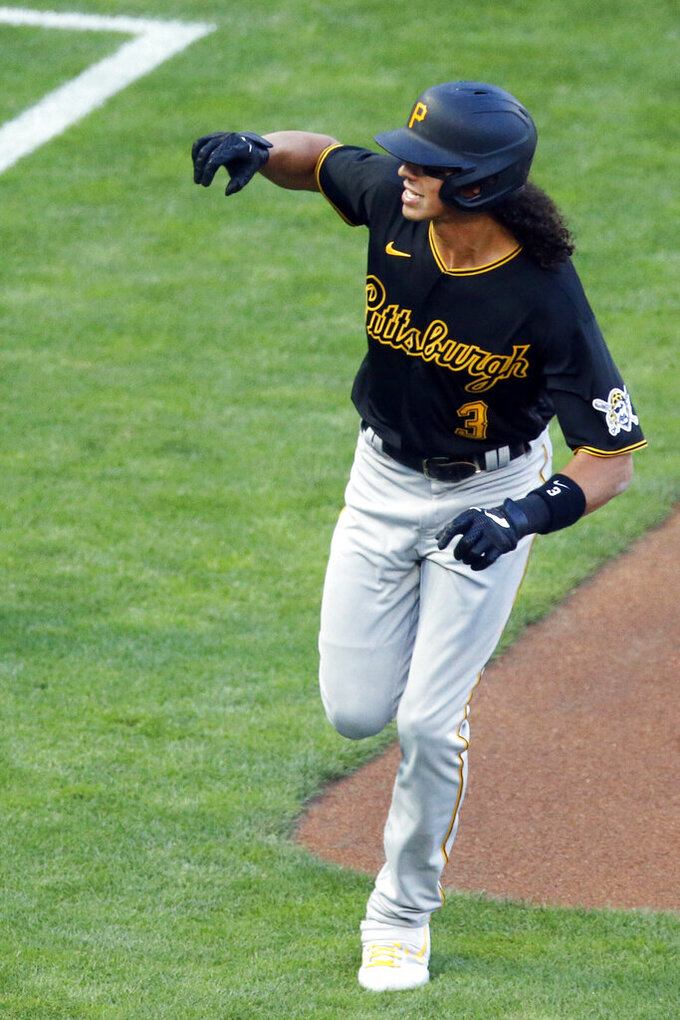 MINNEAPOLIS (AP) — Nelson Cruz's RBI single in the bottom of the ninth inning gave the Minnesota Twins a 5-4 victory Monday night over the Pittsburgh Pirates for their fourth straight win, setting off an amusing socially distant celebration tailored for the COVID-19 era.

“We don’t know what happens tomorrow. So I try to enjoy every at-bat, every game, like it’s the last one,” said Cruz, who knocked in two runs to raise his season total to 14 RBIs and match Aaron Judge for the major league lead.

Cruz drove a 1-1 fastball from Pirates reliever and former Twins draft pick Nick Burdi (0-1) over the head of center fielder Cole Tucker with runners at second and third and one out.

Jorge Polanco, who started the ninth with a single, moved up on a passed ball and advanced again on a flyout, crossed the plate as the Twins leaped out of their dugout to circle around Cruz without getting too close. He pantomimed high-fives as water sprayed into the air, and one teammate even squirted a dollop of hand sanitizer onto his batting gloves.

“Boring. It’s no fun. Well, I guess, it is what it is,” Cruz said of the virus-restricted celebration. "Hopefully next year we celebrate the good way.”

The Pirates (2-8), who lost their fifth consecutive game and have the worst record in the major leagues, had a runner on second with two outs in the top of the ninth against Twins closer Taylor Rogers (1-0), but Tucker grounded out. That set up the 40-year-old Cruz for his latest clutch hit for a team he has fast become the leader of less than halfway into his second season in Minnesota.

“I’m pretty happy watching the guys dance around and not touch each other. You’ve got to make it fun no matter what’s going on,” Twins manager Rocco Baldelli said.

Tucker homered on the first pitch of the night while batting leadoff for the first time in his career for the Pirates, who squandered a 4-0 lead.

Derek Holland had a masterful start going for Pittsburgh, with just two singles allowed over the first 18 batters he faced, but Cruz drove in a run with a single and Max Kepler hit a two-out, two-run double to cut the deficit to 4-3.

“I’ve got a pretty good history with the nine guys who are in their lineup over there, and they’re all pretty good professional hitters,” Pirates manager Derek Shelton said.

Miguel Del Pozo relieved Holland and issued three straight walks, allowing Kepler to score the tying run on a wild pitch. Left fielder Bryan Reynolds made a sprawling catch of a sinking line drive by Ehire Adrianza to end the inning with the bases loaded.

Holland matched the longest start for the Pirates this season with 5 2/3 innings, twice each by him and Joe Musgrove. The Pirates are five days into a 17-day stretch without an off day.

Lewis Thorpe, making his first start of the season for the Twins, lasted four innings. He walked four, all in the fourth, when Erik González hit an RBI double for a 3-0 lead. Phillip Evans added an RBI single in the fifth against Jorge Alcala, a run made possible when Josh Bell moved up on a passed ball by catcher Mitch Garver.

Tucker, the team’s first-round pick in 2014, was drafted as a shortstop but has recently converted to right field and now center. Kepler's double was catchable, but Tucker froze at first when the line drive came straight toward him and thus lost a step in his retreat back.

“I trust my athleticism and my ability out there, and I know I can make that play,” he said.

Shelton returned to Minnesota, where he was the bench coach for the last two years, including the 2019 season under rookie manager and close friend Baldelli, but COVID-19 prevention protocols kept the socializing to a minimum. Twins clubhouse staff left him a bottle of high-end rye bourbon for a welcome-back gift.

Pirates: RHP Michael Feliz was moved from the 10-day injured list to the 45-day injured list, with a strained forearm and elbow. RHP Yacksel Rios was added to the roster to fill Feliz's bullpen spot. The Pirates have seven pitchers currently on their injured lists.

Twins: 3B Josh Donaldson (calf tightness) missed his third straight game. ... RHP Jake Odorizzi (upper back tightness) could come off the injured list to join the rotation by this weekend, Baldelli said. ... LHP Rich Hill (shoulder fatigue), limited to one start so far, was placed on the injured list after the game.

Pirates: Musgrove (0-2, 4.76 ERA) will start on Tuesday afternoon. The Pirates didn't score any runs while he was on the mound in either of his first two turns.

Twins: RHP José Berríos (0-1, 7.00 ERA) will pitch the matinee to finish the two-game series, before the teams travel to Pittsburgh for another pair of games.