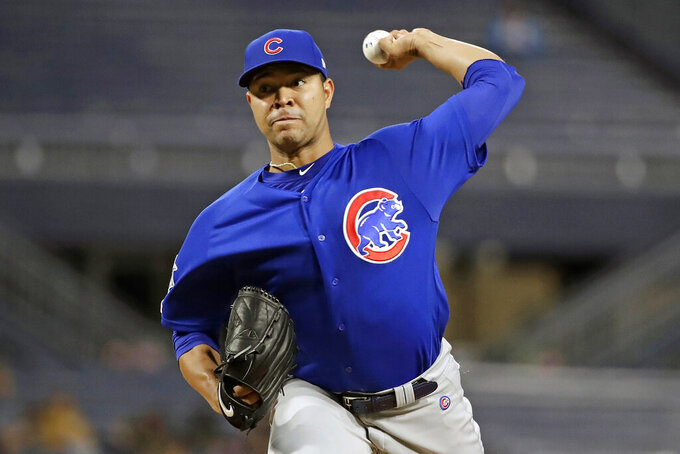 FILE - In this Thursday, Sept. 26, 2019 file photo, Chicago Cubs starting pitcher Jose Quintana delivers during the first inning of the team's baseball game against the Pittsburgh Pirates in Pittsburgh. Chicago Cubs left-hander José Quintana had surgery to repair nerve damage in his pitching thumb Thursday, July 2, 2020 after he cut himself washing dishes and is out indefinitely. (AP Photo/Gene J. Puskar, File)

CHICAGO (AP) — Already concerned about the depth of their rotation, the Chicago Cubs will have to get by for at least a little while without one starter because of a freak injury.

Left-hander José Quintana had surgery to repair nerve damage in his pitching thumb Thursday after he cut himself washing dishes.

Chicago did not have a timetable for his return.

“There's a best-case scenario in which it heals quickly and his thumb feels good and he can resume a pretty rapid ramp up from that point,” president of baseball operations Theo Epstein said. “He's been built up, is pretty far along. But there's certainly another scenario in which the nerve takes longer to heal and is going to be significantly delayed. We really can't forecast it. We just have to wait and see and hope for the best.”

Quintana cut his thumb at his home in Miami on Saturday and needed five stitches, according to the team. The damage to the digital sensory nerve was revealed during an exploratory procedure in Chicago on Thursday and repaired at that time.

The 31-year-old is expected to resume throwing in about two weeks. The Cubs hope to get a better idea then of how much time he will miss in a season that starts July 23 or 24 and has been shortened to 60 games.

Quintana went 13-9 with a 4.68 ERA last year in his second full season with the Cubs. He was an All-Star for the crosstown White Sox in 2016.

Alec Mills could take Quintana's spot in the rotation. The 28-year-old right-hander had a 2.75 ERA in four starts and nine appearances last season. Right-handers Adbert Alzolay and Colin Rea are also in the mix.

“Given the situation that we’re in as an industry starting this season with so much uncertainty surrounding us, it would be foolish for us for everything to go smoothly and to have all our players available to us at all times,” Epstein said. “We didn’t necessarily see this circumstance coming with Q. It’s something you can’t anticipate. We know there are going to be absences that we have to fill, and there’s going to be adversity we’re going to have to overcome.”

The Cubs got a stark reminder of the seriousness of the situation when pitching coach Tommy Hottovy contracted a severe case of the novel coronavirus. The 38-year-old revealed Wednesday he was quarantined for 30 days and still is recovering, two weeks after testing negative.

“I think that what he did in sharing his story so openly and at such an important moment really provided a service for our organization and really for the entire industry by reminding us all how serious this pandemic is,” Epstein said. “Tommy's story illustrates that nobody is immune from the coronavirus and that while people who are young and healthy may do better on a percentage basis overall, it's still quite dangerous and even potentially deadly for people of all ages and even people in perfect health. ... There were times talking to him through the course of this struggle that he sounded like an elderly person fighting for breath."