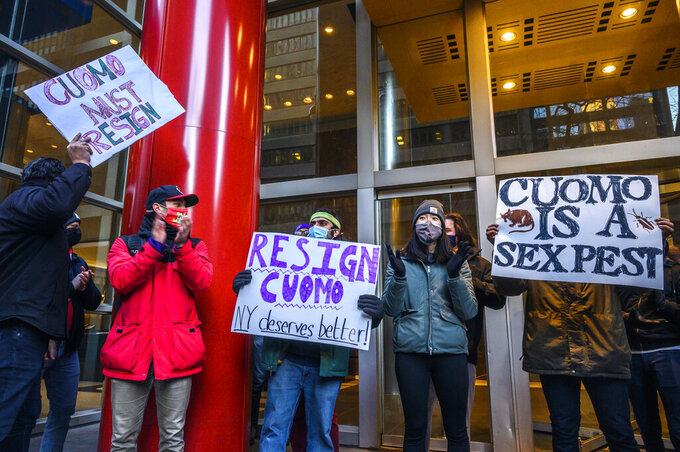 Demonstrators rally for New York Gov. Andrew Cuomo's resignation in front of his Manhattan office in New York, Tuesday, March 2, 2021. Cuomo has avoided public appearances for days as some members of his own party call for him to resign over sexual harassment allegations. (AP Photo/Brittainy Newman)

ALBANY, N.Y. (AP) — New York Gov. Andrew Cuomo has avoided public appearances for days as some members of his own party call for him to resign over sexual harassment allegations.

The governor hasn’t taken questions from reporters since a Feb. 22 briefing, an unusually long gap for a Democrat whose daily, televised updates on the coronavirus pandemic were must-see TV last spring.

He was last before video cameras Thursday, when he introduced President Joe Biden at a virtual meeting of the National Governor’s Association, which he chairs. He also participated Tuesday in the group's conference call, which was off-limits to reporters.

The public absence was more glaring after legislative leaders announced Tuesday they were limiting the governor’s broad powers to unilaterally set state policy during the pandemic.

The governor is also facing criticism for withholding, for months, a full accounting of the number of nursing home residents who died of COVID-19.

Under the bill, Cuomo would still have the power to keep alive his existing COVID-19 rules or tweak them. But he’ll no longer be allowed to make decisions without any input from the Legislature. He’ll have to notify legislative committees and local governments and respond to their questions in certain circumstances.

Neither Cuomo nor his spokespeople have commented on the latest allegation made against him Monday night. A woman told The New York Times that Cuomo touched her lower back, then grabbed her cheeks and asked to kiss her at a September 2019 wedding.

Most leading Democrats have signaled they want to wait for the results of an investigation by New York Attorney General Letitia James into claims that Cuomo sexually harassed at least two women in his administration.

Several members of the National Governors Association said they support the investigation, but didn't say whether they think he should resign as chair. Arkansas Gov. Asa Hutchinson, the association's vice chair, called the allegations against Cuomo “very serious” but said it’s up to Democratic governors to decide who will chair the NGA.

That inquiry has yet to begin. James said her office is working to hire an outside law firm to conduct it.

U.S. Rep. Hakeem Jeffries said New York's congressional delegation in Washington has not met on the issue but “everyone is monitoring the situation closely.”

“Well these are very serious allegations and they require a very serious investigation,” Jeffries told reporters Tuesday. “I’m confident that Attorney General Tish James will get to the bottom of everything, release a report that’s fully transparent and then we can decide the best way to proceed thereafter.”

As of midday Tuesday, at least one Democratic Congress member from Long Island — U.S. Rep. Kathleen Rice — four state senators, several left-leaning Assembly members and the leaders of the progressive Working Families Party said they have already heard enough and that Cuomo should resign. Some suggested he be impeached.

The leaders of the state Assembly and Senate, both controlled by Democrats, hope to vote as early as Friday on the deal to tweak Cuomo's executive powers, which lawmakers granted him last spring.

“I think everyone understands where we were back in March and where we are now," Majority Leader Andrea Stewart-Cousins said, describing the deal as creating “a system with increased input.”

Both the legislature's top leaders, Stewart-Cousins and Assembly Speaker Carl Heastie, have said they support the attorney general's investigation of Cuomo's workplace conduct.

One former aide, Charlotte Bennett, 25, said Cuomo quizzed her about her sex life and asked whether she would be open to a relationship with an older man. Bennett rejected Cuomo’s attempted apology, in which he said he'd been trying to be “playful” and that his jokes had been misinterpreted as flirting.

Another former aide, Lindsey Boylan, said Cuomo commented on her appearance inappropriately, kissed her without her consent at the end of a meeting, and once suggested they play strip poker while aboard his state-owned jet. Cuomo has denied Boylan's allegations.

The woman who spoke to The New York Times about Cuomo's conduct at the wedding, Anna Ruch, hasn’t responded to request for comment from The Associated Press.

Ruch told the newspaper that when she removed Cuomo's hand from her back, he called her “aggressive,” placed his hands on her cheeks and asked if he could kiss her. Cuomo then planted a kiss on her cheek as she turned away.

A photograph taken by a friend captured a look of discomfort on Ruch's face as the governor held her face.

“I felt so uncomfortable and embarrassed when really he is the one who should have been embarrassed," Ruch told newspaper.

New York City Mayor Bill de Blasio, who has had a contentious relationship with Cuomo for years, said Tuesday that if all the allegations against Cuomo are true, "he cannot govern.”

“He would not be able to govern, it’s as simple as that,” the Democrat said.

Asked by a reporter whether Cuomo should resume holding in-person events, de Blasio said, “I think all leaders have to answer tough questions from the media, regardless of whether it’s convenient.”

In a story March 2, 2021, about sexual harassment allegations against New York Gov. Andrew Cuomo, The Associated Press erroneously reported when he had last taken questions from reporters. The story was updated March 3 to report Cuomo did a phone briefing on Feb. 22 where he took questions. Feb. 19, the date used in the story, was the day of his last video briefing.