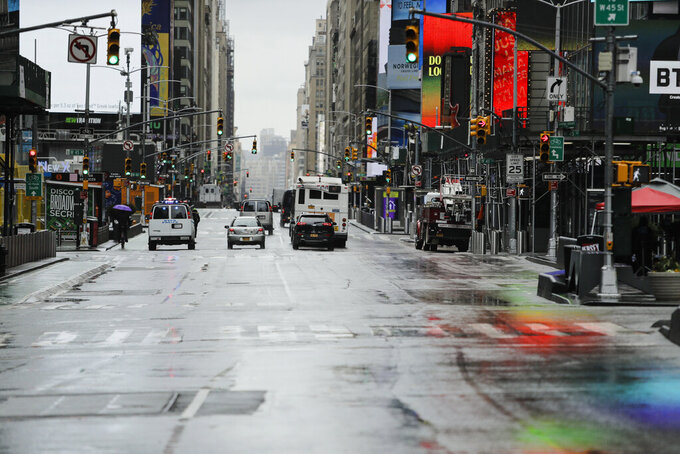 Cars drive down a mostly empty Seventh Avenue during the coronavirus outbreak Friday, April 3, 2020, in New York's Times Square. The new coronavirus causes mild or moderate symptoms for most people, but for some, especially older adults and people with existing health problems, it can cause more severe illness or death. (AP Photo/Frank Franklin II) 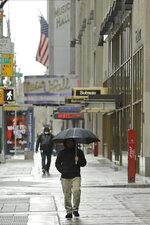 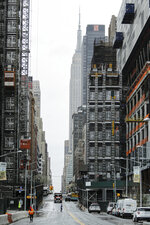 The latest developments in New York:

Cuomo said Friday he will sign an order to redistribute hundreds of ventilators to hospitals overwhelmed with coronavirus patients amid a surge in outbreak-related deaths and hospitalizations.

“You have more deaths, you have more people coming into hospitals than any other night,” a weary sounding Cuomo told a state Capitol news briefing.

As of Friday evening, New York City on its own tallied 1,867 deaths.

New York City hospitals are filling up with COVID-19 patients, and officials fear they will soon run out of breathing machines for intensive care patients. Cuomo said his executive order will allow the state to redeploy excess ventilators and protective equipment from hospitals and other institutions. He said there could be several hundred excess ventilators.

The governor wants upstate hospitals to loan 20% of their unused ventilators to struggling downstate hospitals. National Guard members will pick up ventilators across the state and institutions that give up equipment will get it back or be reimbursed, he said.

The announcement from the Democratic governor quickly exposed geographic tensions within the state. A statement from Reps. Tom Reed, Elise Stefanik and other upstate New York Republicans called it “reckless” and said it “will cost lives.”

“Taking our ventilators by force leaves our people without protection and our hospitals unable to save lives today or respond to a coming surge," Reed and his GOP colleagues said.

In New York City, de Blasio said “this is exactly the kind of thing we need” as the city races to handle a surge in cases.

Though the downstate need is urgent now, supporters of the move noted the outbreak is projected to peak later in other areas of the state.

“We know the door swings both ways — any institution that receives a ventilator will more than reciprocate when the virus peaks elsewhere,” said Kenneth E. Raske, president of The Greater New York Hospital Association, which represents over 160 hospitals and health systems around New York and in other states.

As New York kept sprinting to set up temporary hospitals, the Pentagon said it would change patient screening criteria for the the Navy hospital ship Comfort.

The move came after the federal government agreed Thursday to take coronavirus patients at the Javits Center, a convention facility-turned-hospital that previously was designated only for patients who don’t have the virus that causes COVID-19. Some hospital leaders and New York officials pressed for the change, saying there were few patients who met the original criteria.

The military hasn’t committed to taking coronavirus patients on the Comfort. But now, patients won’t have to test negative for the virus before being transferred to the ship. Instead, there will be pier-side temperature checks and short questionnaires.

That should smooth a procedure that previously involved lengthy questions, multiple conversations and transporting patients to the ship via a city hospital, once taking nearly seven hours in all, said Dr. Steven Corwin, CEO of the private NewYork-Presbyterian hospital system.

“They have streamlined the process. ... It should definitely help,” said Corwin, whose hospital network started Friday with 2,000 coronavirus patients, 550 of them in intensive care. And there were 180 more emergency-room patients needing hospitalization, over four times the normal number, at its hospital in hard-hit Queens.

NewYork-Presbyterian has been adding beds in spots including outpatient procedure suites, a conference area and an athletic bubble by a hospital near Columbia University’s sports facilities. Its has turned operating rooms into intensive-care units and reassigned staffers, with a leading urologist working overnight shifts in an E.R., for example.

“I’m hoping that we can squeak by. I haven’t yet seen the flattening of the curve,” Corwin said, but “there are a lot of really good people working really hard to save lives.”

De Blasio called Friday for a national enlistment program for doctors and nurses to handle an expected surge in coronavirus cases in New York and other places around the country where virus cases are straining existing health care systems.

“Next week in New York City is going to be very tough — next week in New York City and Detroit and New Orleans and a lot of other places,” de Blasio said on MSNBC's “Morning Joe.” “And unless the military is fully mobilized and we create something we’ve never had before, which is some kind of national enlistment of medical personnel moved to the most urgent needs in the country constantly, if we don’t have that we’re going to see hospitals simply unable to handle so many people who could be saved."

The new virus causes mild or moderate symptoms such as fever and cough for most people. For some, especially older adults and people with chronic health problems, it can cause more severe illness and can be fatal.

Funeral homes in New York and around the globe are in crisis as demand surges amid the coronavirus pandemic.

Funeral directors are being squeezed on one side by inundated hospitals trying to offload bodies and on the other by the fact that cemeteries and crematoriums are booked for at least a week.

Pat Marmo's Brooklyn funeral home is equipped to handle 40 to 60 cases at a time. It was taking care of 185 on Thursday morning. “This is a state of emergency,” he said. “We need help.”