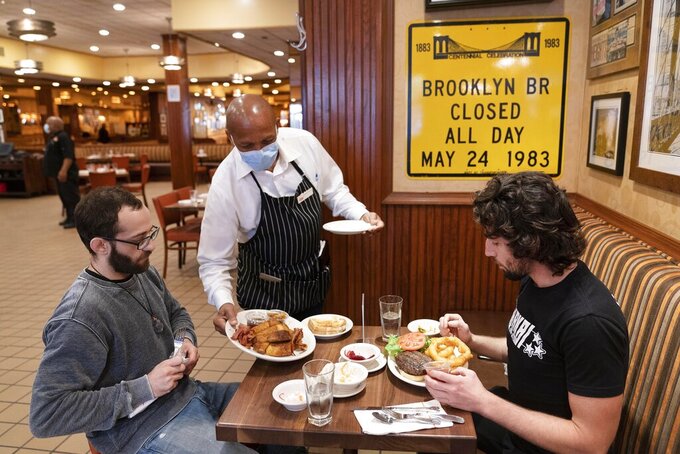 Also on Monday, Cuomo and New York City Mayor Bill de Blasio announced separate plans to help revive the performing arts, a sector that, like restaurants, has been devastated by the coronavirus pandemic.

Cuomo said restaurateurs had asked for the ban on indoor dining to be lifted in advance of Valentine's Day in order to give them a chance to prepare for the day when romantic dinners are traditional.

Indoor restaurant service in New York City has been prohibited since Dec. 14 when COVID-19 cases started surging. The gradual loosening of restrictions comes as the post-holiday-season spike in cases in New York and elsewhere appears to be ebbing.

“On behalf of all restaurants in New York City, we’re thankful that Governor Cuomo has heard our plea to allow restaurants to open for the full Valentine’s Day weekend,” said Melissa Fleischut, president of the New York State Restaurant Association.

Randy Peers, president of the Brooklyn Chamber of Commerce, said Brooklyn restaurants “are surviving by a thread, and with COVID-19 cases and hospitalizations declining across the city, we’re supporting Governor Cuomo’s decision to move up the safe reopening of highly regulated, 25% occupancy indoor dining to Friday before Valentine’s Day.”

They can charge for tickets as long as they don’t block passers-by from seeing what they can.

“If we’re really going to bring back the heart and soul of New York City, we need our arts and culture back,” the mayor said at a news conference enlivened by a performance by members of Elisa Monte Dance, a modern dance company based in Harlem.

Broadway theaters and other indoor performing arts venues have been closed since last March, dealing a heavy blow to New York's famed arts scene. Even large outdoor concert series and the popular Shakespeare in the Park shows were canceled last summer.