Curry, Warriors look forward to another chance next season 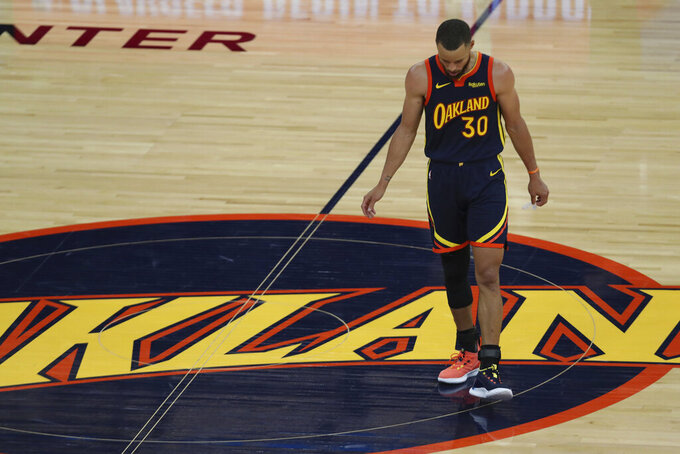 Golden State Warriors' Stephen Curry looks down at the court during the second half of an NBA basketball Western Conference play-in game against Memphis Grizzlies in San Francisco, Friday, May 21, 2021. (AP Photo/Jed Jacobsohn) 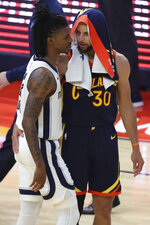 SAN FRANCISCO (AP) — All along, Stephen Curry just wanted to play for something at the end after everybody counted out his Golden State Warriors from the beginning.

He could only be proud when this group fell just short of the goal, appreciating how sick and saddened his teammates felt when they didn't get it done.

The Warriors were eliminated from playoff contention with a 117-112 overtime loss to Memphis on Friday night in the second play-in game. That after losing a 103-100 heartbreaker to LeBron James and the Lakers two days earlier in Los Angeles.

“I would love a playoff experience and seven-game series and see how we respond to that challenge. We have two — I call it three playoff games, the last game of the season and these last two play-in situations,” Curry said. "But it’s not how it’s drawn up in terms of the format, and now we have three months to rejuvenate, retool, come back next season, whatever that means.

“These last three games, including the homestand, I call it nine games, or eight games, have been pretty awesome in terms of the sense of urgency and us understanding who we are.”

The Warriors wound up 39-33, playing much of the last stretch with an eight-man rotation because of injuries.

All those months ago, the doubters never figured Golden State would be competing for a playoff berth at all — not after Klay Thompson went down with a second season-ending injury in as many years.

Curry called the ending “weird” given how the Warriors dominated during a recent five-year stretch.

“I'm proud of every single person in an Oakland uniform tonight and all season,” Curry said. “From 15 wins last year, injuries and all that to what we made out of this year, pretty damn impressive. It's a very tough way to go out and we would love to be playing on Sunday, but we can't lose sight of the big picture in terms of where people had us at the beginning of the season, what we were dealt with injuries, youth, inexperience, lineup changes all year."

Here are some things to take from Golden State's season:

Everybody wanted to see Curry on the big playoff stage after he, at 33, became the oldest scoring champion since Michael Jordan at 35 in 1998.

Curry, Green and Kevon Looney are accustomed to long postesason runs, like the five straight NBA Finals trips that ended with a six-game loss to Toronto two years ago.

So there's a hollow feeling with this finish, to be sure.

“We’ve got a lot more hell to cause, a lot. Looking forward to it," Green said of teaming with two-time MVP Curry.

Second-year pro Jordan Poole spent a stint in the G League bubble, then delivered time and again down the stretch once promoted to the Warriors.

He hit a go-ahead 3-pointer with 1:50 left in OT for Golden State, only to see Xavier Tillman answer with a baseline 3 moments later. Poole lost the ball out of bounds leading to Ja Morant’s basket with four seconds left, then Poole made another improbable 3 with two seconds remaining.

“Just really fun to see how far Jordan has come since his rookie year. A season ago, he was lost. He was lost in the woods like most rookies are, and it’s just confirmation that hard work and perseverance pays off,” Kerr said. “Jordan was in the gym more than any other player during the pandemic, and he’s earned this. So thrilled for him. I think he’s got a really bright future, and obviously will play a big role for us going forward.”

Juan Toscano-Anderson's new multiyear contract last week is a bright spot and success story everybody could cheer. The former two-way forward grew up in East Oakland cheering for the Warriors and kept believing he could stay in the NBA.

The Warriors needed his energy off the bench along with all the reserves.

“We just wanted to attack every night,” Kent Bazemore said. “That’s the culprit of it, you have those kind of guys in the locker room, back against the wall, you know, Juan Toscano-Anderson, just a dog, Jordan Poole. I mean, the young guys really stepped up, Mychal Mulder here late.”

Thompson could only watch with desperation, wishing he could help. Curry's Splash Brother missed a second straight season because of a season-ending injury, this time a torn right Achilles tendon that required surgery.

He sat out the 2019-20 season after tearing the ACL in his left knee in Game 6 of the finals against the Raptors and needing surgery.

“He’s going to do everything in his power to get back to 100 percent, knowing what he’s been through the last two years,” Curry said. “There’s going to be a lot of support around to help him get there but whatever version of him comes back is definitely a boost. We’ll patiently wait for what that looks like.”

Golden State regularly played with an eight-man rotation down the stretch, given Damion Lee was sidelined by COVID-19 despite being vaccinated, and Kelly Oubre Jr.'s wrist injury kept him out for the final 12 games.

“We kept fighting,” Andrew Wiggins said. “We didn’t give up, we stayed competitive and playing hard and we only got better.”