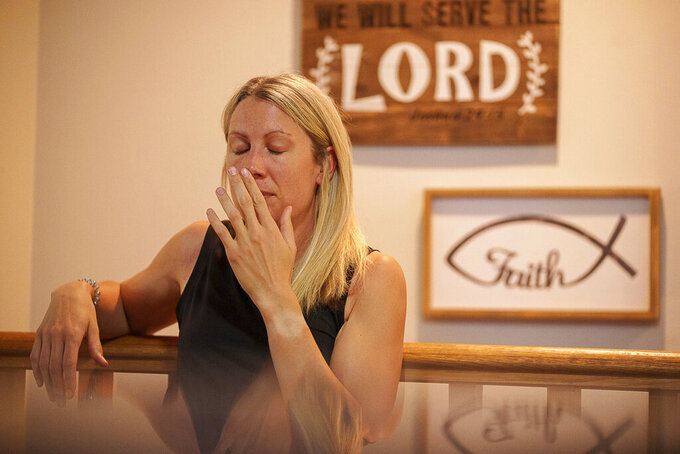 Alexis Hilbelink, at her home in Salt Lake City on Thursday, May 20, 2021. Salt Lake County District Attorney Sim Gill announced Thursday that a Unified police officer was legally justified in shooting Alexis's husband, Matthew Hilbelink, who was suicidal and who had pointed a gun at an officer. (Trent Nelson/The Salt Lake Tribune via AP)

SALT LAKE CITY (AP) — She called the police on an August afternoon last year after her husband sent her a text saying he bought a gun and wanted to end his life.

It never occurred to Alexis Hilbelink that the police might shoot her husband, Matthew, when they found him sitting cross-legged in an empty parking lot with a gun in his hand.

“I just hoped they would talk to him,” she recalled Thursday to the Salt Lake Tribune. “Like they would help him. Because I knew he would not have shot himself or anybody. I thought they could just help him. I didn’t think it would be this stand-off situation.”

But that’s what happened.

Officers surrounded Matthew Hilbelink. They tried to talk to him, to plead with him to put the gun down — but Hilbelink didn’t respond. He had his finger on the trigger, according to the Salt Lake County District Attorney’s Office, and at times pointed the gun in an officer’s direction or at himself.

The last time he pointed the gun toward an officer, Unified Police Officer Dave Jaroscak fired, striking Hilbelink in the head. He died in a hospital three days later.

“When they told me they had shot him, I was like, ‘What do you mean?’” Alexis Hilbelink said. “It made no sense to me. Why would they do that? He wasn’t going to do anything to anybody.”

Salt Lake County District Attorney Sim Gill announced Thursday that Jaroscak was justified in killing Hilbelink, saying it was reasonable that the officer feared for the safety of a colleague.

But Gill questioned whether the shooting was necessary.

The outcome of similar situations could be different going forward — after Utah lawmakers passed a bill clarifying that police officers shouldn’t shoot at people who are only a threat to themselves.

Hilbelink’s family hopes the new law will save lives. His brother, Stephan Hilbelink, said they felt Gill’s ruling was “fair and correct according to the law the day of my brother’s shooting.”

“My hope and prayer is that (the new law) will be used correctly, wisely and to its fullest extent,” he said, “so families can have another day to help, love and support their loved ones with mental illness.”

Alexis Hilbelink said her husband had depression, which had deepened during the pandemic because group therapy and other support had been canceled or was done online.

She was shocked when he texted her on Aug. 8 saying he had just bought a firearm. She didn’t know you could get a gun that quickly.

“My husband has a gun and he said he’s going to commit suicide,” she told a dispatcher. “And now he’s not at my house and I don’t know what to do. I’m at work.”

Officers were able to find Hilbelink, 39, in the parking lot near 3210 E. 6200 South in Holladay after his wife used an app to track his iPhone, according to Gill’s ruling.

When they arrived, three officers took cover behind a truck, according to Gill, and began talking to Hilbelink. Two had guns, and a third had a “less-lethal soft-foam projectile weapon.”

They tried to negotiate with Hilbelink for nearly 30 minutes.

“We learned that he liked hiking,” one officer later told investigators. “So, I tried to kind of start talking about ‘What hobbies do you like?’ Things of that nature. Talked about hiking and how we just went hiking, my wife and I. I talked about PTSD and how things could still be OK, just let us get the chance. ... He just wouldn’t take it. And he just kept looking at us like he was ... kind of that zombie kind of look. There was no one home, it seemed like. Like a man totally lost.”

Gill’s ruling said the officers kept talking to Hilbelink, but he never responded. He kept the gun in his hand, and at times pointed it at the officers and at himself.

A sergeant later told investigators he considered firing one of the foam bullets, but worried it would just agitate Hilbelink and cause him to shoot.

“At that point, I was going through in my mind, ‘Should I shoot him in the hand (with the less-lethal weapon), maybe break his hand so he can’t pull the trigger?” the sergeant recalled. “We’re not trained that way.”

Officers told investigators that, at some point, they saw Hilbelink’s expression change and he had what one officer described as a “thousand-yard stare.”

Jaroscak said in a statement that Hilbelink “then began to raise the gun from his thigh, and it appeared he was aiming at (another officer’s) exposed upper body, face and head. I believed that Hilbelink was about to shoot (the officer) if immediate action wasn’t taken. To protect (the officer), I shot Hilbelink.”

Gill wrote that it was reasonable for Jaroscak to believe that the other officer’s life was in danger. But the district attorney said even though the case was justified, he’s “troubled with the outcome in which a suicidal man with a gun is shot and killed by police.”

Gill said he questions if there was a better way for police to have responded. What was the training offered to the officers to deal with a suicidal man with a gun? Could a negotiator have been more readily available? Was there a better place to park the police truck to talk to Hilbelink? What’s the best way to protect the community while trying to contain the threat that Hilbelink posed?

“Could this have ended differently?” he said. “The answer to this ultimate question, and the answers to other more specific questions related to this encounter, may alter the course of future police encounters with similar circumstances.”

Alexis Hilbelink wasn’t prepared for the onslaught of mental health issues her family would experience in the wake of her husband’s death.

But when it came clear she needed outside help, she said she couldn’t find it. She thought as a nurse working at a cancer institute, she would have the resources. Maybe those resources were affected by the COVID-19 pandemic, she said, but it wasn’t there when they needed it.

Alexis Hilbelink recalled once calling a hospital mobile crisis outreach team for one of her children, but the wait was two hours. She had no other choice but to call the police.

Officers with the same department who killed her husband showed up at her door.

The Holladay woman hopes that through the recent law change, no other family will go through what her family has.

Police officers in Utah are now prohibited from shooting at someone if the person is suicidal but isn’t a threat to anyone else.

The state law previously said a police officer was allowed to use deadly force if a suspect poses “a threat of serious bodily injury to the officer or to others.”

It’s expected that the new law will alter how police are trained, and allow them to retreat in situations where they are responding to a suicidal person who isn’t threatening anyone else.

“When someone is experiencing a mental health crisis, when we call our police officers, we hope for help,” she said. “Not for them to shoot somebody. Hopefully, if a situation like this happens again, it gives me a little bit of comfort that maybe they’ll just back off.”