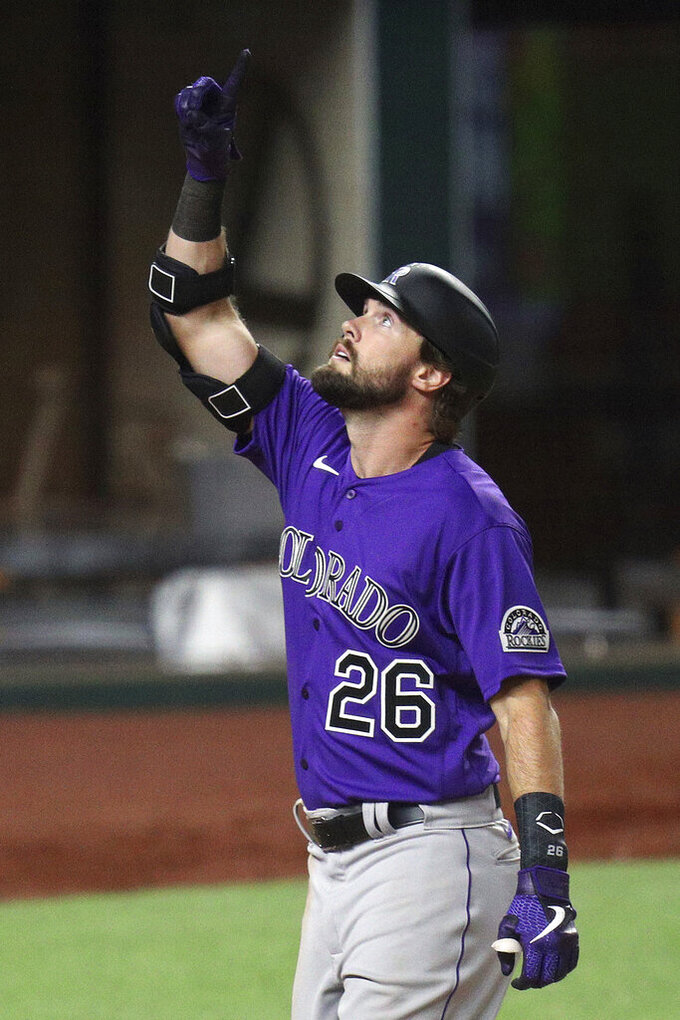 Colorado Rockies outfield David Dahl announced on social media Thursday that he and his wife are expecting a baby in January. That news, coupled with being considered high risk with his health, caused him to give serious consideration to whether he would to play this season in light of COVID-19 concerns.

On deck for Friday: Soon-to-be-dad Dahl.

He's expected to be batting lead-off and playing in center field for the opener in Texas against the Rangers.

“I wanted to see how the protocols and everything played out in summer camp,” Dahl said of his decision process in a Zoom call. “Me being high risk and with my wife, Jacquelyn, being pregnant, I wanted to make sure we’re taking care of being safe. So far, so good. Testing is going well.

“We’ve all been tested a good bit,” Dahl added. “We’re spaced out on the plane. We wear masks. I’m confident in all the protocols."

It’s been an injury-filled baseball journey for the 26-year-old Dahl, who had surgery to remove his spleen in 2015 following an outfield collision in a minor league game.

Last season, the All-Star outfielder missed time when his right ankle got stuck in the turf as he attempted to field a sinking liner at Coors Field. He didn't play after Aug. 2. He hit .302 with 15 homers in 100 games.

Dahl also sat out two months in ’18 for a broken right foot and didn’t play in the majors in 2017 because of a stress reaction in his rib cage.

That's why when he felt a recent twinge in his oblique area, he took it seriously. He shut down his swing in order to rest — just to be safe.

He showed off his power Tuesday by lining a homer to right field at the Rangers' new $1.2 billion stadium.

“Body feels good. Swing feels good,” Dahl said. “I think this lineup can be really, really dangerous. We have some guys with pop. We can put up some runs."

NOTES: Colorado selected the contracts of catchers Drew Butera and Elias Díaz to the 40-man roster. The Rockies also recalled RHP Ashton Goudeau from their alternate training site. ... OF Charlie Blackmon was reinstated from the injured list. He tested positive for COVID-19 in late June. He returned to the Rockies for his first workout on July 13. ... Catcher Dom Nuñez and INF Brendan Rodgers were optioned to the team’s alternate training site. ... Colorado announced RHP Peter Lambert underwent Tommy John surgery earlier this week.