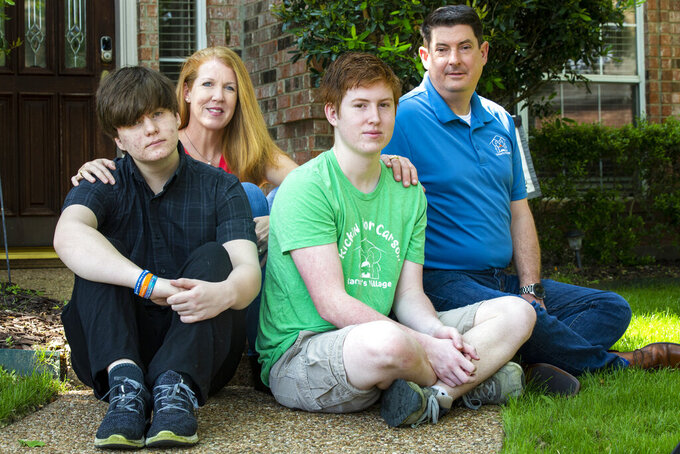 Jason Dyke, right, and his wife, April, second from left, pose for a portrait with their sons Ryan and Alex at their home in Coppell, Texas, Tuesday, April 21, 2020. Another son, Carson, died by suicide at age 11 three years ago, and Jason Dyke has since created Carson's Village — a nonprofit aiming to help families navigate the grief and loss of loved ones with resources and advice. The coronavirus pandemic has complicated that work, but it has also led to new ways to help families of COVID-19 victims or those who have died from other causes during this difficult time. (Lynda M. Gonzalez/The Dallas Morning News via AP)

DALLAS (AP) — Even now, on the third anniversary of his 11-year-old son’s death by suicide, Jason Dyke still braces himself for the inevitable question: Would you tell me what you missed with Carson so I won’t miss it in my own child?

There’s no changing that reality — any more than changing the fact that Jason and April still miss their youngest son every single day as deeply as they did when he died April 28, 2017.

Carson’s parents don’t know the answer to “why?” Despite retracing their son’s life path again and again, they find no subtle clues or warning signs.

But what Jason did discover after Carson’s death was a profound way he could help other grieving families. He created Carson’s Village to provide free, comprehensive help — including calls to funeral homes, price negotiations, celebration-of-life logistics and mental health resources — to people in the aftermath of any type of death.

There’s nothing warm and fuzzy about the practical details of death, which probably is a big reason why Carson’s Village is one-of-a-kind in the nonprofit world. And why, as the coronavirus pandemic shakes the long-held traditions around death and mourning, Jason’s work is more important than ever.

Carson’s Village is fielding calls, from as far away as New York to here in North Texas, from families who have lost loved ones to COVID-19 as well as to other causes. Callers still need help with the basics but they also have questions about navigating death — and celebrations of life — amid mandatory shelter-in-place orders.

“You can’t get together,” Jason told the Dallas Morning News. “You can’t hug somebody. You can’t tell stories about the person. You can’t get that closure.” For now, he advises families on streaming funerals online, designating shifts for visitation and grief counseling for isolated loved ones.

Today’s pandemic also reverberates with the same kind of grievous assumptions and misperceptions that Jason saw after Carson’s death by suicide.

In both cases, he said, people want black-and-white answers, but much about coronavirus deaths — just like those caused by suicide — remains a mystery.

Just as people can feel shame around suicide, Jason said, “people feel that around COVID. Will I be looked down on? Will I be perceived as not having been careful or possibly giving it to my neighbors?”

After young Carson’s death, his family didn’t want to hide anything. Running the nonprofit gives Jason strength, hope and purpose after the shocking death of his very special red-headed boy.

Carson Dyke was the youngster you could always count on to put others first and spark a smile in anyone in the room. April and Carson did everything together: “We cooked together. We went on errands together. We shopped together. We watched TV together.”

“He had a great heart,” Jason added as the couple recalled instances of their son asking a newcomer to sit with him at lunch or partnering with a special education student for a classroom project.

Carson was very smart, and his report cards reflected near-perfect grades. He worked hard at it and put a lot of pressure on himself. He had a checklist for everything.

But he also was just a child — a sixth-grader who loved Legos, video games with friends and joking around.

April and Jason laughed now and then as they shared these stories, only for their voices to break as they came back into the present.

The day Carson died seemed like most any other Friday for the Dyke family. The oldest of the three boys, Alex, was at a softball game, and when Jason, April and middle son Ryan went to visit neighbors, Carson chose to stay home.

When the family returned to pick up their youngest for dinner, Jason found Carson’s body.

“We would never have thought this would happen in a million years, but it did,” Jason said,

April, who works in Coppell ISD as a secondary specialist for special education, said her grief still comes in waves, but at least the waves are a little farther apart.

“But it’s not going to go away,” she said. “This will always be part of who we are now.”

While April has coped by staying very busy with family, job and friends — and allowing herself to “be OK with not being OK some days” — Jason has thrown himself into Carson’s Village.

Jason still vividly recalls how, once the hospital confirmed Carson’s death by suicide that awful Friday night, he had no idea what to do next. But he and April, both Texas A&M grads, had a huge village of friends, most of them fellow Aggies, to carry them through the next days and weeks.

Bartkowski remembers it like this: “I just said no, we’re not spending more money on flowers, that doesn’t mean anything. You know what we can do, we can put an A&M flag on Carson’s casket and that will mean more than anything else.

“And it absolutely did in the end.”

Even in the heavy fog of grief, Jason recalled asking himself, “What if we didn’t have these friends? What happens to people who don’t — and don’t know what to do?”

He created Carson’s Village to answer that question. He might not ever understand his own son’s death, but he could ease the suffering of others in the immediate aftermath of their own losses.

Part of AT&T’s Internet of Things team, Jason is geared toward business and strategic thinking — not social work or grief counseling.

“All I knew in the beginning was I wanted to hold the hand of a family and help them as best I could,” he said.

His nonprofit is a one-stop clearinghouse for post-death information and planning. Sometimes the calls to Carson’s Village involve a sudden or unexpected death; other times, even after a hospice stay, the loved one’s family is still unprepared.

The nonprofit does not help pay for funerals, yet among its most important work is negotiating with funeral homes to make sure they match the emotional and financial needs of the often low-income families. Hospitals, police departments and religious groups across North Texas — and in some cases across the country — regularly make referrals to Carson’s Village.

Since January 2018, Carson’s Village has served 368 families in 29 states. Jason handled the first 200 mostly on his own, but about a year ago, he hired the first of two staffers to help support the families and find resources.

A big part of what Jason calls his “village work” involves connecting people who have suffered similar losses — for instance, linking the mother of a Houston 12-year-old who died by suicide with another mother who had suffered a similar loss.

Bartkowski, who is CEO of Girl Scouts of Northeast Texas and on the Carson’s Village board, was part of the earliest conversations about creating the nonprofit. “We found a gap in services that was so big that it was one of those ‘duh’ ideas,” she said.

“Nobody wants to need Carson’s Village,” Bartkowski said. “Yet 100% of people are going to suffer from the loss of a loved one.”

The pleas for help often sound like this: A family member is frantic because the hospital or medical examiner wants to know where to move a deceased loved one. Jason’s first response: Don’t release the body to anyone without a plan. Take a breath and give me 30 minutes to come up with your best options.

Jason recalled one call from a 19-year-old who lived with his mom and was frantic in the hours after she passed away from cancer. April got on the line because the teen said he was more comfortable talking to a woman.

“He didn’t have anyone else to talk to,” Jason said. “He was just so paralyzed that he didn’t know his options and couldn’t make decisions.”

After finishing making calls about cremation services in San Antonio, Jason said the cost should be $700 or $800, but the first couple of places he checked with quoted much higher prices.

“The family wouldn’t know that was too much,” he said. “They would have called the place that was closest to them and put $2,800 on their credit card.” Instead, Jason found them a quality choice at a price that worked.

Each time he hears the stress lessen in the voices of bereaved family members as he offers invaluable help, Jason said he feels his own pain ease — if only in the moment.

“I can make a huge difference in people’s lives,” he said. “And I don’t have to bury Carson. … I can keep him alive, relevant and a part of the world."