Dallas Seavey wins Iditarod, matches most wins by a musher 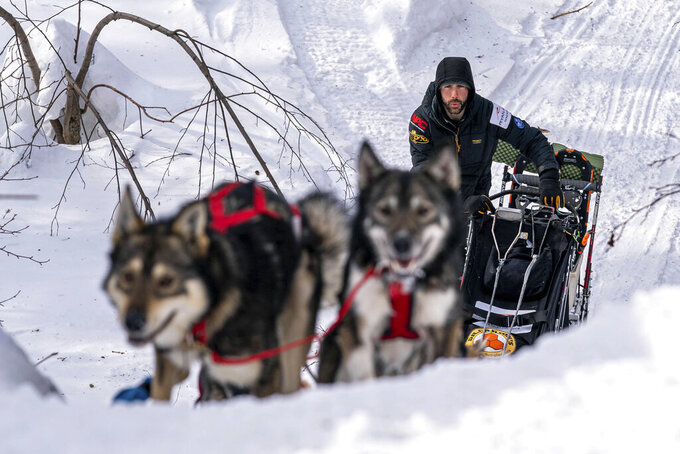 Richie Diehl mushes up the first part of the Happy River Steps on Sunday, March 14, 2021 during the Iditarod, in Alaska. The steps are normally a tricky downhill part of the race, but this year mushers are also doing it in reverse. (Loren Holmes/Anchorage Daily News via AP, Pool) 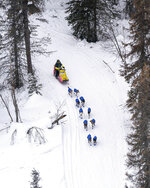 ANCHORAGE, Alaska (AP) — Ever since Dallas Seavey became the youngest musher to win the Iditarod Trail Sled Dog Race in 2012, he’s been bombarded by questions on whether he would eventually get five race titles, the most ever by a musher.

“I think it was probably 10 minutes after I won that first race that somebody mentioned five,” he told The Associated Press before this year’s race. “At that point, I said I got to worry about No. 2 first. I may be homeschooled, but I know that much, two comes after one.”

Now Seavey, a 34-year-old considered by many to have the potential to become the race’s great champion, will have to start fending off questions about No. 6. Seavey on Monday collected his fifth Iditarod title, winning the pandemic-shortened race by more than three hours over second-place musher Aaron Burmeister.

He matched the record of five wins by Rick Swenson, known as the King of the Iditarod for picking up those titles from 1977-91.

“It’s a big deal,” Seavey said at the finish line after a race official checked to make sure his sled was complete with a sleeping bag, axe, dog booties and other mandatory gear. His 5 a.m. finish was televised statewide.

Seavey said he didn’t allow himself to think about a fifth win on the trail because he didn’t want to jinx it.

“That’s huge, man,” he said. “I looked up to the Iditarod champions my whole life and I’ve dreamed about this my whole life. And now to actually go from that, to see it happen, to realize that, that’s pretty cool.”

Numerous mushers have tried to crack the five-title barrier over the past three decades only to fall short. Four-time champions and familiar names to fans are the late Susan Butcher, Martin Buser, Lance Mackey, Doug Swingley and Jeff King.

Seavey said the goal has been to get the fifth title, which puts a musher in a pretty elite group, but he’s also realistic about what it means.

“I don’t hold any misconceptions that this would somehow change me,” he said before the race. “We see that in sports quite a lot where we focus so much on one thing and the assumption that it is if you win, this is somehow miraculously going to solve all your other problems. That’s not the case.”

Seavey said at the finish line he tries to give himself a little time after each win to revel in it, but then it’s time to focus on the next thing, whatever it is.

“Whatever you’re doing, give it your whole attention and we’ll dwell on the records or the numbers when we’re too old to keep doing it. That’s the time to look back at it,” he said. “But right now, I want to keep moving.”

The victory also marks Seavey’s return to the race that has been a part of his family’s history since the start. His grandfather, Dan Seavey, placed third in the first Iditarod in 1973.

Seavey vehemently denied giving his dogs any painkillers. A year later, the Iditarod reversed course and cleared Seavey of any wrongdoing. But he skipped the Iditarod until this year, choosing to compete with his dogs in Europe instead.

He said he holds no animosity toward the Iditarod and said the entire Seavey family loves the race and what it means to Alaska. “I think things are all good with the Iditarod right now,” he said.

The pandemic didn’t stop the Iditarod from starting March 7 with 46 mushers. During the race, mushers have bypassed most rural Alaska villages that normally serve as checkpoints as a safety precaution, leaving the competitors to sleep in tent camps outside towns or under the stars in temperatures that have reached minus 55 degrees (minus 48 C).

Since then, nine have scratched including fan favorite Aliy Zirkle, who was injured in a fall in what she has said would be her last race. Another musher, Gunnar Johnson, was withdrawn after he tested positive for COVID-19. That left 36 teams on the trail.

The race route was changed and shortened this year. Mushers started the race near Willow, about 50 miles (80 kilometers) north of Anchorage. From there, they traveled to the ghost town of Iditarod and then turned back around to finish in Willow.

Though the race was shortened, Seavey said he doesn’t think there should be an asterisk beside his name as the 2021 champion because the trail is different every year.

Seavey has started the race from the Anchorage area, from Fairbanks when there wasn’t enough snow further south, and he’s done the race’s northern and southern routes.

“When you beat everybody that shows up, you win on the trail they give you,” Seavey said.

Defending champion Thomas Waerner didn’t race this year because of uncertainty in arranging travel during the pandemic. He was stuck in Alaska for months after winning last year, and only got home to Norway after hitching a ride on a vintage airplane flying from Anchorage to its new home at a museum in Norway.

Partly due to the pandemic and pressure on sponsors by race critic People for the Ethical Treatment of Animals, the overall race purse was down 20%, to $400,000 this year. Seavey received $40,000 and a new snowmobile for winning the race, a prize that was about $10,000 less than what Waerner received last year.