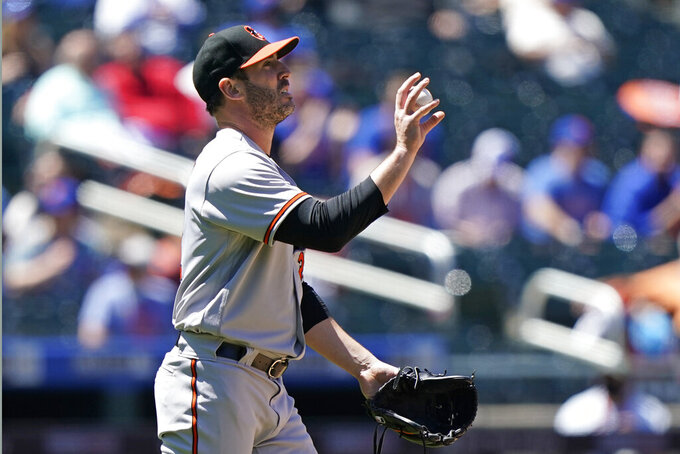 Baltimore Orioles starting pitcher Matt Harvey (32) reacts shortly before being taken out of the game during the fifth inning of a baseball game against the New York Mets, Wednesday, May 12, 2021, in New York. (AP Photo/Kathy Willens)

NEW YORK (AP) — Matt Harvey walked onto the Citi Field mound for the first time in 3 years, 9 days, his brown eyes darting around the stadium where he became a star and left in ignominy.

“There’s been so many ups and downs here at this ballpark and with this organization that I didn’t really know what to expect,” he said later. “What the fans gave me out there was pretty incredible. I was holding back tears.”

Harvey received three standing ovations, but his outing for Baltimore was no better than his final performances for New York. Pitching against against the Mets for the first time, Harvey allowed Kevin Pillar’s two-run triple in a three-run second inning that carried New York over the Orioles 7-1 on Wednesday for a seven-game winning streak.

Wearing orange and black instead of blue and orange, Harvey (3-3) gave up a season-high seven runs and eight hits in 4 1/3 innings with one walk and four strikeouts. His ERA rose from 3.60 to 4.81 as the last-place Orioles lost for the fifth time in six games.

“I wish things went differently," he said. "I wish the score was flip-flopped.”

Taijuan Walker (3-1) lowered his ERA to 2.20, allowing one run and four hits over seven innings as part of a five-hitter.

Dominic Smith had three hits and two RBIs for the NL East-leading Mets, who completed a two-game sweep that finished a 5-0 homestand. New York is on its longest hot streak since winning eight straight from Aug. 3-10, 2019.

Nicknamed the Dark Knight of Gotham and a star of the team that reached the 2015 World Series, Harvey was dealt three seasons ago after pitching poorly and with management peeved as nightlife column mentions approached the frequency of his sports section headlines.

Harvey said he would have understood boos. Instead, he received his first ovation from the pandemic-limited crowd of 8,035 when he warmed up for the first, prompting the 32-year-old right-hander to wave twice with his glove and tip his cap.

“I’d like to say I gave everything I had here. Especially in that 2015 run, it was really something special, and I left it all out there for everybody, for the fans, for our teammates,” Harvey said. “Those memories definitely came in when I got some cheers and got the standing ovation.”

Fans paid tribute again with extended applause when he batted in the second.

“That was a class move on their part," Orioles manager Brandon Hyde said.

Harvey was awarded a final ovation when heading to the dugout with head bowed after he was pulled in the fifth.

“Obviously the last couple years weren't the way I want them to go, between the injuries and I think me getting in my own way and causing some of those problems,” he said. “I feel for the fans that maybe I let them down."

His cockiness has changed to contemplation and perhaps contrition.

“The last couple of years, especially here, have been extremely humbling,” he said. “I’ve learned from my mistakes and finally being healthy and trying to kind of reinvent myself and get back out there hasn’t been easy.”

On the mound where Harvey pitched one-hit ball for nine nearly perfect innings against the Chicago White Sox in 2013, he fell behind when Pete Alonso doubled on 95.1 mph pitch, Smith singled and Pillar tripled off the left-center field wall. José Peraza followed with a single for his first Mets RBI and a 3-0 lead.

Run-scoring singles by Smith in the third and Michael Conforto in the fifth made it 5-0. Shawn Armstrong relieved with two on and allowed Smith’s RBI double and Peraza’s run-scoring single.

Harvey had last pitched at Citi Field on May 3, 2018, allowing five runs in two innings of relief in an 11-0 loss to Atlanta. He was dropped from the roster the next day and traded to Cincinnati on May 8 for catcher Devin Mesoraco.

Viewed as a successor to Tom Seaver and Dwight Gooden, Harvey started the 2013 All-Star Game at Citi Field and memorably talked manager Terry Collins into letting him go out for the ninth inning of World Series Game 5 with a 2-0 lead against Kansas City in 2015. The Royals tied the score off Harvey and Jeurys Familia, then went on to win in extra innings for the title.

Harvey was 25-18 with the Mets from 2012-15, then went 9-19 with a 3.66 ERA from 2015-18 for a 34-37 record during a tenure interrupted by Tommy John surgery and an operation to correct thoracic outlet syndrome. He has been a vagabond since, pitching for the Reds, Los Angeles Angels (2019), Oakland's Triple-A affiliate (2019) and Kansas City (2020). He signed a minor league contract with the Orioles in February and gained a $1 million salary when put on the big league roster.

“Besides today, I think things have been going in the right direction,” he said. “So I’m not going to beat myself up about a bad outing. But, obviously, I wish it was different.”

Conforto made a sprawling backhand grab in right to rob Austin Hays in the third, a play reminiscent of Ron Swoboda’s catch against the Orioles’ Brooks Robinson in Game 4 of the 1969 World Series.

Baltimore said it reached 85% vaccination for tier 1 and 2 personnel, allowing the Orioles to relax MLB’s coronavirus protocols, such as jettisoning masks in dugouts and bullpens and eliminating some movement restrictions on trips. “Very proud as an organization,” Hyde said.

Mets: CF Albert Almora Jr. was put on the 10-day IL with a bruised left shoulder, a day after crashing into wall trying to catch Hays’ fly. ... OF Khalil Lee was recalled from Triple-A Syracuse.

Orioles: A pitcher for Friday’s homestand opener against the Yankees has not been announced.