Darren Criss reveals songwriting chops and a goofier side 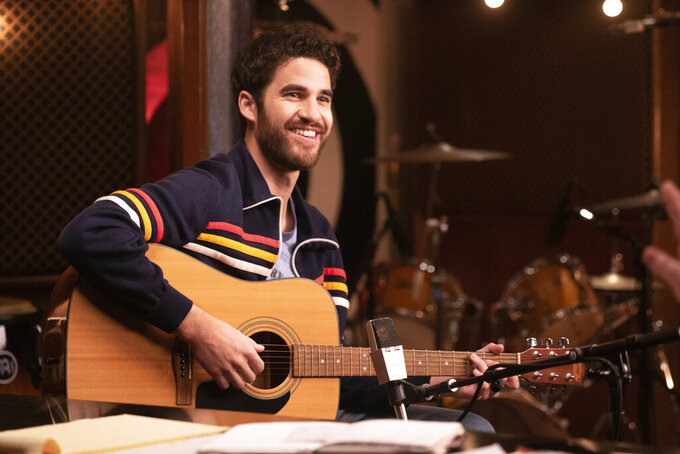 This image released by Quibi shows Darren Criss in a scene from Quibi's new 12-part series “Royalties." The satirical look at music industry has a fresh song in every episode and allows Criss to show off more than his acting chops: He wrote all the music, from a raunchy rap song to pure, irresistible pop. (Kevin Estrada/Quibi via AP)

NEW YORK (AP) — Great songs have been inspired by all kinds of things — like love, dreams and heartache. Now comes an unlikely one inspired by a hot dog.

That's the comedic premise of the first episode of Quibi's new 12-part series “Royalties,” starring Darren Criss and Kether Donohue as an aspiring songwriter team. One day, the hungry duo find creativity while munching on frankfurters.

“I was playing ketchup," the lyrics go to their subsequent soaring ballad. "It was more than I could chew/But you put me on a roll/Turned me into a frank man.”

The satirical look at the music industry has a fresh song in every episode and allows Criss to show off more than his acting chops: He wrote all the music, from a raunchy rap song to pure, irresistible pop.

“Songwriting and music has always been such a huge part of my life that gives me such a great deal of joy. That has just had nowhere near the amount of exposure as my acting career,” said the Emmy and Golden Globe Award-winner. “And so I'm trying to level the playing field a little bit.”

The show reunites Criss with the writing team of brothers Matt and Nick Lang, who all collaborated over a decade ago on the cult comedy “A Very Potter Musical.” They've been mixing comedy and music ever since.

“Going into a really zany, goofy comedy is what I was doing with the Langs before my Hollywood train got running,” said Criss. “So getting to go back to that — being a goofball, writing goofy songs, doing stuff that isn’t really totally serious — it is my wheelhouse.”

The show begins airing Monday and explores how songs from superstars are often crafted by unknown songwriters, something Criss has long been obsessed with. As a kid, he studied the liner notes of albums to find out who the overlooked writers were. “While this show is about songwriters, it really is an ode to the creative process in general,” he said.

The show's creators cleverly made the show work on Quibi, the mobile phone-only platform that offers installments of movies and TV in 10 minutes or less. Other celebs on the platform include Chance the Rapper, Chrissy Teigen and Jennifer Lopez.

“It was certainly a bit of a challenge to say, ‘OK, how are we going to pack enough stuff into the 10 minutes to make it feel like a show, but also make it feel a little bit like every episode is its own self-contained adventure?’” said Nick Lang.

Landing Hamill was due to pure luck. Criss wrote to the “Star Wars” actor asking him if he'd consider being part of an episode that centered on a musician fascinated by King Kong. It turns out, completely unknown to the show creators, that Hamill has had a lifelong obsession with the King Kong franchise.

“The next thing I know, I’m in the booth recording Mark Hamill’s vocals on a song and just not being able to believe a goddamn second of it,” said Criss. “I have no idea how we pulled it off.”

Republic Records will be releasing the Season One music from the series on July 3, including Hamill's song “Mighty as Kong.”

“Royalties” is just the latest show trying to lure viewers to Quibi, which was launched at the beginning of the coronavirus pandemic and has endured a rocky start, with fewer subscribers than hoped for.

Criss, who has starred in everything from “Glee” to “The Assassination of Gianni Versace,” is optimistic that people will seek out a good show regardless of platform.

“At the end of the day, we hope that the content can speak for itself,” he said. “People are spending hours and hours of their life on Instagram anyway. They might as well spend a couple of those chunks of time on our show.”

It's a feeling Nick Lang shares: “If the content and entertainment is good and valuable and enjoyable, I think it will be valuable for people no matter what. So I hope that people can enjoy it.”