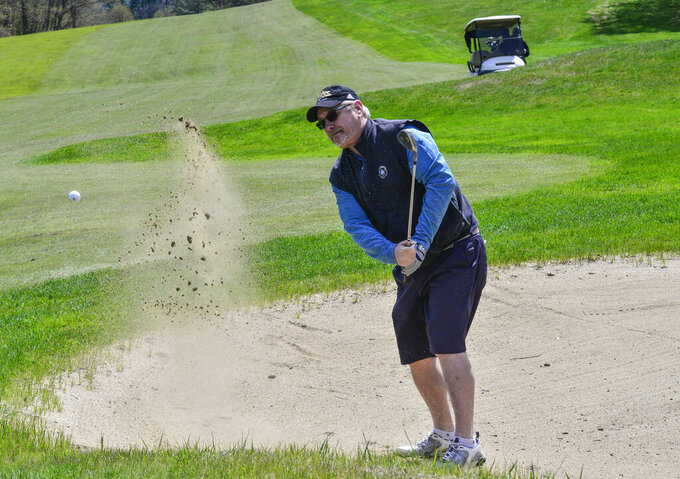 Chris Huffman, of Brattleboro, Vt., chips his ball out of a sand trap while playing golf at the Brattleboro Country Club, Friday, May 8, 2020, in Brattleboro, Vt.. Golfers return to the course after a delayed opening because of the COVID-19 pandemic. (Kristopher Radder/The Brattleboro Reformer via AP)

The news comes as the state takes steps to gradually reopen the economy and some parents return to work.

Child care centers may start transitioning on May 18 to bring back staff, conduct training, and prepare for reopening, Scott said. The updated guidance is expected next week.

To meet health and safety requirements, the state is creating about $6 million in restart grants for the programs, he said. Child care and camp workers will be included in the state’s expanded COVID-19 testing, officials said.

“For thousand of Vermonters summer camp and summer day camp it’s not a luxury, it’s a necessity,” said Ted Brady, deputy secretary of the Agency of Commerce and Community Development. “And the hundreds of camps across Vermont provide either child care, educational and enrichment programs and summer meal programs."

But he said summer camp will “look different this year.” Some camps have decided not to operate and others have adapted or will need to, said Brady, but he did not say how. The new health and safety requirements for camps is being developed and will be issued in the coming weeks, he said. Overnight camps also serve out-of-state residents, which will require additional mitigation, he said.

One will be open on Saturday in Colchester. Additional testing spots for those workers will be open next week in Bennington, Brattleboro, and Hartford, the Vermont Department of Health said Friday.

The Colchester clinic will be held at the Vermont Public Health Laboratory. It’s by appointment only and not open to the general public.

The April revenue picture in Vermont has been calculated and, as expected, it reflects the economic slowdown caused by the coronavirus pandemic. General fund revenue collections were almost 57%, or $141 million, below what had been previously forecast, officials said Friday.

In addition to a loss in revenue due to declines in economic activities, the state extended many tax filing deadlines and deferred payments.

Gov. Scott and the Legislature will be working together to confront the budget gap.

High graduations will not be the same this year. Current state guidelines limit gatherings to 10 people or less, with social distancing requirements.

For planning, schools should expect that larger group gatherings will not be allowed by the end of the school year, said Education Secretary Dan French.

“Schools are encouraged to plan creatively with their communities for opportunities to celebrate milestones and graduations in ways that are safe and supportive of students and their achievements,” he said.

On Friday, the Vermont Department of Health reported three new positive cases of the coronavirus, for a total of 919. The total number of deaths remained the same as Thursday at 53.

For most people, the virus causes mild or moderate symptoms, such as fever and cough, that clear up in two to three weeks. For some, especially older adults and people with underlying health problems, it can cause more severe illness, including pneumonia, or death.