A day in the life of a COVID ward: Just trying to hold on 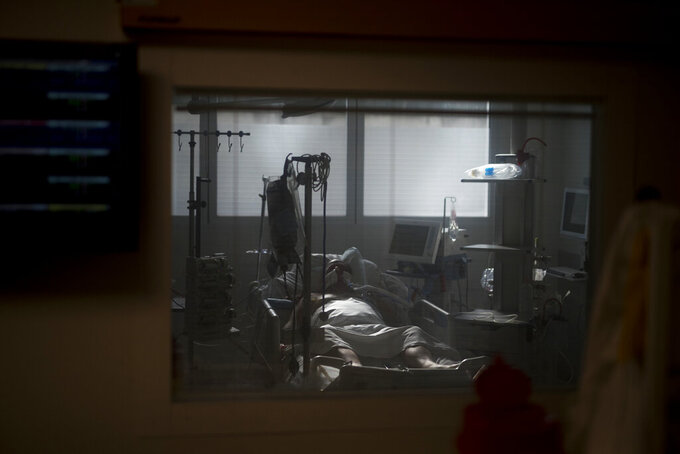 A 60-year-old COVID-19 patient is pictured through the window of an ICU room at the La Timone hospital in Marseille, southern France, Thursday, Nov. 12, 2020. (AP Photo/Daniel Cole)

MARSEILLE, France (AP) — It’s 2 p.m. in the intensive care ward of Marseille’s La Timone hospital, and Dr. Julien Carvelli is phoning families hit by the second wave of the coronavirus with news about their children, husbands, wives. With intensive care wards at over 95% capacity in France for over 10 days, Carvelli makes at least eight of these difficult calls every day.

In Marseille, this wave is bringing even more people to the ICU than the first one in the spring, many in more severe condition. Carvelli warns one father that his son may need to be put into a coma.

“For the moment, he’s holding on. But it’s true that — I don’t know what you’ve been told already — his respiratory state is worrying,” Carvelli acknowledges. There’s a long pause on the other end.

“Listen, do your best,” comes the strained reply at last.

France is two weeks into its second coronavirus lockdown, known as “le confinement.” Associated Press journalists spent 24 hours with the intensive care team at La Timone, southern France’s largest hospital, as they struggled to keep even one bed open for the influx of patients to come.

The doctors and nurses tell themselves and each other that they just have to hold on a little longer. Government tallies show infections may have reached their second-wave high point, and hospitalizations dropped last weekend for the first time since September.

But the medical workers are also frustrated that France did not prepare more in the months after the first wave. And while doctors and nurses were seen as heroes back then, this time is different.

“Before, they applauded every night. Now they tell us it’s just doing our job,” says Chloe Gascon, a 23-year-old nurse who has spent half her 18-month career under the shadow of coronavirus.

Marseille has been submerged with coronavirus cases since September. The port city, on France’s Mediterranean coast, was spared the worst of the virus last spring only to be hit with a vengeance as the summer vacation wound down. Bars and restaurants closed across the city on Sept. 27, more than a month before they shut down nationwide. It wasn’t enough.

A decade of budget cuts left France with half the number of intensive care beds this year, when it needed them most. By the time the first confinement ended on May 11, more than 26,000 people had died in France. The government pledged to take advantage of the expected summer lull to add beds and train reinforcements.

That was the time to act, when new infections were at their low point, said Stephen Griffin, a virologist at the University of Leeds.

“It was always bubbling away under the surface,” he said.

But it was only in early fall that work started on refashioning an acute care wing at La Timone, which opened less than two weeks ago and still has exposed wiring and a fiberboard barricade with duct tape. The promised reinforcements have been slow in coming as well, and any training they get is in the moment, as Pauline Reynier is learning.

It is only Reynier’s second shift as an ICU reinforcement. Her new colleagues barely know her name and have little time to teach. She largely learns by watching.

It takes months to train as an intensive care nurse, years to become experienced in the grueling specialty of holding death at bay.

This virus is even more demanding than the usual urgent challenges. Caregivers risk nearly as much as the patient, and dress accordingly, each time they enter a room. And so going to the bedside means planning multiple tasks at once: washing, toothbrushing, checking vitals, changing IV drips and, finally, turning the patient over to help improve breathing.

Reynier pulls on a long-sleeved apron over her scrubs, two pairs of gloves, a head covering, goggles and, finally, a second apron in plastic. Doctors performing an intubation or other major procedure wear a plastic face shield over the goggles.

For every person inside, someone stands on the outside to hand over anything needed and help strip off and discard the protective gear at the end.

“We just have to help them to hold on until their bodies can heal,” Carvelli says. “But intensive care is a terrible thing in itself. Not everyone can survive it.”

This is not what he tells families during the half-hour or so he spends calling them each day. Each call is over in minutes.

“We have to be reassuring and at the same time tell the truth. It’s a balance that is sometimes hard to find,” Carvelli says quietly.

Marseille was once one of the world’s richest cities, its natural harbor an international hub dating back to 600 BC and its founding by Greeks of Phocaea.

Many historians believe the first wave of the Black Plague in Europe originated in the Marseille port. The continent’s last major Plague outbreak, in 1720, killed half the city’s population. Local schoolchildren visit the Frioul archipelago, 4 kilometers off the coast, and the Hôpital Caroline, which cared for sailors with the Plague.

“What we’re going through now will be studied in history, because it’s exceptional,” Reynier tells her new colleagues.

By now, the day shift is nearly over. The bed in Room 12 is still free, and the physician overseeing the night shift hopes to keep it in reserve, to keep just a little slack in the overloaded health system.

“I want to keep a bullet in my chamber,” Dr. Fouad Bouzana says, between phone calls from other hospitals asking about open beds.

At 2 a.m., a man from the emergency room is admitted to the last remaining coronavirus bed.