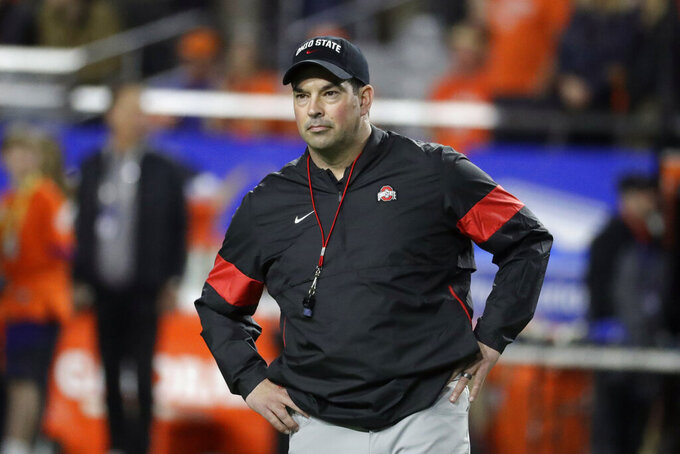 COLUMBUS, Ohio (AP) — Ohio State football is planning for a “somewhat normal” string of spring practices starting next month and culminating in the return of the spring game in mid-April, coach Ryan Day said Wednesday.

“It’s kind of a soft schedule based on a lot of things, but we’re hoping we can play the spring game possibly the April 17th weekend, and probably start the middle of March (with) four weeks of spring ball,” Day said. “That’s not set in stone right now, but that’s what we’re targeting.”

Spring practice was cut short last year as the pandemic worsened. The Buckeyes practiced three times before spring break and didn't return to the field as a group until the fall ahead of a delayed and truncated season.

Ohio State is striving for the return of the annual Scarlet and Gray game at Ohio Stadium, although the number of fans allowed to watch — if any — remains to be determined. The event typically draws a big crowd — nearly 100,000 in 2015 — but it's also critical for coaches in evaluating young players under game conditions.

“We’re planning on having a somewhat normal spring,” Day said. “We have six weeks of lead-up working in the facility, and then having a normal spring practice schedule. The thing that isn’t different is that we’re still under COVID protocols, so we can’t have a lot of group things together. We’re still following all those things, we’re still being tested and all that, but we’re hoping to be all together and not be broken up like we were last year.”

Last season was tumultuous for all of college football and for Ohio State in particular, with all the Big Ten stops and starts, canceled games and players missing because of positive tests or contact tracing. But the Buckeyes won the Big Ten and handled Clemson in a College Football Playoff semifinal before being routed in the championship game by Alabama.

Day said the 52-24 loss to the Tide didn't lead to any football soul-searching on his part. Despite having to replace some key players, including two-year starting quarterback Justin Fields, Day doesn't see the need for major shakeups based on the only loss of the season.

“What I think I've come to grips with after stepping away, is that final game was hard to evaluate with all the different dynamics at play,” he said. “Do we overreact? No, I'm not going to do that and not right now. I think that with a whole offseason, spring ball, a preseason, we're going to get the right personnel in place, we're going to make some adjustments schematically and then we're going to do an unbelievable job coaching.”

Day has made some internal moves to fill the opening on his staff left by the retirement of co-defensive coordinator Greg Mattison.

Fifteen of the 21 members of Ohio State's 2021 signing class are already on campus as early enrollees and will participate in spring practice.

Those include Kyle McCord, who is expected to compete with second-year players C.J. Stroud and Jack Miller III for the starting quarterback job; TreVeyon Henderson, who could make a case for immediate playing time at running back; and Jack Sawyer, one of the most sought-after prep defensive ends in the nation.