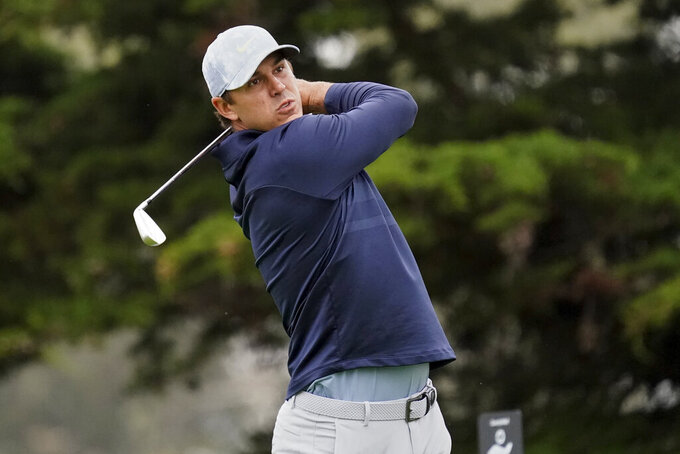 Brooks Koepka watches his tee shot on the 11th hole during the first round of the PGA Championship golf tournament at TPC Harding Park Thursday, Aug. 6, 2020, in San Francisco. (AP Photo/Jeff Chiu)

Bad backs, creaky knees, hardly any applause and one guy who even snapped his driver in two — there was still plenty to complain about as golf’s first major of the COVID-19 era finally got underway. But at least the weatherman got off scot-free.

Jason Day and Brendon Todd took advantage of a very un-San Francisco-like day to shoot opening round 65s and share the PGA Championship lead at TPC Harding Park, where a mild breeze and sunshine replaced the cold, dense marine layer that hung over the course during practice rounds earlier in the week. A raft of players battling assorted ailments appreciated the relative warmth, too, perhaps none more than 44-year-old Tiger Woods.

Day made his way around in the morning without a bogey, while Todd finally steadied an up-and-down afternoon round with pars at the last two holes. Despite their different routes, both reached the clubhouse with their noses in front of a large trailing pack just one shot behind.

With three top-10 finishes under his belt already this season, the Aussie had reason to be optimistic — “I feel like the game is slowly coming around,” Day said afterward — but also good reason to keep an eye out over his shoulder. Among the nine names clustered at 66 heading into Friday’s second round were: Brooks Koepka, a big-game performer seeking to become the first golfer in 64 years to win the same major three times in a row; Xander Schauffle, a rising star on the game’s biggest stages; and a few former, but still formidable major winners — Justin Rose, Martin Kaymer and Zach Johnson.

”I’m excited for the next three days,” said Koepka, who’s been hobbling by a knee injury for over a year. “I think I can definitely play a lot better. Just need to tidy a few things up, and we’ll be there come Sunday on the back nine.”

Woods’ 2-under 68 on Thursday marked the first time since the 2014 British Open that he kicked off a round at a major in the 60s. Both the forecast and the gangly rough at Harding were bound to test Woods’ surgically repaired back, but only one of those challenges materialized and he proved equal to the task. He missed five consecutive fairways during one stretch, but improvised and then putted well enough to run off three birdies in four holes and salvage what could easily have been a 2- or 3-over-par round.

Woods gave some of the credit to a longer putter he’s been leaning on lately, put into his bag because it allowed him to get in more practice on the greens. It paid dividends early, with a 10-foot birdie on his opening hole, and a 20-footer to save par just before he began his back nine.

“I thought anything today in the red was going to be good,” Woods said.

Speaking of leaning, Bryson DeChambeau snapped the head off his driver on the seventh tee, but the break wasn’t apparent until he put some weight on the club reaching down to retrieve his tee. DeChambeau used the time at home during the pandemic to pack another 20 pounds of bulk onto his 6-foot-1, now 240-pound frame and crank his swing speed that results in ball speed in the neighborhood of 200 mph. It showed early, as he sent four of his first six drives rocketing over 325 yards.

“I guess it’s all those swings I put into it,” he chuckled heading down the seventh fairway still carrying both pieces in his hands.

Fortunately, a local rule in effect at the PGA Championship allowed DeChambeau to replace the club shaft without penalty, and after putting the newly configured driver back into play off No. 9, he promptly went birdie-birdie and finished with a 68.

Of course, hitting the driver too hard wasn’t a problem for everyone. Jeff Hart, a club professional from San Diego who played briefly on the PGA Tour, spent his day trailing his pro playing partners Brian Harman and C.T. Pan — neither known as a long hitter — by some 50 yards off many of the tees.

“It’s a tough test for a 60-year-old man,” he said after shooting 77. “It’s like pitching in the major leagues with a 60-mile-an-hour fastball.”

While the tournament isn't lacking big-league names, most players concede they're still adjusting to the lack of the galleries. Rory McIlroy listened to the announcer introduce his playing partner Thursday as “the '99, 2000, 2006, 2007 PGA champion — Tiger Woods,” and braced himself for the familiar roar of the crowd. This time, there was silence.

“That,” McIlroy noted, “is definitely different.”