DC government unable to connect with White House on outbreak 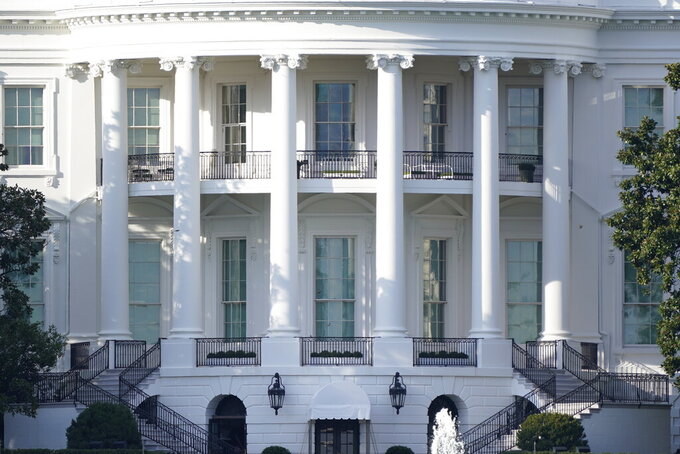 President Donald Trump is planning to return to the White House from Walter Reed National Military Medical Center, Monday evening, shown Monday afternoon, Oct. 5, 2020. in Washington. The president's personal physician, Dr. Sean Conley, told reporters on Monday afternoon that Trump is not out of the woods yet, but that there is no care at the hospital that the president cannot get at the White House. (AP Photo/J. Scott Applewhite)

WASHINGTON (AP) — Officials with the Washington, D.C., Department of Health have been unsuccessful in trying to connect with the White House to assist with contact tracing and other protocols regarding the ongoing COVID-19 outbreak that has infected President Donald Trump and several senior staff members.

“We have reached out to the White House on a couple of different levels, a political level and a public health level,” Washington Mayor Muriel Bowser said Monday. She added that a D.C. health department representative who reached out to the White House “had a very cursory conversation that we don’t consider a substantial contact from the public health side."

The lack of communication represents an unwelcome obstacle for the D.C. government, which has worked to contain the spread of the virus through mandatory mask requirements and limits on the size of gatherings.

Bowser acknowledged on Monday that White House medical officials “have their hands full” at the moment. But a D.C. official, speaking on condition of anonymity because they weren’t authorized to comment on the record, said White House doctors have not informed the D.C. Department of Health of any of the positive test results — a necessary step before contact tracing and quarantining can begin.

There have been multiple attempts to contact them, the official said.

Bowser’s government, which has publicly feuded with the Trump administration multiple times, is in a difficult position regarding the current outbreak. The Trump White House has operated for months in open violation of several D.C. virus regulations, hosting multiple gatherings that exceeded the local 50-person limit and in which many participants didn’t wear masks.

A Sept. 26 Rose Garden ceremony to announce Trump’s nomination of Amy Coney Barrett for the Supreme Court is now regarded as a potential infection nexus, with multiple attendees, including Notre Dame University President Rev. John Jenkins, testing positive afterward. Jenkins flew in to attend the ceremony from Indiana, a state D.C. classifies as a virus hot-spot — meaning he would have been expected to quarantine for two weeks upon arrival.

Washington’s local virus regulations don’t apply on federal property, but the current outbreak has blurred those distinctions. Trump inner-circle members like former counselor Kellyanne Conway, who has also tested positive, are D.C. residents, as are many of the staffers, employees, Secret Service members and journalists who have had close contact with infected officials. But the Health Department has been unable to conduct contact tracing or any of the other normal protocols. Instead it has been forced to entrust the White House medical staff to conduct its own contact tracing.

“There are established public health protocols at the White House that are federal in nature," Bowser said. “We assume that those protocols have been engaged.”

The White House said Monday that it had a “robust” contact tracing program in place and procedures that follow Centers for Disease Control and Prevention specifications.

Dr. LaQuandra Nesbit, head of the D.C. Health Department, said the process must begin with an official notification from a medical professional.

“If that information has been provided to us ... the D.C. contact trace force will do its work,” Nesbit said.

The situation has been further complicated by the apparent resistance of some senior Trump officials to voluntarily quarantine and the inability of the D.C. government to force the issue. Attorney General William Barr, who was repeatedly seen in close contact with Conway and other infected people, said over the weekend that he would limit his activities or movements. On Monday he reversed course and a spokesman said Barr would self-quarantine “for now.”

The CDC has said repeatedly that it has a team ready to help the White House investigate how the outbreak unfolded. The White House so far has not asked for such assistance, but such an investigation could sort out who started the outbreak and whether the spread happened at the outdoor gathering or at related indoor events or both, several infectious disease experts said in a conference call with reporters.

“The tools are present to dissect what actually happened,” said Dr. Robert Schooley, an infectious disease specialist at the UC San Diego School of Medicine.

Indoor spread is easier, but the attendees of the Rose Garden ceremony sat very close together for an extended time, said Linsey Marr, a professor of civil and environmental engineering at Virginia Tech. At this point, “I don’t think we can rule out transmission occurring outdoors,” Marr said.

He said those who com in close proximity to Trump would continue to be tested.

Bowser and Nesbit took pains Monday to avoid direct commentary or criticism of the White House — perhaps seeking to avoid the appearance of politicizing the crisis. Nesbit refused to specifically comment on the Sept. 26 Rose Garden ceremony. But she spoke in generalities about everyone's need to “make better decisions” in their personal and professional lives.