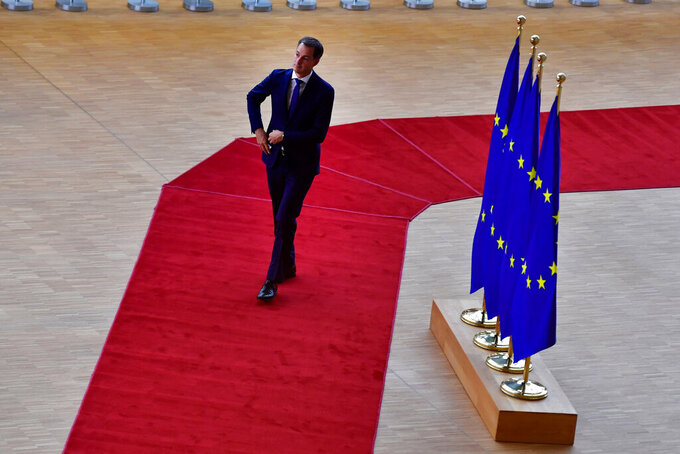 Belgium's new Prime Minister Alexander De Croo arrives for an EU summit at the European Council building in Brussels, Thursday, Oct. 1, 2020. European Union leaders are meeting to address a series of foreign affairs issues ranging from Belarus to Turkey and tensions in the eastern Mediterranean. (John Thys, Pool via AP) 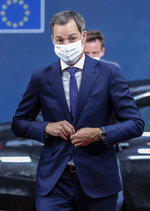 The new government emerged after nearly a year and a half of complex negotiations among parties divided along linguistic as well as political lines.

Even though De Croo succeeded a woman — Sophie Wilmes — his team of 20 ministers and state secretaries is the first in Belgian history to have gender parity. It's also relatively young, with the age average at 44.

After taking the oath in front of Belgian King Philippe, De Croo went to the European Union's parliament in Brussels, preferred over the Belgian house because it allows for more social distancing, to address the national legislature and highlight the momentous task ahead.

“The depth of this crisis is unprecedented and the threat of a new wave of infections and uncertainty about a vaccine casts a shadow over the recovery. We will have to live with the virus for some time," he warned.

He promised more testing, investment in protective material and vaccine development. Belgium, a nation of 11.5 million, has been especially hard-hit by the virus and reached the 10,000 death mark on Wednesday. While spending to keep the economy afloat will be necessary, a key challenge will be to keep the budget deficit under control.

Despite his age, the 44-year-old De Croo already has almost a dozen years in Belgian politics at the highest level and was vice premier in the outgoing government.

His team is brimming with fresh faces. “It is the woman's century," he said, referring to the title of his 2018 book and highlighting his efforts for gender equality. “That is why this government has as many men as women. It is a historic step for our nation."

The cabinet includes Green Vice Premier Petra De Sutter, a professor specializing in gynecology and fertility who is the first transgender woman to hold so high a government position in Belgium. She had been part of the EU parliament since last year.

The government formation took close to 500 days since the May 26, 2019 elections.

Beyond the linguistic strife between 6.6 million Flemings and 5 million Francophones that is a given in Belgian politics, the 2019 elections saw major advances by the far right in northern Dutch-speaking Flanders, and by the far left in southern francophone Wallonia.

It made compromise, an essential element of Belgian politics, even harder.

It was with obvious relief that De Croo headed off immediately to his first European Union summit, a short walk from the parliament.

“Happy to announce that in Belgium we finally have a new government," he said in his arrival statement. Soon after he found himself in a diplomatic cocoon with the likes of German Chancellor Angela Merkel and French President Emmanuel Macron.