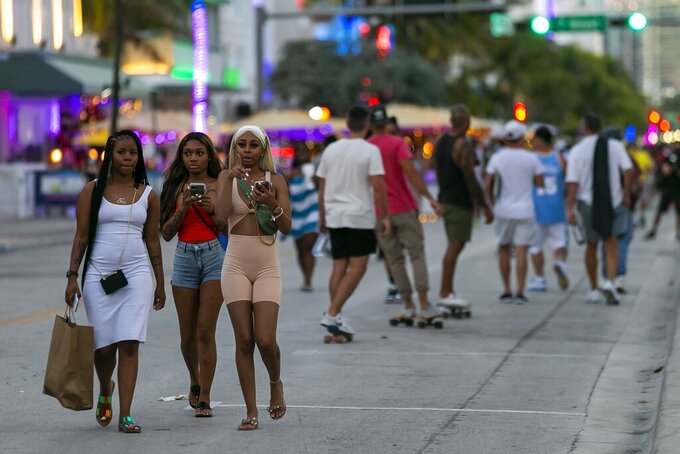 Tourists make their way down Ocean Drive during Spring Break in Miami Beach, Fla., Monday, March 22, 2021. A party-ending curfew is in effect in Miami Beach, imposed after fights, gunfire, property destruction and dangerous stampedes broke out among huge crowds of people. The curfew could extend through the end of spring break.(Matias J. Ocner/Miami Herald via AP)

ST. PETERSBURG, Fla. (AP) — Two North Carolina men on spring break in Florida have been charged with drugging and raping a woman who later died, possibly of a drug overdose in Miami Beach, police said Tuesday.

Meanwhile, in Panama City, a man has been charged with fatally shooting a teenager from Kentucky and another Florida man died when he jumped from the 23rd story of a beach resort with a parachute that did not open, authorities said.

The deaths and alleged crimes come amid continuing chaos in South Beach, where police have arrested hundreds of partiers involved in violence and property destruction. Most of those involved have not been college students on spring break, but adults from Florida and out of state, authorities have said.

The two men arrested in Miami Beach, Evoire Collier, 21, and Dorian Taylor, 24, have been charged with sexual battery as well as burglary with battery, theft and credit card fraud. The woman was found dead last Thursday after officers responded to “reports of an unconscious female” at a South Beach hotel, according to a police report. The men are accused of stealing the dead woman's credit cards to help fund their South Beach vacation, the report says. Online jail records did not indicate whether the two had an attorney who could speak for them.

Whether the two are charged with manslaughter or murder will depend on what caused the woman’s death, which a medical examiner has not yet released. Investigators are looking into whether the woman died of a drug overdose, possibly a substance supplied by the men, who said they gave her a “green pill," according to the arrest report.

In Panama City Beach, Christopher Lawrence Cox, 37, of Louisville, Kentucky, was charged with one count of murder and one count of attempted murder in the shooting death early Tuesday of a 14-year-old boy and the wounding of his stepbrother, also 14, police said in a news release. Both of the stepbrothers are also from Louisville. Online jail records did not indicate whether he has an attorney.

Police identified the man who died in the parachute fall as 31-year-old Timothy Ackerman of Panama City Beach.

South Beach was relatively calm Monday night, according to police. Since February, however, there have been over 1,000 arrests there amid brawls and damage to property. City officials imposed a curfew from Thursday through Sunday each week until April 12, including the nighttime closing of causeways leading to Miami Beach from the mainland.

Miami Beach Mayor Dan Gelber, mindful of the risk of the coronavirus spreading through such large and unmasked crowds, said the city known worldwide as a tourist destination and anything-goes attitude is trying to control the situation.

“We’re trying to get a handle on it. And we’re only doing it through policing and a curfew and shutting down our causeways coming into our city in the evening,” Gelber said in a television interview. “But that’s just a temporary stop. Hopefully it will calm down in a few weeks when other places open up and this pandemic really gets into the rearview mirror, where it’s not now.”