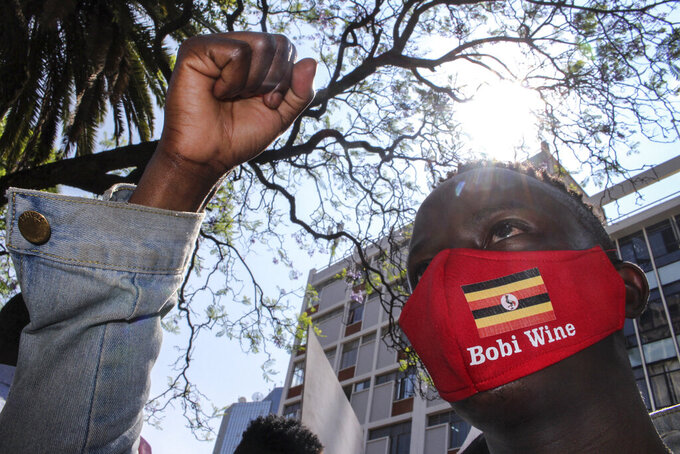 A Ugandan supporter of opposition presidential candidate Bobi Wine, wearing a face mask with the Ugandan national flag, joins others to protest his arrest and call for his release and an end to police brutality, outside the Ugandan High Commission in Nairobi, Kenya Thursday, Nov. 19, 2020. The death toll from protests over the arrest of Ugandan opposition presidential hopeful and musician Bobi Wine has risen to seven, Ugandan police said Thursday, as a second day of demonstrations began. (AP Photo)

KAMPALA, Uganda (AP) — The death toll from protests over the latest arrest of Ugandan opposition presidential hopeful and musician Bobi Wine has risen to 16, police said Thursday, as a second day of demonstrations continued in the country's worst unrest in a decade.

Kampala Metropolitan Police spokesman Patrick Onyango earlier in the day said the toll was likely to rise. At least 65 people were injured during the protests that erupted Wednesday in different parts of the East African country.

“There are those who are badly off,” Onyango said. Police did not say whether any of the deaths were from new clashes Thursday.

He said 350 people had been arrested and detained throughout the capital, Kampala. Police and army were deployed heavily as protesters blocked roads and burned tires.

Wine, who has been arrested many times in recent years, has captured the imagination of many Ugandans with his persistent calls for President Yoweri Museveni to retire after 36 years in power. The election is early next year.

According to a United Nations safety advisory seen by The Associated Press, the situation remained volatile with clusters of youth engaging in running battles with police in major towns around Kampala, while the rest of the country was calm.