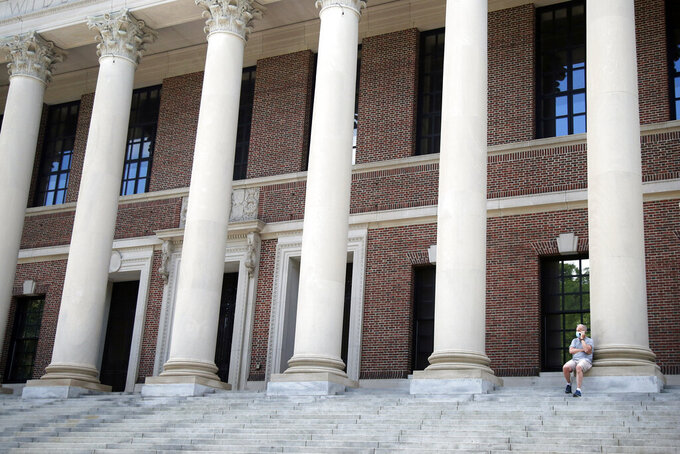 A man wearing a face mask in concern for the coronavirus, talks on his phone, Friday, June 26, 2020, on the steps of Harvard University's Widener Library, in Cambridge, Mass. (AP Photo/Elise Amendola)

BOSTON (AP) — Massachusetts hit another somber coronavirus milestone Friday as the number of confirmed and probable pandemic-related deaths climbed past 8,000.

The state Department of Public Health reported 50 new deaths and 233 new confirmed or probable cases, a slight uptick from the 226 new cases reported the previous day.

The number of people hospitalized with the disease has dropped to 791, down from 822 the previous day. Of those, 156 are in intensive care.

Despite the somber milestone, Gov. Charlie Baker said Friday that the numbers are “trending in the right direction,” noting that the seven-day average of new positive cases compared to total tests performed has dropped to 1.8%.

Baker on Friday proposed spending $275 million on a coronavirus economic relief package with emphasis on investment in small businesses, particularly those that are minority owned and in low-income communities.

The legislation is an update to an economic development plan filed before the pandemic fully hit, but it has been amended in response to the economic impact of the outbreak, the Republican governor said at a news conference.

The plan also included money to spur development to address the state's housing crisis, which he said was “laid bare" by the virus.

The pandemic has exposed the state's housing crisis, Secretary of Housing and Economic Development Mike Kennealy said. People forced to live in crowded apartments to make rent have been disproportionately affected by COVID-19, he said.

Baker's plan includes an additional $15 million, for a total of $40 million, to develop blighted and abandoned properties.

Baker also proposes enabling cities and towns to approve housing development with a simple majority vote rather than the current two-thirds supermajority.

There won't be massive crowds on the banks of the Charles River for the annual Boston Pops July Fourth concert this year because of the coronavirus pandemic, but organizers are promising a mix of old and new material for this year's show.

This year's broadcast-only show entitled “A Boston Pops Salute to Our Heroes” will honor front-line and essential workers as well as those who have died during the ongoing pandemic, according to the Boston Symphony Orchestra.

The show will also include rebroadcast highlights from previous July Fourth shows, including performances by Queen Latifah, Melissa Etheridge and Arlo Guthrie, and as always, will end with Tchaikovsky’s “1812 Overture," and a fireworks display.