A deeply divided Poland chooses a president in runoff vote 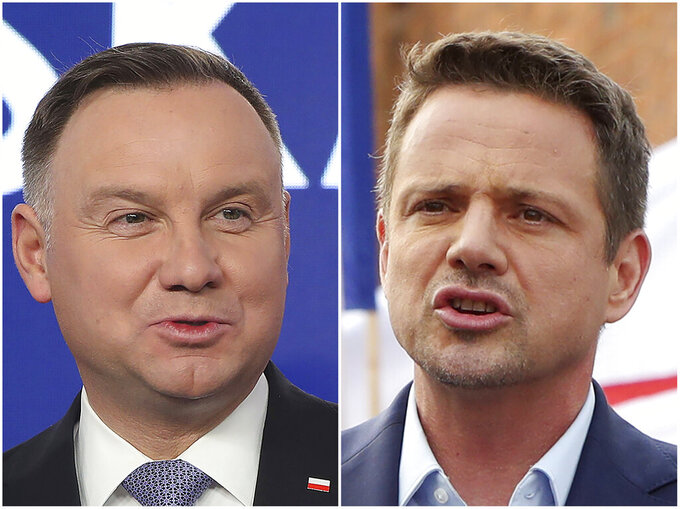 This combination of photos shows candidates in Poland's presidential election, Warsaw Mayor Rafal Trzaskowski, right, and Poland's President Andrzej Duda. The two candidates are heading into a razor's-edge presidential runoff election Sunday, July 12, 2020, that is seen as an important test of populism in Europe after a campaign that exacerbated a conservative-liberal divide in the country. (AP Photo/Czarek Sokolowski)

WARSAW, Poland (AP) — Two bitter rivals are heading into a razor's-edge presidential runoff election Sunday in Poland that is seen as an important test of populism in Europe after a campaign that exacerbated a conservative-liberal divide in the country.

The tough campaign has seen strains of homophobia and anti-Semitism, and both sides have sought backing from rival political camps in Washington.

President Andrzej Duda, a nationalist and conservative, is seeking a second term, but he faces a tough challenge from liberal Warsaw Mayor Rafal Trzaskowski. The first round in late June eliminated nine other candidates, leaving the two rivals, both 48.

Duda has made his opposition to LGBT rights a key campaign theme, while Trzaskowski signed a tolerance declaration last year that triggered a backlash against gay rights in the mostly Catholic country.

Duda has called LGBT rights an “ideology” more dangerous than communism, and on Monday he formally proposed a constitutional amendment to bar same-sex couples from adopting children.

He and the Law and Justice party have won the backing of older and rural Poles, helped by cash payments to families and other welfare programs.

But many liberal and urban Poles reject a brand of populism that they see as xenophobic and dangerous to their standing with European partners.

Last month, Duda was feted at the White House by President Donald Trump, who said he was doing a “terrific job.” Trzaskowski later turned to former President Barack Obama to discuss the state of Poland’s democracy.

As Duda's once-high poll numbers have fallen, his campaign has turned further to the right, seeking to incite fears of gays, Jews and even Germans, apparently to mobilize conservatives and those who remember the Nazis' World War II-era occupation of Poland.

The president has a key role in foreign policy and veto power over laws passed by parliament. During his five-year-term, Duda has approved laws giving the Law and Justice party vast new powers over Poland's top courts and key judicial bodies.

The European Union says the changes violate the democratic principle of separation of powers, but the government has insisted on moving forward with most measures, arguing it has a mandate from voters to reform the justice system.

Adding to strains in its relationship with its European partners has been coal-dependent Poland’s refusal to agree to the EU’s ambitious carbon neutrality goals, and a refusal to accept any migrants who arrived in large numbers in Europe in 2015.

Sunday’s vote will determine whether Law and Justice will keep control of almost all institutions of power in Poland, or will have to give a say to Trzaskowski, who belongs to the pro-EU Civic Platform party and has vowed to restore constitutional norms.

Duda won 43.5% of the vote in the first round. Trzaskowski got 30.5% but is expected to get the bulk of the centrist votes that went to the eliminated candidates. This leaves the final outcome hinging on the nearly 7% of voters who supported a far-right candidate, Krzysztof Bosak.

Bosak belongs to a party called Confederation, which Law and Justice leaders have denounced as pro-Kremlin and anti-Semitic, but whose votes Duda has been seeking.

“I see them as the most pro-Russian force in Poland," said Wojciech Przybylski, editor of Visegrad Insight, a policy journal focused on Central Europe. "They are anti-American, they are anti-Jewish. They accuse everyone of conspiracies to take away money from Poland.”

Public television broadcaster, TVP, flush with an additional $500 million of funding approved by Duda in the spring, has been airing a stream of positive news stories casting him as the defender of Polish families and Trzaskowski as someone who would sell them out.

A recurring allegation on the prime-time evening news has been that Trzaskowski would take away the popular social benefits and give the money to Jewish groups seeking reparations for prewar property.

Trzaskowski has called for a tolerant and inclusive society and vowed to stop a further erosion of judicial independence under Law and Justice, while also promising to preserve his rivals' popular welfare programs.

On Tuesday, he accused Duda of running a “cynical campaign against those people on the margins,” vowing to “stand on the side of those being attacked.”

The divide is so deep that the two could not agree to the conditions for a debate this week. Trzaskowski refused to debate Duda on the state broadcaster, while Duda refused to go on an independent U.S.-owned broadcaster, TVN.

The result was that each candidate held his own show, each alone in a friendly TV studio in different cities, taking questions at a “debate” as a lectern labeled with the rival's name stood empty.

In recent days, Duda and his allies have lashed out at foreign-owned media, raising concerns about press freedom.

Duda lashed out at a partly German-owned tabloid that reported on his pardon of a convicted sex offender, and also against a German foreign correspondent in Poland for critical coverage. He alleged “a German attack in these elections.”

“The Germans want to choose the president in Poland? I will not allow this!" Duda said at a rally.

Polish Deputy Foreign Minister Szymon Szynkowski vel Sek said Wednesday that he summoned the German charges d'affaires over “articles in the German media using manipulations and creating a clear impression of commitment for one of the candidates.”

"We likewise don’t try to influence the work of German foreign correspondents. They do their job within the framework of press freedom,” Seibert said.

The election was originally scheduled for May but postponed due the coronavirus pandemic, with over 36,000 confirmed infections and 1,500 dead in Poland. Prime Minister Mateusz Morawiecki last week urged older Poles — Duda's base — to vote.

He said the virus is waning and “there is nothing to be afraid of."