Defending champ Kenin: leg will be OK for Australian Open 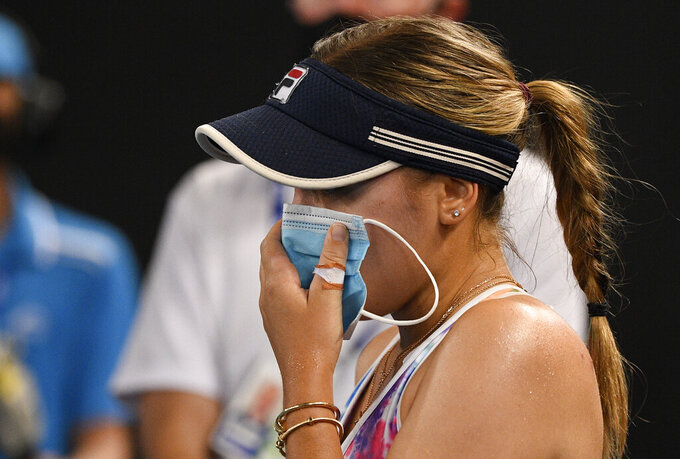 United States' Sofia Kenin holds a mask to her face during her match against Spain's Garbine Muguruza at a tuneup event ahead of the Australian Open tennis championships in Melbourne, Australia, Friday, Feb. 5, 2021.(AP Photo/Andy Brownbill) 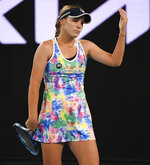 MELBOURNE, Australia (AP) — Defending Australian Open champion Sofia Kenin is putting her leg soreness down to the 14 days spent in quarantine and not able to play competitive matches until this week.

She felt pain in her upper left leg and it bothered her during a 6-2, 6-2 loss to Garbine Muguruza on Friday in the quarterfinals of a tuneup tournament for the year's first major.

She left the court, trying to hold back tears. After a night to reflect, she conceded that in the match she was “quite down. I wasn’t too happy with myself.”

Kenin said she treated her leg for an hour before the match and also later.

On Saturday, the pain wasn’t there.

She's already looking forward to her first-round match against Australian wild-card entry Maddison Inglis as she bids to defend a major title for the first time. After a three-week delay, to cater for the strict COVID-19 protocols Down Under, the Australian Open starts Monday.

And yes, she has looked further ahead in the draw — particularly up to the fourth round, which could possibly be Jennifer Brady or Johanna Konta.

After that, she has a feeling she knows who might be there.

Two-time Australian Open champion Victoria Azarenka and Elina Svitolina are in her quarter. They're all in the same half of the draw as top-ranked Ash Barty, the local favorite Kenin upset last year in the semifinals.

Now that she has won a major and reached another final — at the French Open — she knows there's players out there who want to avenge losses to her.

She got a taste of that against Muguruza in the Yarra River Classic.

“She obviously came out hungry for blood, I guess, to win. But I obviously did not mentally prepare so well," Kenin said. “Obviously it affected me a little bit (but) I’d rather do better in AO than here, so try to take some positives out of it.

“I told my dad this morning, I’d rather lose to Garbine yesterday and win Australian Open.“

There's been a series of injuries late this week, with star players withdrawing from matches later in some of the six tournaments crammed into the schedule this week to give players some preparation matches.