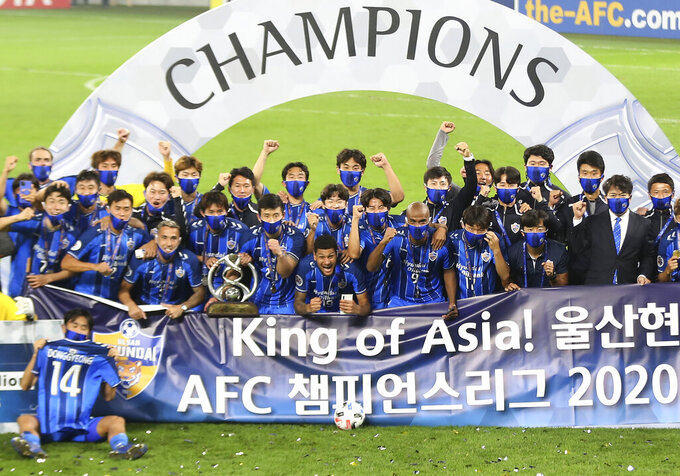 FILE - In this Dec. 19, 2020, file photo, Ulsan Hyundai's players celebrate with their trophy after the AFC Champions League final match against Persepolis in Al Wakrah, Qatar. The Asian Champions League's eastern zone competition will finally kick off after a series of delays and withdrawals. But the troubled tournament has a different look to previous editions of the continental club championship. (AP Photo/Hussein Sayed, File)

SEOUL, South Korea (AP) — The Asian Champions League’s eastern zone competition will finally kick off this week after a series of delays and withdrawals, though the troubled tournament has a different look to previous editions of the continental championship.

For the second successive year, Asia’s flagship club event is operating under the shadow of the COVID-19 pandemic and the travel restrictions that have been put in place by governments across the region. All games in Groups H and I will be contested in Uzbekistan, with Thailand hosting all games in Groups F, G and J.

Defending champion Ulsan Hyundai of South Korea is heading to Bangkok for six games in the space of two weeks and coach Hong Myong-bo is wary of the different conditions as he prepares for an opening game against Viettel of Vietnam on Sunday in Group F.

“My team might be better than other clubs from an objective point of view, but two other Southeast Asian teams are familiar with the weather and the environment of the venue,” Hong, captain of the South Korean national team that reached the 2002 World Cup semifinals, said. “I heard Thailand enters the rainy season in July. We have to get ready to play football in the rain.”

Ulsan’s chances of defending its crown have improved due to events elsewhere. Australian A-League clubs Sydney FC, Brisbane Roar and Melbourne City pulled out of the competition, following the May withdrawal of Shan United of Myanmar. No official reason was published by the A-League clubs, but with travel into and out of Australia tightly restricted and the continental competition clashing with the playoffs in the domestic season, it was difficult for them to compete.

“Obviously we want to play in the Champions League,” Sydney coach Steve Corica said at the time. “It’s what we finish first or second for, to be involved in a good competition like that, but it doesn’t look like it’s going to work out this year for us.”

Chinese teams have similar issues but instead of withdrawing, two-time champion Guangzhou FC, Beijing Guoan and Shanghai Port have sent squads with a mix of youth and reserve players. Beijing’s squad of 20 players have an average age under 21, making it the youngest roster in the competition’s history.

The withdrawals and the weakened teams may lead to improved performances from countries that have yet to lift the trophy. Thailand has an unprecedented four representatives in the competition and United City will be among the first ever representatives from the Philippines to appear in the group stage

“We have been close to reaching the group stage in the last two years although we honestly knew that it was very difficult to eliminate Chinese or Japanese teams due to their level, but we have always fought very well and that made us feel proud,” United City striker Bienvenido Maranon. “Now we are excited to finally play a part in the group stage and we will enjoy it like never before.”

Play in the eastern zone gets underway with three-time Asian champion Pohang Steelers taking on first-time qualifier Ratchaburi FC of Thailand on Tuesday and Johor Darul Ta'zim of Malaysia playing Nagoya Grampus of Japan on Wednesday in Group G.

The five group winners and the best three runners-up will progress to the second round, due to take place in September. The west zone completed its group stage in April. The tournament is divided into two geographic zones until November’s final.