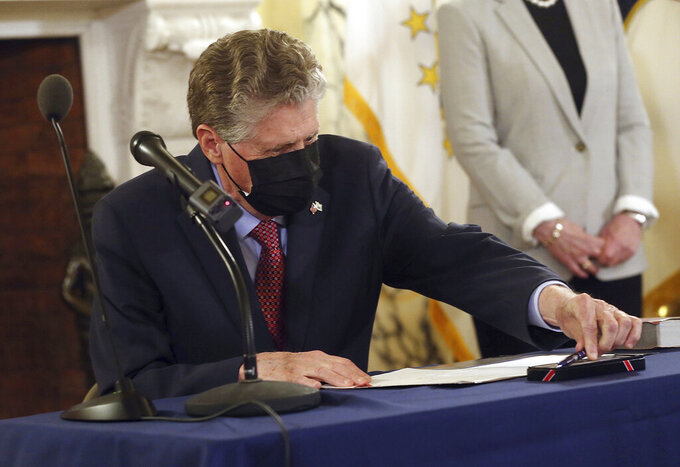 McKee, 69, has served as the state’s lieutenant governor since 2015. He will serve out the remaining 22 months of former Gov. Raimondo’s four-year term.

Raimondo, 49, is a fellow Democrat and former venture capitalist whose new job will be to help set the Biden administration’s trade policy and promote U.S. opportunities for growth domestically and overseas. She received Senate confirmation Tuesday.

McKee is a lifelong Rhode Islander who earlier served as mayor of Cumberland, a town of about 33,500. He was sworn in about a year after the first case of coronavirus was confirmed in Rhode Island — a health crisis that overshadowed Raimondo’s final year as governor and will dominate McKee’s first.

The new governor said in a statement after Tuesday’s brief Statehouse ceremony that he was “honored and humbled” to lead the state at a critical time.

“I will work hard, day in and day out, on behalf of Rhode Islanders in all 39 cities and towns to ensure we come out of this pandemic stronger than we went in," McKee said.

His office said a public inauguration will be held Sunday on the Statehouse steps. He’s also slated to make stops Wednesday at vaccination clinics and a small business in the Providence area as well as sign an executive order.

The Democratic Governors Association, meanwhile, quickly welcomed him to the fold.

“A lifelong public servant, Gov. McKee has the experience needed to lead Rhode Island out of this pandemic and towards economic recovery,” New Mexico Gov. Michelle Lujan Grisham, who chairs the group, said in a statement that also thanked Raimondo for her service.

Later this month, McKee is required to submit to lawmakers a proposed budget for the fiscal year that starts July 1. The deficit is already estimated at more than $300 million.

The transition from Raimondo to McKee couldn’t be any more stark in terms of approach and personality, but dramatic change isn't expected from the new leadership, said Joseph Cammarano, a political science professor at Providence College.

Raimondo had a rising national profile even before she became governor, he said. As the state's general treasurer, she successfully pushed for a major overhaul of the state pension system. Meanwhile McKee, who has run small businesses for decades, including his family’s heating oil company, has been part of local politics for years but has never been quite front and center.

“He’s the low key, behind-the-scenes guy," Cammarano said. “He would not have been anyone’s first pick.”

McKee, who graduated from Assumption College in Massachusetts and earned a master’s degree from Harvard, has been critical of the state’s vaccine rollout efforts under Raimondo, but said late last month Rhode Island was doing a better job of getting coronavirus vaccines into the arms of more people.

He’s also pledged to retain many of the top officials and experts Raimondo has tapped to lead the state’s pandemic response.

“I expect him to be competent, capable and lowkey,” Cammarano said. “In a way, he’s a return to the Rhode Island governors of the past.”

The new governor's biggest strength is arguably the ties he’s forged as a respected former mayor, said Aaron Ley, a political science professor at the University of Rhode Island in South Kingstown.

As he prepared to take office, McKee drew on many of his former peers in the Blackstone Valley, a region of old mill cities and towns north of Providence that helped power the American Industrial Revolution.

“He gets it. He knows what the 39 communities are going through,” said Johnston Mayor Joseph Polisena, who has known McKee for more than a decade and is among the municipal leaders advising him. “He understands what we need and knows that as the cities and towns go, so goes the state.”

Rhode Islanders will also find McKee is “measured” and “has no ego,” willing to surround himself with experts from a variety of backgrounds and differing opinions, he added.

“He’s going to put people at ease," Polisena said. "He knows the state. He’s ready for the job.”

One decision McKee gets to make that his predecessor didn’t: who will be the next governor-in-waiting.