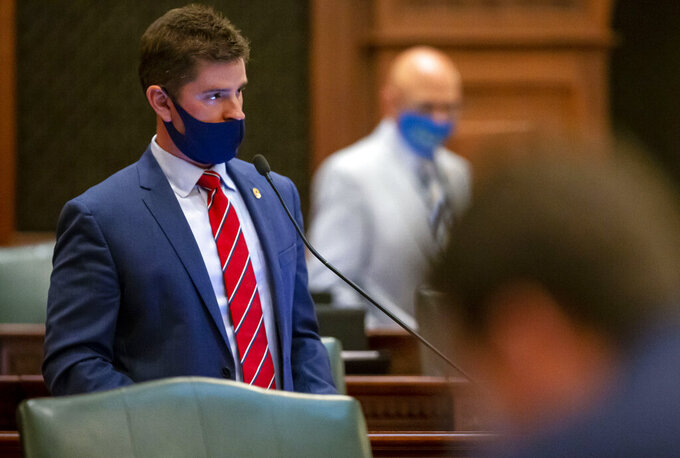 SPRINGFIELD, Ill. (AP) — Democrat-drawn legislative district maps to govern elections in the Illinois General Assembly for the next decade won legislative approval Friday after a day of Republican acrimony and opposition from Democratic-leaning community groups who say they've been ignored and haven't gotten clear answers about how the lines were drawn.

The next stop is the desk of Gov. J.B. Pritzker, who once promised to veto maps drawn by politicians.

The House voted 71-45 along party lines Friday night after 2 1/2 hours of debate to approve new district lines required after each decennial Census to reflect population shifts. It followed a similarly partisan Senate vote, 41-18, in favor of the maps drawn outside of the public eye but which Democrats contend were influenced by opinions voiced during 50 public hearings since April.

All eyes are now on Pritzker, who as a Democratic candidate for governor in 2018 promised to reject a political product, opting for an independent, nonpartisan commission to create the districts. But Pritzker this month backed away from the pledge, saying only that he would nix an “unfair” map. Even though this is the final week of the General Assembly's spring session, Pritzker has not appeared publicly for days.

“Gov. Pritzker, speaking directly to you: Veto these maps, because as we proved today, they are (politically) drawn,” said Springfield Rep. Tim Butler, the House Redistricting Committee’s ranking Republican.

Republicans and grassroots activist groups have decried the process concluded without benefit of official U.S. Census numbers, which have been delayed by the COVID-19 pandemic. Democrats contend they must be completed by June 25, which is simply the date on which they lose complete control of the work.

During hastily called final hearings of the Redistricting Committees in both House and Senate, Republicans slammed the House redistricting leader, Rep. Elizabeth “Lisa” Hernandez of Chicago, after she acknowledged she didn't know until Thursday night all the sources of data that were used — six days after the first version of the map was sprung on the public.

Even then, she struggled to explain what numbers were mined or how, other than pointing to the Census' American Community Survey, an ongoing review of changes occurring in communities, which critics maintain are not suitable for drawing lines. She added that input from 50 public hearings and “election results” were sources but was unable to elaborate, and repeatedly said she did not have a list of individuals who put lines on paper.

Despite the late notice of the hearings, representatives of several interest groups were able to tune in to complain about being left out.

“Until you send a message that inclusion counts, it’s just talk...,” Dilara Sayeed of the Illinois Muslim Civic Coalition said via video conference. “We can’t move forward. We can’t have 10 more years of this.”

Political lines must be redrawn after each decennial Census to reflect changes in population and ensure protection of voters’ rights. They must be compact, contiguous, and of equal population, among other things.

Critics wonder why the map can't wait for release of official U.S. Census numbers, which won't be available until late summer. A consultant who's on contract with House and Senate Democrats for $200,000 says the ACS numbers from before the 2010 Census varied only slightly from the official count.

The constitution requires the Legislature — currently controlled by Democratic super-majorities — to produce a map by June 30. After that, the project goes to a bipartisan commission. Each time that's occurred since 1980, the panel has deadlocked and the name of the partisan tie-breaker is drawn from a hat.

During House debate, several Republicans called out Democrats for previously espousing independent map-making, reading from news articles and newspaper endorsement questionnaires their pledges to take politics out of the process. Democratic Rep. Will Guzzardi cried foul, contending it's not “inconsistent to say, ‘I believe the system should be different and nonetheless, I’m participating under the rules as they are today.'”

Virtually nothing was said about the cartography before the first map popped out late May 21. A revision appeared late Thursday which Hernandez maintained was “absolutely influenced” by public input. GOP Rep. Tom Demmer of Dixon claimed there was an “intentional effort” to withhold details from taxpayers, adding, “It makes a mockery of this process.”

Republicans also criticized the surprise remap produced this week of state Supreme Court districts, the first revision in 60 years. The GOP claims it's because Democrats fear losing their majority on the high court. The House approved that map Friday afternoon.