Democratic push on COVID-19 aid welcomed by some in Georgia 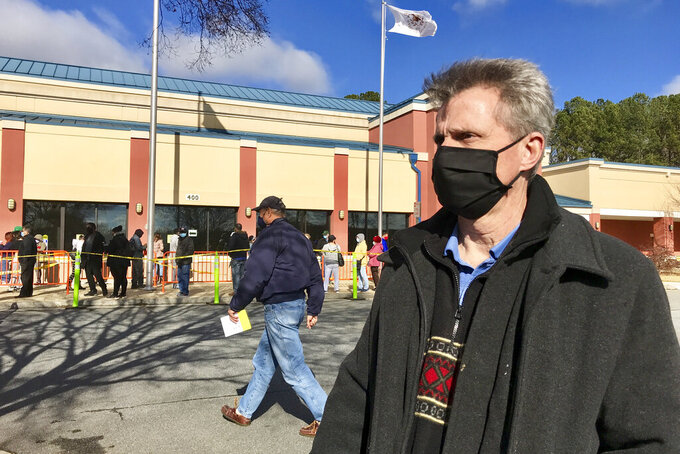 ATLANTA (AP) — As Congress bargains over more financial relief during the coronavirus pandemic, some of the hundreds of thousands of Georgians who are casting ballots for the Jan. 5 runoffs that will determine which party controls the U.S. Senate are calling for action.

"I think the stimulus is overdue,” said handyman Louis Peters, 64, who voted Monday on the first day of early-in-person balloting in the Atlanta suburb of Marietta. He chose Democrats Jon Ossoff and Raphael Warnock over incumbent Republican U.S. Sens. David Perdue and Kelly Loeffler.

The COVID-19 epidemic has done widespread economic damage in the state. An Associated Press Votecast survey in November found 38% of Georgia voters had someone in their household who lost a job or income because of COVID-19. And for some, the situation is getting worse. The federal government at first offered those who were unemployed $600 and then $300 weekly supplements, but those supports are now long gone.

More than 90,000 state residents have already run through their available unemployment benefits, according to Georgia's Department of Labor. More than 300,000 Georgians were receiving special federal unemployment benefits as of Dec. 5, but without congressional action, those will end Dec. 31. That is the same day the U.S. Centers for Disease Control and Prevention's order blocking evictions will expire, Peters noted.

“I think people are going to start hurting bad now,” he said.

Warnock, and particularly Ossoff, have been trying to highlight the impasse over more aid, blaming Republicans for inaction. Ossoff on Sunday took aim at Perdue during an interview on MSNBC.

“Get on a plane to Washington and vote for $1,200 stimulus checks for your constituents who are hurting right now, senator," Ossoff said. "The fact that they’ve gone eight months without passing direct economic relief for working families and small businesses — they don’t care. They don’t care about the suffering of working people in this country.”

Republicans, though, take credit for the earlier massive relief package, particularly money that flowed to small businesses through the Paycheck Protection Program. They say the Democrats are the real obstructionists.

Aid talks have intensified in recent days as lawmakers hustle to avoid going home for the holidays empty-handed. Democrats have pushed for a more ambitious package that would extend unemployment benefits, assist hospitals and schools, and include money for state and local governments struggling to balance their budgets because of the pandemic. Republican Senate Majority Leader Mitch McConnell, however, opposes the state and local government aid and has insisted that a bill include provisions shielding businesses from COVID-19-related lawsuits. In the interest of striking a deal, the two sides indicated Tuesday night that they were willing to compromise on both issues.

Democratic President-elect Joe Biden, in Atlanta on Tuesday to campaign for Ossoff and Warnock, said Perdue and Loeffler would present a “roadblock” to needed aid if they were reelected.

A new stimulus package “should deliver direct cash payments to people right away, when they badly need it to stay on top,” said Biden, who voiced support for a package that would include aid to state and local governments and for COVID-19 testing and vaccination. "Your two Republican senators are not supporting that kind of package. But Jon and Raphael do. There's so much more we can get done.”

Georgia's government has been hit as well. Although tax collections have been strong this fall, lawmakers say they doubt they can restore all the $2 billion-plus in budget cuts made last summer. Trouble in the travel industry has also injured Atlanta, where Delta Air Lines, with more than 34,000 employees, is the region's largest employer, according to the Metro Atlanta Chamber of Commerce.

University of Georgia political scientist and pollster Trey Hood said the stimulus issue may drive turnout, especially on the Democratic side.

But even many Republicans in Georgia say Congress should speed up financial help.

“I haven’t really had a job since March,” said Mark Merchant. The comedy ventriloquist from the Atlanta suburb of Stone Mountain voted on Monday for Perdue and Loeffler because he said he feared giving Democrats a “rubber stamp to invite absolute socialism into this country.”

Merchant said he normally works on cruise ships and in community theaters, but they’re all shut down. He said he worked three nights recently at an Atlanta comedy club, his first gig in months.

“It was convenient since I think my unemployment just ran out,” Merchant said.