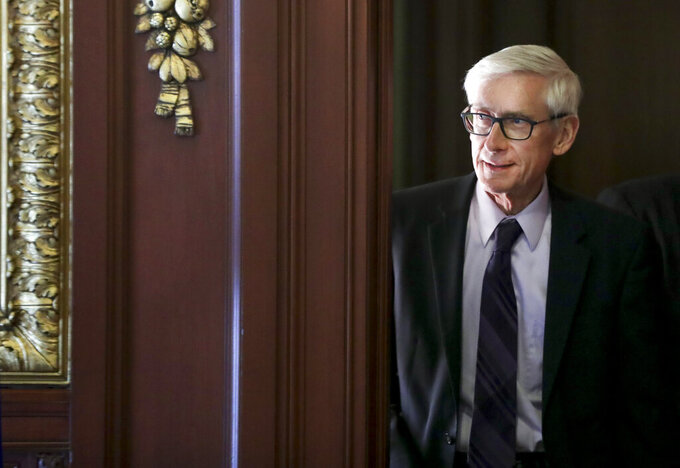 FILE - In this March 21, 2019 file photo, Governor Tony Evers arrives to a ceremony at the State Capitol in Madison, Wis. Gov. Evers made it official Saturday, June 5, 2021, announcing his bid for a second term in the battleground state where he stands as a Democratic block to the Republican-controlled state Legislature.(Steve Apps/Wisconsin State Journal via AP) 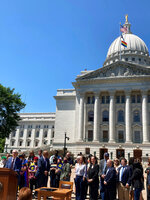 MADISON, Wis. (AP) — Wisconsin Gov. Tony Evers made it official Saturday, announcing his bid for a second term in the battleground state where he stands as a Democratic check on the Republican-controlled state Legislature.

Evers, 69, told The Associated Press in a Friday interview that he decided to run again because he has unfinished business and needs to remain able to stop Republicans through his veto powers, especially as they advocate for election law changes that would make it harder to vote absentee.

“Even though I haven’t played much hockey, I have come to appreciate the role of being a goalie,” Evers told the AP.

Evers announced his plans during the Wisconsin Democratic Convention, which was held virtually Saturday for a second year in a row.

“We have lots of work to do that the people of Wisconsin expect us to work on,” Evers told the AP, citing Medicaid expansion, criminal justice reform, expanding education funding and creating an independent redistricting process.

The first three and a half years of Evers' term have been marked by clashes with the GOP-led Legislature and his handling of the coronavirus pandemic. Republicans brought successful lawsuits accusing Evers of overstepping his authority with closures, capacity limits and mask orders meant to slow the spread of the virus.

Evers told the AP that his handling of the pandemic saved lives and he listed it as “easily the most important thing that we’ve done.”

“And, of course, we’ve done that with the backdrop of having not a whole lot of help from the Republicans in the Legislature,” Evers said.

Wisconsin Republican Party spokeswoman Anna Kelly accused Evers of a multitude of failures, including not getting kids back to school sooner and not getting benefits to the unemployed quickly enough during the pandemic.

“Evers has nothing to campaign on except a record of incompetence, absent leadership and four years of zero accomplishment," she said.

Evers said it's easy to criticize the lag in unemployment payments, but the situation was unprecedented.

“I feel badly that it took so long,” he said of ending the backlog. “But we were we were in a situation where people were being cut out of their jobs at a much higher rate than what we would expect.”

Evers, a former state superintendent of schools, was elected governor in 2018, when he narrowly defeating then-Gov. Scott Walker, a 2016 Republican presidential candidate known for his 2011 law that effectively ended collective bargaining for most state workers.

Republicans fought with Evers before he even took office, calling a lame duck session three weeks before his term began to weaken his power.

The state Senate in Evers’ first year in office fired his state agriculture secretary, an unprecedented use of power. But the fired secretary, Brad Pfaff, got some measure of revenge by being elected to the Senate in 2020.

The state Senate also refused to confirm Evers’ secretary of the state health department, Andrea Palm, who was the point person for the virus response and now serves as the deputy U.S. Department of Health Services secretary under President Biden.

Evers also tried to delay the spring 2020 election early in the pandemic, but the Wisconsin Supreme Court sided with Republicans and refused to postpone it.

Evers tried unsuccessfully to force the Legislature to take up a number of hot-button priorities of Democrats, including police reforms,gun control, improving the state's unemployment system and expanding Medicaid. His calls to legalize marijuana have also been repeatedly rejected.

Evers has not shied away from vetoing Republican bills, including ones that would have restricted access to abortions. In 2020, he and Democrats launched a “Save the Veto” campaign that focused on keeping Republicans from gaining large enough majorities to override a veto. They succeeded, but with Republicans still holding large majorities, the party will make winning back the governor's office a top priority in 2022.

Evers said he hopes that Lt. Gov. Mandela Barnes, who is considering a run for U.S. Senate next year, will be his running mate, but the decision is Barnes' to make.

Evers also cited as a success the state budget he signed in 2019 that increased funding for roads, health care and public schools, all high priorities, while also cutting taxes for the middle class. The Legislature is currently working on the next budget, summarily turning back hundreds of Evers proposals from the start in yet another defeat for the Democratic incumbent.

Evers also resumed granting pardons, which Walker did not do over his eight years as governor, and Evers rewrote a contract with global electronics leader Foxconn Technology Group to dramatically scale back available tax credits.