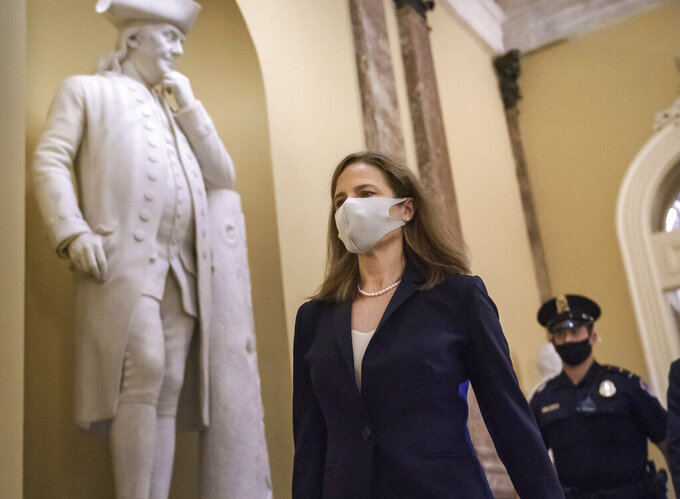 WASHINGTON (AP) — Senate Democrats are set to boycott voting on Supreme Court nominee Amy Coney Barrett at the Senate Judiciary Committee on Thursday, but there is little they can do to prevent Republicans from rushing to confirm President Donald Trump's pick before Election Day.

The Judiciary Committee, which is controlled by Republicans, is expected to change the rules if necessary to recommend Barrett's nomination to the full Senate. Senators are planning a rare weekend session to secure her confirmation on Monday.

"We should not be moving forward on this nomination," he said, calling Barrett's views “so far out of the mainstream." No Supreme Court nominee has ever been confirmed so close to a presidential election.

He immediately forced a vote to recess the Senate until after the Nov. 3 election, but it failed. “These are all such violations of American norms, values, decency and honor,” he said.

With Republicans holding a 53-47 majority in the Senate, Trump's pick for the court is almost certain to be confirmed. Boycotting Thursday's committee hearing won’t stop the process, but could potentially force Republicans on the panel to alter the rules to keep the confirmation on track.

Committee rules say at least two members of the minority party, Democrats, would need to be present to constitute a quorum for doing business. Graham made no mention of the process ahead, if Democrats fail to show up.

But Mike Davis, a former top aide on the panel who now advises Senate Republicans, said the committee was well within its normal practice to hold the vote, even if Democrats skip it. He said the longstanding practice has been to allow business to go forward if all members of the majority, Republicans, attend.

Two Republican senators on the panel, Mike Lee and Thom Tillis, tested positive for COVID-19 after attending the Rose Garden event where Trump announced Barrett as his nominee. The panel established remote operations during the coronavirus pandemic. Those two senators have since returned to in-person sessions, saying their doctors cleared them from quarantine.

Barrett, a 48-year-old appellate court judge who has spoken out against abortion and a court ruling on the Affordable Care Act, is on track to lock in a 6-3 conservative majority on the high court for years to come.