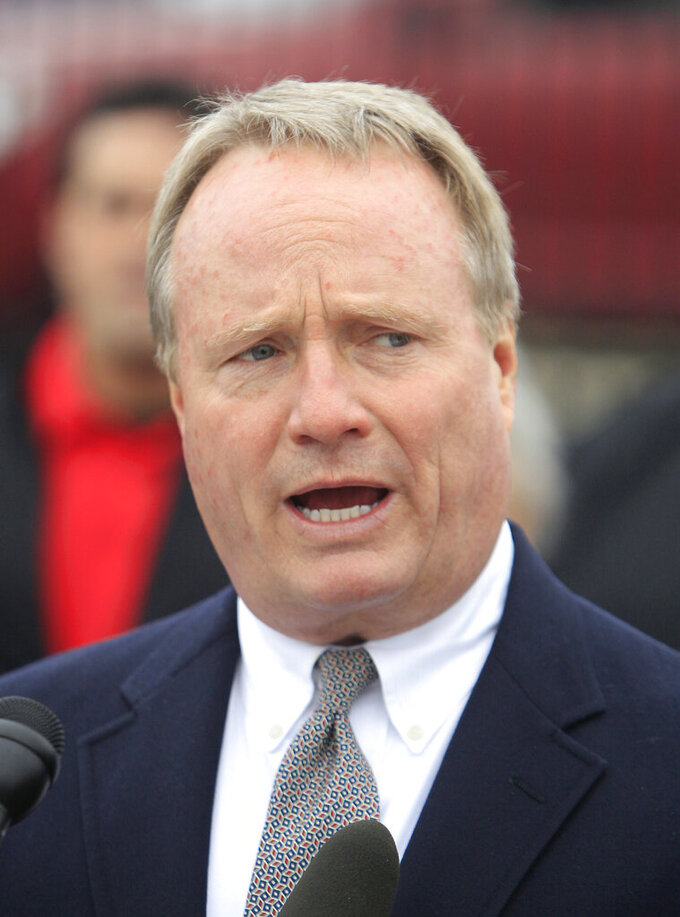 CINCINNATI (AP) — First-time candidates in several congressional districts around Ohio are giving Democrats hope for another first: unseating a Republican under the state’s current map.

The GOP-dominated redistricting that took effect with the 2012 elections gave Republicans a 12-4 advantage in the state’s delegation to Congress that has held firm. Democratic voters were packed into four seats, while GOP candidates have repeatedly sailed to reelection.

“The challenge is a very unfavorable map,” said David Niven, a University of Cincinnati political scientist who testified in a federal court challenge to Ohio's districts. “What we've seen in the history of this congressional map is not a single challenger has taken down an incumbent.”

While a three-judge federal panel in Cincinnati found in 2019 that the districts were drawn unfairly, the U.S. Supreme Court subsequently decided that gerrymandering issues were matters for state legislatures.

However, Democrats this year see bona fide opportunities in as many as five seats and solid chances for candidates against 12-term Rep. Steve Chabot, of Cincinnati, and nine-term Rep. Mike Turner, of Dayton.

“The undefeated streak of the map is in real jeopardy,” Niven said.

Kate Schroder, a public health professional in Cincinnati, is in a tight race with Chabot in a district that includes Republican-friendly Warren County. That county was added to Chabot's district in the new map for 2012 after he was unseated in 2008 during Democrat Barack Obama's election to the presidency. Chabot, a longtime conservative, won his seat back in 2010.

Chabot has tried to portray Schroder as too liberal for the district, while she has focused on health care issues.

In the Dayton-based 10th District, Democrat Desiree Tims has attracted enough funding and campaign support to be within range of Turner, whose career has been highlighted by armed services committee work including expansion of the district's Wright-Patterson Air Force Base.

Tims, the granddaughter of sharecroppers, grew up on Dayton's west side and has worked in Washington as an aide in the White House and for two U.S. senators.

Joe Biden's late surge in the presidential race to lift the swing state into a nearly dead heat down the stretch against President Donald Trump has added to Democratic hopes for House and other lower-ballot races.

They're watching closely in the central Ohio district held by Rep. Troy Balderson, who narrowly won back-to-back special and general elections in 2018, and in the state's far northeast corner, where Rep. Dave Joyce is in his fourth term.

Shearer has taken on the steady flow of misinformation confronted by voters of the 12th District and sought to link Balderson to Trump, who had endorsed and campaigned for him in the past.

Balderson, a former state lawmaker and small business owner, has struck a centrist tone, focusing on his efforts to combat the coronavirus pandemic and his bipartisan efforts to boost STEM education and broadband internet access.

In the 14th District east of Cleveland, first-time Democratic candidate Hillary O’Connor Mueri's strong resume has buoyed Democrats' hopes of a victory in a district that has trended in their direction in recent years.

Mueri, a lawyer and former naval flight officer from Painesville, has advanced pro-union, pro-abortion rights positions and criticized Joyce as representing special interests and corporations over constituents back home.

Joyce, a former Geauga County prosecutor from Chagrin Falls, has won support in the politically divided district for being willing to negotiate with and at times stand up to Trump, including on behalf of the health of Lake Erie. He has won his races handily in the past.

Mueri has accused Joyce of a lackluster overall record on the environment.