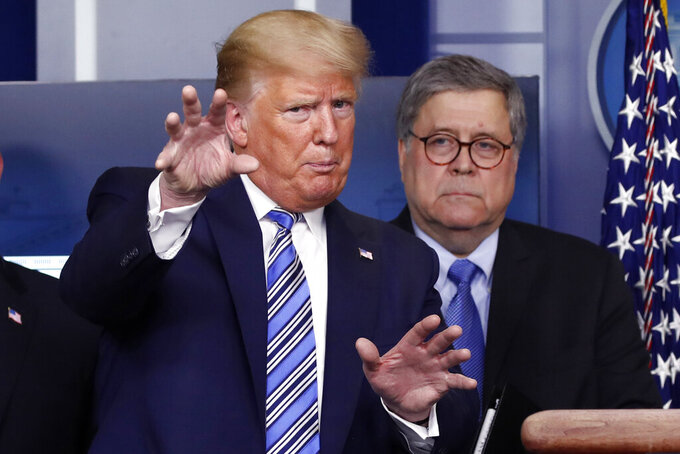 FILE- In this March 23, 2020 file photo, President Donald Trump talks during a briefing about the coronavirus in the James Brady Briefing Room, Monday, March 23, 2020, in Washington, as Attorney General William Barr looks on. Legislation to extend surveillance authorities that the FBI sees as vital in fighting terrorism was thrown in doubt Wednesday as President Donald Trump, the Justice Department and congressional Republicans all came out in opposition. (AP Photo/Alex Brandon)

WASHINGTON (AP) — Democrats on Thursday pulled legislation from the House floor that would have extended FBI surveillance authorities after President Donald Trump and Republicans turned against the legislation, ensuring its defeat.

House Speaker Nancy Pelosi said there will be a new round of negotiations with the Senate over the expired powers the FBI considers vital in fighting terrorism, throwing the future of the authorities into doubt.

A similar version of the legislation had drawn broad bipartisan support in March, including from Attorney General William Barr. But that coalition crumbled this week as Trump threatened a veto and House Republicans who had once voted for the bill quickly followed his lead.

Trump cited his frustration with surveillance practices during the Russia investigation.

On Twitter Thursday, Trump praised “GREAT Republican Congressmen & Congresswomen” who blocked the bill “that would just perpetuate the abuse that produced the Greatest Political Crime In the History of the U.S., the Russian Witch-Hunt. Fantastic Job!”

Democratic leaders announced Thursday morning that they would still consider it, but then reversed, saying there wouldn't be a vote.

“Clearly, because House Republicans have prioritized politics over our national security, we will no longer have a bipartisan veto-proof majority,” Pelosi said in a letter to colleagues.

Pelosi said the House would attempt direct negotiations with the Senate on the earlier version of the legislation passed in March and a similar bill passed by the Senate in May. “It will be our intention to go to conference in order to ensure that all of the views of all Members of our Caucus are represented in the final product,” Pelosi wrote.

The current impasse raised the potential for the surveillance powers to remain expired indefinitely. The provisions, which lapsed when Congress left due to the coronavirus pandemic in March, allow the FBI to get a court order for business records in national security investigations and conduct surveillance on subjects without establishing they’re acting on behalf of an international terrorism organization. They also make it easier for investigators to continue eavesdropping on a subject who has switched cellphone providers to thwart detection.

Democrats also have problems within their own ranks. The leaders of the Congressional Progressive Caucus, which has about 70 Democratic House members, also said Wednesday that they'd oppose the bill, saying the legislation doesn't do enough to protect Americans' privacy.

The House bill passed overwhelmingly in March after Barr negotiated a deal with Republican and Democratic House leaders. But the consensus broke down Wednesday after the Justice Department came out against the legislation, which was amended by the Senate.

Soon after, House Republican Leader Kevin McCarthy, R-Calif., said it was time to take a “pause” on the legislation.

Democratic leaders had argued that very little had changed since 126 Republicans, including McCarthy, voted for it in March. “Your flailing around to find a rationalization for your change of vote is sad," House Majority Steny Hoyer told Republicans in a heated floor speech.

“The only thing that has changed,” Hoyer said, “is that Donald Trump has said vote no.”

With Republicans opposed, Pelosi needed to keep her caucus together to pass it. But losing the progressives — lawmakers who've long opposed surveillance laws — made that a lot harder. On the floor, she pleaded with her colleagues to support the legislation to protect national security and pass reforms to protect civil liberties that were included in the original compromise.

"If we don't have a bill, then our civil liberties are less protected,” Pelosi said.

The only difference between the two bills is an amendment adopted by the Senate with 77 votes. That bipartisan language, sponsored by Sens. Mike Lee, R-Utah, and Patrick Leahy, D-Vermont, would allow more third-party oversight to protect people in some surveillance cases.

The final bill passed the Senate with 80 votes, but the Justice Department’s statement said that amended Senate version of the bill would “weaken national security tools while doing nothing to address the abuses” identified by the Justice Department inspector general in his report on the FBI investigation into ties between Russia and the 2016 Trump campaign.

An inspector general report that documented serious errors and mistakes in how the FBI used its authorities during the Russia investigation. Those problems included errors and omissions in applications the FBI submitted under the Foreign Intelligence Surveillance Act to monitor a former Trump campaign adviser.

Republicans have historically been hawkish on preserving surveillance powers in the name of national security. But Trump's GOP allies have joined him over the last year in demanding that any renewal of the FBI's powers be accompanied by significant new restrictions.

The powers are not directly related to the errors uncovered during the Russia investigation. But Republican lawmakers — and some Democratic civil liberties advocates — have seized on those problems in demanding reforms.

McCarthy said lawmakers passed the legislation with bipartisan majorities before and should try again to negotiate a compromise.

“If the Democrats bring this bill up they’re just playing politics,” McCarthy said. “And this is not something to play politics with.”