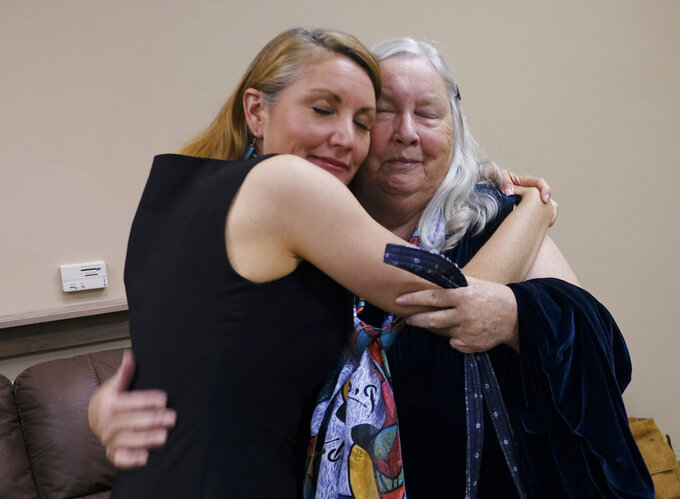 The election is a precursor to a handful of races to fill vacancies in Congress ahead of 2022 midterm elections. Democrats held a 219-211 majority in Congress going into Tuesday’s vote in New Mexico's 1st Congressional District.

Uncertified election results on Wednesday showed a victory margin of 24.5 percentage points for Stansbury — far greater than Haaland's 16-point win in 2020. That even edged past Biden's 23-point win in New Mexico last year.

Stansbury highlighted a working-class, public school upbringing in Albuquerque — her mother was a factor worker and crane operator — and she embraced top-line Democratic initiatives on pandemic relief, infrastructure spending and interventions to slow climate change.

Stansbury leveraged fundraising drives by splitting contributions with other Democratic politicians. Doug Emhoff, the husband of Vice President Kamala Harris, campaigned in New Mexico alongside Stansbury during the final week of early voting.

The Democratic effort contacted voters 350,000 times in its largest field program for the district in more than a decade, state party Chairwoman Jessica Velasquez said.

“We know that we can’t afford to lose a single seat" in Congress, Velasquez said. “I think that this race bodes really well for Democrats moving forward. We’ve seen a lot more Democrats turning out to vote early, a huge amount of enthusiasm, especially since we’ve returned to holding some in-person events and frankly it’s been a great opportunity for us to continue to build Democratic infrastructure.”

Republicans had little to salvage from the lopsided loss.

Moores focused on local concerns about the crime rate in Albuquerque over national politics, and he leveled criticism at New Mexico’s delayed reopening of the economy as the pandemic wanes. The public safety mantra bore echoes of Trump and his condemnation last year of crime rates in Democrat-led cities as he dispatched federal agents to Albuquerque.

Rod Adair, a demographer and political consultant who previously served as a Republican in the New Mexico state Senate, noted that the Republican congressional nominee lost ground in voting margins for each of the five counties represented in the 1st Congressional District, compared with 2020 voting returns.

He described a “moribund” state Republican Party that was unable to help a skilled GOP candidate, and failed to link the economic distress of the pandemic to Democratic leadership in the White House and the New Mexico governor's office.

“The party was invisible,” Adair said of the GOP. “Overriding all of this, New Mexico is migrating leftward, and we've seen that in the political demographics of the state and especially in" the 1st Congressional District.

The 1st Congressional District encompasses Albuquerque, rural Torrance County and other outlying areas that include the Indigenous community of Sandia Pueblo. Libertarian nominee Chris Manning won a little over 1% of Tuesday's vote, and independent Aubrey Dunn Jr. got nearly 3%.

The district’s voters have heavily favored Democratic candidates in recent years. Prior to 2008, the district often backed Republicans for Congress, including Heather Wilson, who later became secretary of the U.S. Air Force under President Trump.

“We’re used to the Pete Domenici Republicans,” Abeyta told KANW radio, in reference to the deceased six-term U.S. senator who retired in 2008. “The Republican brand kind of just wrapped themselves around the Trump brand, and they haven’t shaken loose from it."