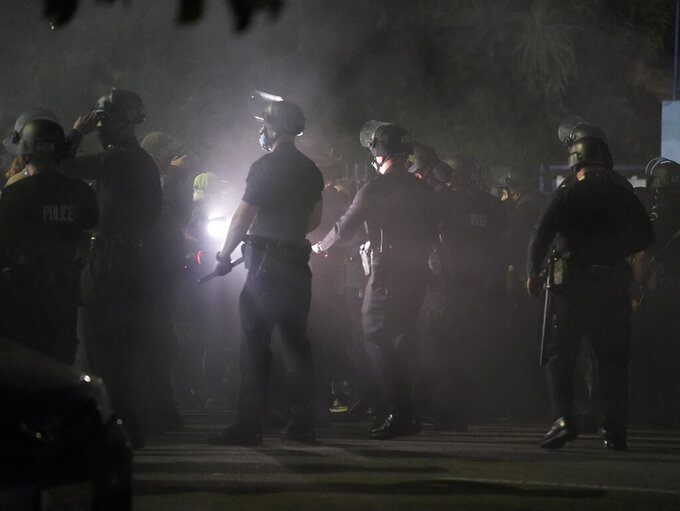 LOS ANGELES (AP) — Demonstrators gathered Wednesday night to protest the planned temporary closure of a Los Angeles park that would displace a large homeless encampment, which has grown throughout the coronavirus pandemic.

About 200 people, including demonstrators and some homeless people, gathered as more than a dozen police cars and some sanitation trucks showed up at Echo Park Lake.

People faced a line of police in helmets on a street near the park, some shouting, “Where do you want us to go?” Some officers appeared to be carrying batons or projectile weapons.

Shortly after 10 p.m., police began herding demonstrators away from one end of the park and later declared an unlawful assembly, allowing arrests.

Police Chief Michel Moore said homeless people would be allowed to stay in the park overnight, but that no one else can enter and the encampment must be vacated within 24 hours, the Los Angeles Times reported.

Antonia Ramirez, 60, was wrapped in an American flag blanket and vowed to stay.

Ramirez, who has been homeless for 20 years and has lived in parks in LA and neighboring Orange County, said she moved into Echo Park Lake the previous night.

“They are now closing the park but there was no notice given ... it’s like a dictatorial, fascist regime," she said. “I’m not leaving. I will be arrested and I will spend my time in jail.”

City Councilmember Mitch O’Farrell, whose district includes the neighborhood just north of downtown, said in a statement that police were asked to support “community safety efforts" while fencing was installed.

“Our homeless service providers will return tomorrow morning to continue their work with the park’s unhoused residents to offer shelter and services to anyone who wants and needs the assistance,” the councilman said.

A few hundred protestors first gathered at the lake just after sunrise Wednesday carrying signs that said “dignity not displacement” and “we need long term solutions.” They argued that the encampment with dozens of tents provides a makeshift community for people with nowhere else to go.

Part of the crowd marched to peacefully rally outside the nearby offices of O’Farrell.

O’Farrell’s office said in an earlier statement that more than 120 homeless residents have been moved from encampments into transitional housing to prepare for closing the popular park with a large lake as its centerpiece. The Los Angeles Homeless Services Authority said at least 44 people were moved into shelters this week alone.

No timeline was provided for how long the park would remain closed. O'Farrell's statement said was necessary to make “extensive repairs” to lighting and plumbing and for general “public safety improvements.”

Homeless residents have slept in the park near downtown for years, but tents have proliferated in recent months. The group Echo Park Tent Community said in a statement that the growing encampment has provided a secure place for homeless people during the public health crisis.

“The biggest pandemic in years actually turned out to be a blessing for us," the statement said. "Without the constant LAPD and city harassment uprooting our lives we’ve been able to grow... to come together as a community, not just unhoused but housed as well and work together for the mutual aid and benefit of each other.”