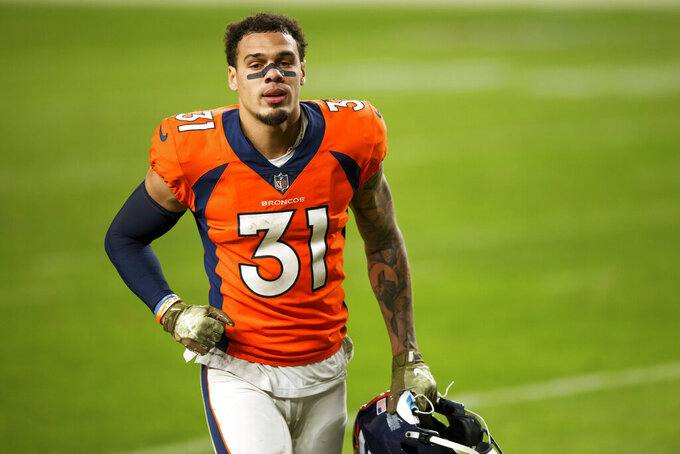 FILE In this Nov. 22, 2020, file photo, Denver Broncos safety Justin Simmons (31) runs off the field after defeating the Miami Dolphins in an an NFL football game in Denver. Simmons is the first player franchise tagged in 2021. NFL teams have until Tuesday, March 9, 2021, at 4 p.m. ET to use their franchise tag to prevent a pending free agent from hitting the open market. (AP Photo/Justin Edmonds, File)

NFL teams have until Tuesday at 4 p.m. EST to use the tag to prevent a pending free agent from hitting the open market.

The Broncos went ahead Friday and tagged their star safety for the second consecutive year. They have until July 15 to work out a long-term deal or Simmons would have to sign his $13.7 million franchise tag tender to play in 2021.

The sooner they work out a deal, the better for the Broncos, who would like some cost certainty heading into free agency, where they have amongst the most salary cap room in the league.

Unlike last year when negotiations never really got going because of the murky financial forecast resulting from the coronavirus pandemic, it appears the sides are headed toward an amicable solution this year.

For another, this year’s franchise tag number is only about $1 million shy of the $14.75 million annual salary of the NFL’s highest-paid safety, Arizona’s Budda Baker.

So, it would seem a solution is in much easier reach this time around.

“Designating Justin with the franchise tag is a procedural move that allows us to continue working on a long-term deal,” general manager George Paton said in a statement. “We are completely focused on making sure Justin remains a big part of the Denver Broncos for many years to come.”

Simmons has collected nearly 300 tackles and a dozen interceptions in the last three years, during which time he hasn’t missed a single snap. He had a career-best five interceptions last season when he earned his first Pro Bowl berth a year after he was named All-Pro for the first time.

When Paton was hired two months ago, Broncos president of football operations John Elway said “one of the biggest things” on the new GM’s to-do list was re-signing Simmons, one of the team’s most productive and popular players.

Simmons has been one of the most active players in the community on a team that’s garnered a reputation for its civic involvement, and last summer Simmons emerged as one of the team’s leading voices on social justice issues.

The move came on the same day the Broncos learned that superstar linebacker Von Miller won’t face charges following an unspecified criminal probe by police in a Denver suburb.

Paton said Thursday that he wanted to keep Miller in the fold but was awaiting word on his legal status.

The Broncos have until March 16 to exercise Miller’s 2021 option, which would guarantee him $7 million of his $17.5 million salary.

The club’s all-time sacks leader, Miller is heading into the final season of the six-year, $114.5 million deal he signed after leading the team to the Super Bowl 50 title.

He missed all last season with an ankle injury suffered just before the opener.