From Derby DQ to doping, a chaotic year in horse racing 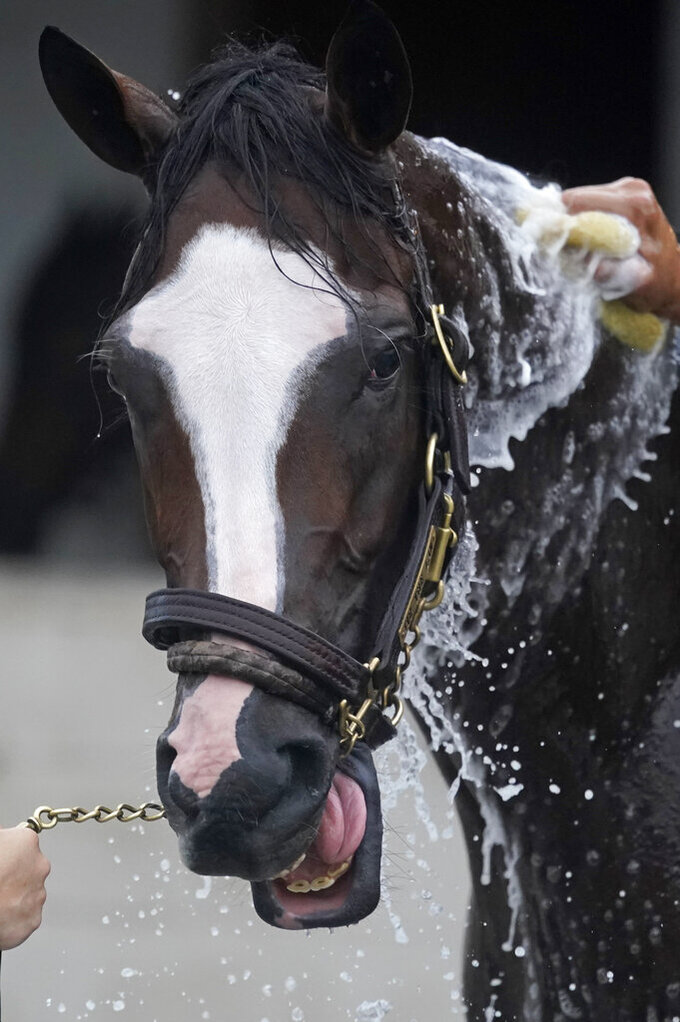 Kentucky Derby entry Tiz the Law gets a bath following a workout at Churchill Downs, Wednesday, Sept. 2, 2020, in Louisville, Ky. The 146th running of the Kentucky Derby is scheduled for Saturday, Sept. 5th. (AP Photo/Darron Cummings)

LOUISVILLE, Ky. (AP) — Maximum Security crossed the finish line first in the 2019 Kentucky Derby. What happened next set horse racing off on a yearlong odyssey of chaos: from a historic DQ to doping, from lawsuits to a pandemic, and now a Triple Crown turned upside down.

Amidst the uncertainty, Tiz the Law has emerged. A victory in the 146th Derby on Saturday would put the colt bred in upstate New York in position to become racing’s 14th Triple Crown winner going into next month’s Preakness.

The coronavirus upended the Triple Crown, turning the series from a five-week sprint into a 15-week marathon and scrambling the order. Instead of leading off on the first Saturday in May, the Kentucky Derby shifted to Labor Day weekend. It's being sandwiched between the Belmont Stakes in mid-June and the Preakness in early October.

It took until days before this year’s race to confirm last year’s Derby winner.

Maximum Security’s owners sued in an effort to overturn the decision by Churchill Downs stewards that disqualified their colt for interference, an unprecedented move. Last week, a federal appeals court upheld a lower court’s decision to dismiss the lawsuit by Gary and Mary West. They have dropped any further appeals. Country House, the second-place finisher, was declared the winner.

In March, Maximum Security’s trainer Jason Servis was indicted, along with over two dozen other trainers, assistants, veterinarians and pharmacists, in connection with a horse doping ring. Federal authorities allege that Servis was part of a network of racing insiders that sold, distributed and drugged horses to enhance their performance. Defense attorneys are waiting to review all of the government’s evidence against their clients. No trial date has been set.

In late February, Maximum Security won the Saudi Cup. However, the Wests have yet to receive $10 million in purse money. It’s been withheld by race organizers pending the outcome of their investigation, which was prompted by Servis’ indictment. Maximum Security has never tested positive for an illegal substance.

The Jockey Club of Saudi Arabia said the coronavirus pandemic has delayed the process, though it said purse money would be paid out to the owners of horses that finished second through 10th.

The coronavirus brought the nation to a virtual standstill in mid-March. Racing eventually resumed and fans went from cheering at the rail to yelling at their laptops and phones while betting online. Fans weren’t allowed at the Belmont Stakes. At first, Churchill Downs was going to allow a limited number of spectators, then decided against it.

“Who would have ever thought you’d run the Kentucky Derby with no fans?” Hall of Fame jockey Mike Smith said.

The Preakness also will be run without spectators, it was announced Wednesday.

Not having fans at any of the Triple Crown races dents the massive economic boost received by the host tracks and cities.

The sport already was on edge after a rash of horse deaths at Santa Anita and other tracks that extended into this year.

“What could go wrong now?” wondered Baffert, whose wife regularly asks him: “What’s the latest? Any more Scud missiles drop?”

Several landed close to home throughout the spring and summer.

On the same day the Kentucky Derby would have been run, Baffert had two horses entered at Oaklawn Park. Charlatan won a division of the Arkansas Derby and filly Gamine won a lesser race. Both later tested positive for lidocaine, a numbing agent that is considered a Class 2 drug. Both horses were disqualified and stripped of their purse money. Baffert is appealing his 15-day suspension, which could be heard by the Arkansas Racing Commission in mid-September.

Gamine is the early even-money favorite for the $1 million Kentucky Oaks on Friday.

Charlatan and Nadal were Baffert’s top two Derby candidates. Charlatan was sidelined by a minor injury; Nadal got hurt and had to be retired. The five-time Derby winning trainer brought two other colts to Louisville.