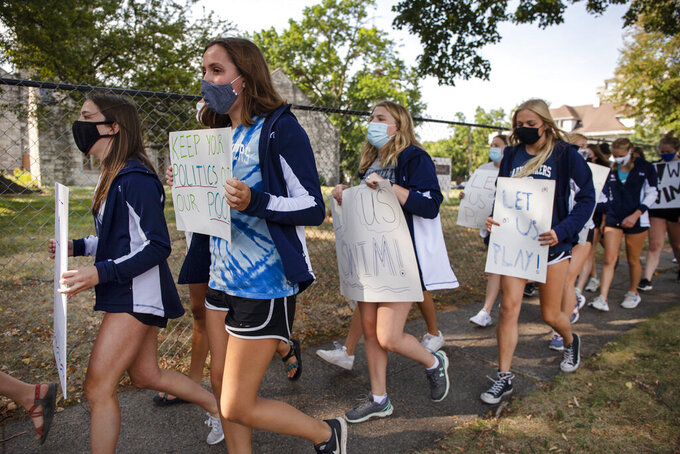 Des Moines Public School students and supporters march from Roosevelt High School to the Governor's Mansion at Terrace Hill to protest the cancellation of fall and winter extracurriculars on Sept. 7, 2020, in Des Moines, Iowa. All in-person activities were suspended this month as the district's classroom instruction remains virtual. (Olivia Sun/The Des Moines Register via AP)

DES MOINES, Iowa (AP) — Hundreds of students from the Des Moines Public Schools and the Ames Community School District marched to the governor's mansion Monday to protest the decision to suspend sports and start the school year online.

The “Student March for Fairness” comes after the Iowa High School Athletic Association told the schools last week that all in-person activities and sports will be suspended starting Tuesday.

“My senior year and my school life should not be a pawn in a political game,” Tabith Keith, a Roosevelt High School senior who has been active in marching band and volleyball, said in a news release.

The students say they want fairness and equity to compete in fall and winter activities.

The march comes as students and their families await a court ruling on whether to allow the Des Moines school district to temporarily move completely to online classes rather than comply with a state order intended to ensure children return to at least partial in-person classes.

Polk County Judge Jeffrey Farrell said Friday he hoped to reach a decision on the temporary injunction by Tuesday, when school is supposed to resume for the 33,000 students in the Des Moines district. Most other school districts in Iowa already have resumed classes.