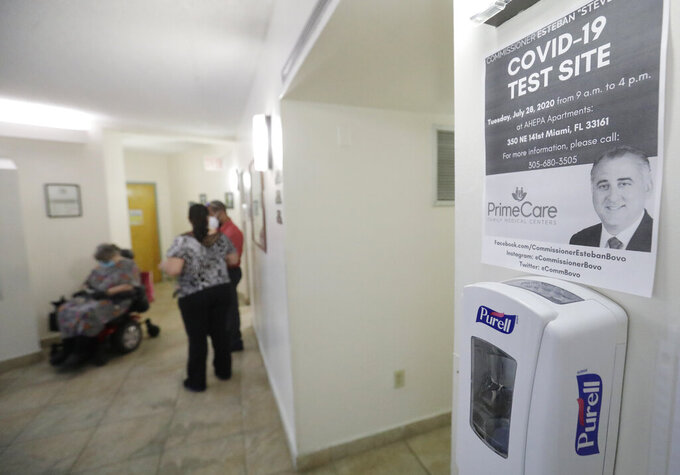 ST. PETERSBURG, Fla. (AP) — Republican Florida Gov. Ron DeSantis said he's thinking about opening up nursing homes and assisted living facilities to visitation after months of touting his efforts to protect what he says are the people most vulnerable to the coronavirus.

DeSantis made his comments after a discussion with doctors at an Orlando hospital on Tuesday. He said there are rapid tests that can ensure visitors are not infected with the virus and loneliness is one of the costs of the virus.

“It'll be a 15 minute test. If you have the ability to do that, then I think that we need to start to talk about visitation again,” DeSantis said. “I really, really worry about the toll that the isolation has had on people in long-term care facilities.”

Even as Florida coronavirus cases and deaths have spiked, DeSantis almost daily has talked about measures he's taken to protect people in long-term care facilities, ranging from outfitting an RV to do rapid testing for employees and residents to banning outside visitors and prohibiting hospitals from discharging COVID-19 positive patients to long-term care facilities.

“It was the right decision, I think it has kept virus out that otherwise would have gone in, but it does come at a cost, and I think folks really want to have that emotional and personal connection with their loved ones, and if there's ways we can do that, than we should do it,” DeSantis said.

Florida has banned nursing home visits since mid-March, and barred the return of patients testing positive for the virus to nursing homes that lack an isolation ward. The state also is now requiring staff to be tested every two weeks, though current backlogs in receiving testing results in some cases limits the effectiveness of this policy.

Jay Solomon, CEO of Aviva senior living campus in Sarasota, responded to the governor's comments and agrees that the isolation and loneliness are taking a toll on residents, but he fears it’s not safe to reopen yet.

“We cannot open our campus, risking the lives of our residents, while the greater community and the state continue to see rising numbers of COVID-19 cases,” said Solomon. “In my mind, senior living communities can only open after the state takes more direct action in controlling the spread of COVID and we see the state-wide positivity rate drop to under 5% in comparison to the 12.7% we are at today.”

He said his facility had still not received its 15 rapid testing equipment. He tried to purchase it for the facility, but was told it wouldn’t be available until October and he said there were no details from the state on the logistics of the tests.

“Without the means to rapid test, and going further, having proof that rapid testing is accurate, I worry about the danger our actions will put residents in.”

During some periods earlier in the pandemic, roughly half of the deaths being reported daily in Florida were linked to nursing homes. In the recent resurgence of Florida’s outbreak, that proportion has dropped to about a little more than a third — or an average of 45 deaths per day linked to nursing homes over the past week as compared with an average of 132 overall.

Of the approximately 6,100 coronavirus deaths in Florida, 2,760 have been residents and employees at long-term care facilities.

Florida's death count spiked to a new height Tuesday with 191 reported fatalities, according to the state Health Department.

The health department also reported 9,230 new cases on Tuesday, bringing the total for the pandemic to nearly 442,000.

The fatality statistics on Tuesdays typically include those over the weekend that were only recently reported.

Statistics show the number of patients treated in hospitals statewide for the coronavirus was steady over the past 24 hours at just over 9,000 — down from about 9,500 a week ago.