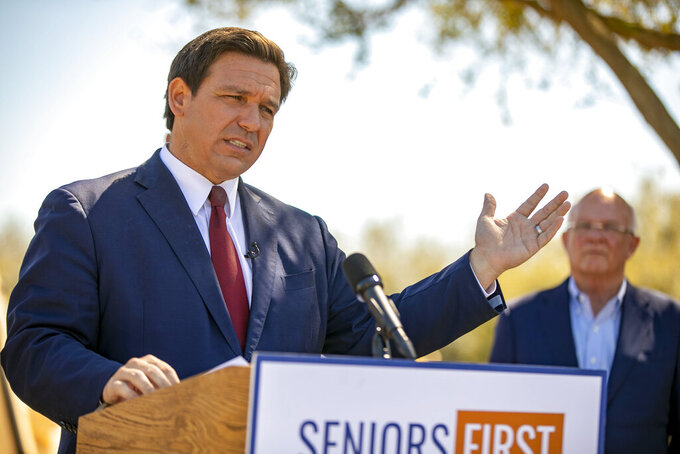 FILE - In this March 5, 2021 file photo, Florida Gov. Ron DeSantis speaks to the media as he visited the drive-thru COVID-19 vaccination site at On Top of the World in Ocala, Fla., Repealing statewide mask mandates and criticizing the Biden administration’s unemployment-based formula for distributing billions in federal aid has put Republican governors and their approach to handling the coronavirus pandemic back in the spotlight. (Alan Youngblood/Ocala Star-Banner via AP)

Florida Gov. Ron DeSantis on Wednesday outlined what he thought were acceptable topics to be taught in civics curricula that he said would get a $106 million boost thanks to pandemic-related federal funding directed at states.

Under the governor's proposal, teachers who get credentialed in teaching civics would get a $3,000 bonus. Some $16.5 million would be devoted to training teachers and principals in civics education. That training would come from civics “coaches," in-person seminars and virtual learning.

“There is no room in classrooms for things like critical race theory," DeSantis said.

Critical race theory examines the way race and racism influences politics, culture and the law. According to Purdue University, critical race theory scholarship shows how racism continues to be persuasive and why it denies individuals their constitutional rights.

Last year, then-President Donald Trump, whose support was crucial for DeSantis winning the Governor's Mansion, cracked down on diversity training at federal agencies that employed critical race theory. Trump's memo came after the U.S. spent a summer reckoning over racial injustice in policing and other spheres of American life.

DeSantis said the civics education should lessen the polarization currently in the U.S. by giving everyone a common foundation of values.

“No matter if your family came on the Mayflower or you became a naturalized citizen, these principles belong to you," DeSantis said.