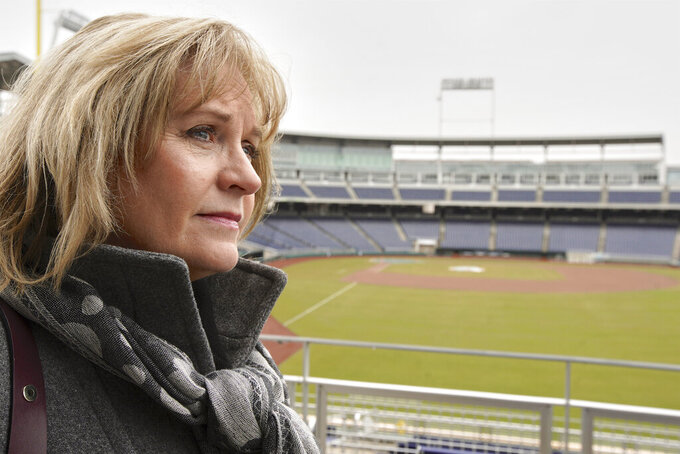 In this March 23, 2020, photo, Kathryn Morrissey, Executive Director of College World Series Inc., speaks in Omaha, Neb., during an interview with the Associated Press, with TD Ameritrade Park, home of the College World Series, behind her. The Division I baseball championship, decided in this city of just under a half-million for the past 70 years, is among the many sporting events canceled or postponed because of the coronavirus pandemic. (AP Photo/Nati Harnik)

OMAHA, Neb. (AP) — Rich Tokheim's sports apparel shop is right across the street from TD Ameritrade Park. More than half his annual revenue comes in the 11 or 12 days of the College World Series each June.

“We're here," he said, "because of the College World Series. It's just so many people.”

Those people won't be in Omaha this year. The Division I baseball championship, decided in this city of just under a half-million for the past 70 years, is a prominent sports casualty of the coronavirus pandemic — a blow not just to the ledgers and coffers of local businesses but to the identity of the city itself.

Omaha has long prided itself on hosting the eight-team tournament and even built $100 million TD Ameritrade Park a decade ago in exchange for an NCAA promise to keep the CWS here through at least 2035.

The 24,000-seat stadium is dark 50 of 52 weeks a year, except for Creighton home games in front of small crowds, but for those two weeks each summer, it's the place to be. More than 332,000 people attended the 15 games a year ago and thousands more were outside tailgating, patronizing bars and restaurants, or visiting the Omaha Baseball Village shopping and entertainment area.

Average occupancy in the metro area's 15,000 hotel rooms was 85% during last year's CWS, with a high of 95% on opening day. Thousands of full- and part-time jobs are tied to the event. The economic impact has been estimated at $74 million per year, with more than $6 million generated in local and state taxes.

“My heart bleeds for those folks,” said Kathryn Morrissey, executive director of the local organizing group College World Series Inc. “It's their Christmas, our Mardi Gras for our community, when we celebrate.”

Instead, there is a void this summer for people who have grown up with the event and made it a tradition — a blow familiar elsewhere across the country. The Associated Press is examining how the cancellation or postponement of iconic sporting events impacts some of those communities.

The CWS started in 1947 in Kalamazoo, Michigan. It moved to Wichita, Kansas, for 1949 before a group of local businessmen brought it to Omaha in 1950 and helped keep it afloat here after it lost money 10 of the first 12 years.

Crowds at the old Rosenblatt Stadium grew and the memories piled up, from Dave Winfield's dominant pitching and hitting for Minnesota in 1973 to the complete game by Roger Clemens to help Texas beat Alabama for the championship a decade later. By the 1980s, ESPN was airing hours of CWS games.

Ed and Carolyn Conrath of Omaha started attending games in 1974. They bought two season tickets on the first-base line four years later and still own them. The Conraths enjoy the games, of course, but they also look forward to visiting with friends they see only at the CWS.

“You get to know people around you,” Carolyn Conrath said. “We've watched entire families grow from little children into parents of teenagers and adults now."

Her favorite baseball memory is Whit Merrifield's walkoff single in the 11th inning to give South Carolina the 2010 championship in the final game played at Rosenblatt, but it's about far more than baseball for devoted fans of the CWS.

Carolyn laughed as she told the story of the streaker who interrupted a game in 1974, swinging a pink plastic bat at home plate and taking off toward third base before security caught him as he tried to exit through right field. She said she enjoys the tradition of fans batting around beach balls or trying to start the wave, and the people in the right- and left-field bleachers yelling clever chants at each other.

ESPN college baseball analyst Kyle Peterson grew up in Omaha and pitched for Stanford in the CWS in 1995 and '97 before a four-year pro career.

“For all of us, there's certain things in your life you just assume are going to be annual things, and this is one,” Peterson said. “There was nothing that you would think would be enough to interrupt this.”

All-time college wins leader Mike Martin, who brought 17 Florida State teams to the CWS, said he's as sad for Omaha businesses and fans as much as he is for the players who will miss out.

“It puts everybody in Omaha and the rest of college baseball in a sad state that we've got to wait a long time before we can get that excitement built up again,” said Martin, who retired last year. “It's not easy to accept this, but the excitement will return, good lord willing, and we'll be right back where we were.”

The Omaha Baseball Village provides temporary employment for about 400 and generates hundreds of thousands of dollars from vendors renting space and nightlife. Marketing director Jenny Peters said more than 250,000 people come through the village during the CWS.

“The College World Series to Omaha is such a signature event, an identity for the community,” Peters said. “To lose that, it’s more than jobs and revenue. There’s a little bit of heart that goes into it from everyone who lives here and works here and gets to show off our town.”

Tokheim, who has operated sports apparel stores in Omaha for more than two decades, has an ideal location for “The Dugout” — an infield grounder away from the stadium's front door. He employs about 30 people during the CWS, some 25 more than the rest of the year.

Tokheim said his shop should survive one year without the CWS, but that might not be the case for neighboring businesses.

“I think we're all just stunned right now,” he said.