Despite global reopening push, some jobs are gone for good 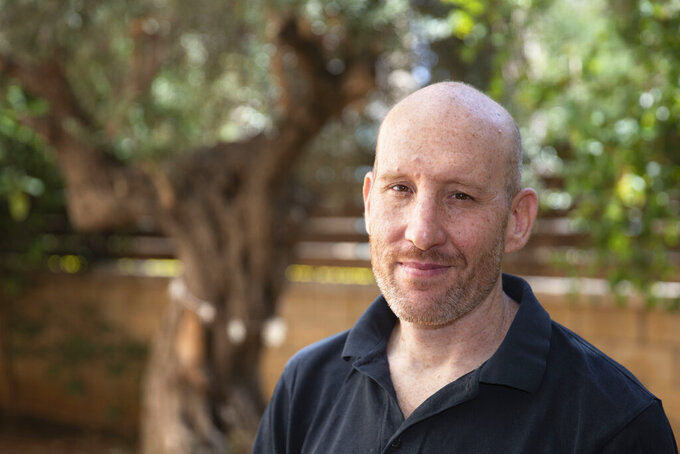 Israeli software developer Itamar Lev poses for a photograph at his house in the central Israeli city of Kfar Saba, Thursday, June 4, 2020. At first, when the coronavirus broke out, Lev was told to work from home. Then his salary was slashed 20%, his dining allowance was taken away and a long-term savings fund frozen. That's the harsh truth facing workers laid off around the world, from software companies in Israel to restaurants in Thailand and car factories in France, whose livelihoods fell victim to a virus-driven recession that's accelerating decline in struggling industries and upheaval across the global workforce. (AP Photo/Sebastian Scheiner)

BANGKOK (AP) — Factories and stores are reopening, economies are reawakening – but many jobs just aren’t coming back.

That’s the harsh truth facing workers laid off around the world, from restaurants in Thailand to car factories in France, whose livelihoods fell victim to a virus-driven recession that’s accelerating decline in struggling industries and upheaval across the global workforce.

New U.S. figures released on Friday showed a surprise drop in joblessness as some of those who were temporarily laid off returned to work. But it's only a dent in the recent months' surge of unemployment, which remains near Depression-era levels. In a pattern repeated across the world, high unemployment means less money spent in surviving stores, restaurants and travel businesses, with repercussions across economies rich and poor.

“My boss feared that since we come from Kibera (an impoverished slum), we might infect them with COVID-19, and so he let us go,” said Margaret Awino, a cleaning worker in a Nairobi charity. “I don’t know how I can go on.”

As the virus and now protests across the U.S. have shed new light on economic inequalities, some experts say it’s time to rethink work, wages and health benefits altogether, especially as automation escalates and traditional trades vanish.

When Wannapa Kotabin got a job as an assistant chef in the kitchen of one of Bangkok’s longest-established Italian restaurants, she thought her career was set.

But five years on, she’s in line with more than 100 other jobless Thais outside an unemployment office.

The government ordered all restaurants closed in March to combat the coronavirus, and 38-year-old Wannapa has been spending her savings on food and shelter.

When restaurants were allowed to re-open in May, Wannapa’s restaurant told staff its closure was permanent.

“I never thought this would happen,” she said. “It’s like my heart got broken twice.”

Around the world, new virus safety rules mean restaurants and stores can’t hold as many people as they used to, so they can’t afford as much staff. Many can’t afford to reopen at all.

Bangkok’s restaurants are firing, not hiring, she said.

“I will have to go on and keep fighting,” she declared. “If there is any job that I can do, I will do it.”

Wannapa’s unemployment benefit can only tide her over for so long. She said if she can’t find work, she’ll have to return to her family’s rubber plantation to start life all over again.

When the coronavirus first broke out, Israeli software developer Itamar Lev was told to work from home. Then the online advertising company he worked for slashed his salary 20%. Finally, just as restrictions started to ease, he was fired.

Lev, 44, is among hundreds of thousands of Israelis out of a job as a result of the pandemic, more than 25% of the workforce.

Tied to the American market, Lev’s company’s advertising revenue dried up and they had to make cutbacks. Lev said he was treated respectfully, and sees himself as simply a victim of the times.

He is already preparing for interviews and confident he will find a new position soon. In a country versed in disruptions from wars and security threats, he said Israelis have built up a certain resilience to upheaval.

Still, he said this time feels different. His wife, a self-employed dance instructor, has also seen her income temporarily evaporate, forcing the couple to dig into their savings.

“The ‘comeback’ is going to take longer,” said Lev, father of a 5-year-old girl. “It’s a difficult period. We’re just going to have to take a deep breath and get through it.”

Perhaps hardest-hit by virus job losses are low-paid service workers like 54-year-old Awino, who lost her job after 15 years as a cleaner at one of Mother Teresa’s charities in Nairobi.

Awino shares a shack with her four daughters, including one who has epilepsy and requires costly medical care, and they share a communal toilet nearby. She hasn’t seen her husband in nine years.

Without her regular $150 monthly salary, she now buys raw chicken and fries it on the streets for sale.

“Ever since I was fired because of COVID-19, I put all my efforts into my business,” she said.

Some days she earns more than what she was making at her old job, but it’s hard work, and unpredictable. City council and health inspectors are known to raid informal street vendors, who are often arrested and have their goods confiscated.

Awino has no choice but to take the risk, and she’s not alone: Hundreds of thousands of Kenyans have also lost their jobs because of the pandemic.

On a global scale, the industry perhaps most vulnerable is aviation.

Germany’s Lufthansa is losing a million euros an hour, and its CEO estimates that when the pandemic is over it will need 10,000 fewer workers than it does now. Emirates President Tim Clark signaled it could take the Dubai-based airline four years to return to its full network of routes.

The ripple effect on jobs in tourism and hospitality sectors is massive.

Countries like the United Arab Emirates are home to millions of foreigners who far outnumber the local population – many of whom have lost their jobs. Their families in countries like India, Pakistan, Nepal and the Philippines rely on their monthly remittances for survival.

Egyptian hotel chef Ramadan el-Sayed is among thousands sent home in March as the pandemic began to decimate Dubai’s tourism industry. He returned to his wife and three kids in the city of Sohag, about 500 kilometers (310 miles) south of Cairo. He has not been paid since April.

“There’s no work here at all,” he said. “Even tourism here is operating at 25% so who’s going to hire here?”

He sits idle, relying on his brother and father for support. He is hopeful the Marriott hotel where he worked will bring him back at the end of the summer when they plan to re-open.

So why aren't all the jobs coming back, if economies are reopening?

Some companies that came into the recession in bad shape can no longer put off tough decisions. Meanwhile, even though reopened cities are filling anew with shoppers and commuters, many consumers remain wary about returning to old habits for fear of the virus.

"Some firms that were healthy before governments imposed shutdowns will go bankrupt, and it could take a long time for them to be replaced by new businesses,” Capital Economics said in a research note. “Other firms will delay or cancel investment.”

It estimates that a third of U.S. workers made jobless by the pandemic won’t find work within six months. And some European workers on generous government-subsidized furlough programs could get laid off when they expire, as companies like French carmaker Renault and plane maker Airbus face up to a bleaker future.

Holger Schmieding, economist at Berenberg Economics, warned: “The COVID-19 pandemic and the ensuing mega-recession may shape political debates and choices for a long time."